I realize right away, if you are Baptist and from Bama...you are trying not to review this blog because of the title. Typically, anything thats a pleasure....has to be in the arena of sinful too. The truth is....it ought to be....we usually look the other direction. Plus, as long as you are Baptist, and not Catholic, you don't have to go over to the dark stinky room and confess to the priest.

Guilty pleasures are something that you look upon and often desire...maybe even crave. You might go out of your way. You might trade something of value to get this thing of pleasure. You might be extra nice....just to get a moment of this pleasure. Life is not life....without these pleasures. So these are mine.

1. Chocolate. No, not Snickers or a candy bar. We are talking about rich chocolate. Liquor-filled chocolates. Mint chocolates. Just a taste and a moment to relax, and I can be unstressed. I feel relief of some sort. I don't want the keys to the chocolate store....I just want a small bit to gain a moment of pleasure.

2. An ice tea with a big slice of lemon. No, not that sweeten tea....I want pure unsweetened tea, with a half a lemon bogged down in the middle of the drink....squeezed as much as you can. Make it sour....and I'll guzzle it down. It doesn't matter....a hot day or a cold day....its all the same. It purifies the soul and its better than coffee.

3. Aaron Copeland. He wrote marvelous pieces of American classical music. I could probably start a trip in Charleston and drive to Seattle...with just one CD in the car....and it'd be Aaron Copeland. I can listen to the music 365 days out of the year. I come out of a Copeland trance and feel positive.

4. Catfish and hush puppies. After sitting down at a southern catfish shack....enjoying a great meal....and then I can walk out and I can feel like it was a $50 meal but I paid less than $8 for it. True, it may be bad for me and too greasy....but it is a guilty pleasure.

5. An afternoon with a Border Collie. It was only after I left home, that my dad came to acquire Border Collies as the family dog. I came to discover that they were the only dog that sat waiting for you....twenty-four hours a day....wanting to be associated with you. Sure, they'd retrieve the ball a thousand times without stopping, and they'd demand to sit by you in the truck each and every time you went out. Its a calming effect, to make you forget your worries while you concentrate on a silly dog.

6. A boat trip. I came to discover in Germany....these extraordinary boat trips....up the Rhein River for example. You get on at one spot....find a seat and get a beer....and then just watch mile after mile of scenes go by. I could sit all day on a boat trip. My blood pressure likely drops by twenty percent.

7. Watching Gary Cooper in "Along Came Jones". I've watched the movie at least fifteen times and never tire of watching it. Its like Gary is winking at you all the way through....barely acting....and the story carries the entire movie.

8. Sitting in a mall. I could sit for hours in a mall...just observing....just watching....just viewing the lives of other people. Perhaps I am infringing upon their lives and learning their worst secrets or woes or gossip. But it is an guilty pleasure which I enjoy.

9. Raking leaves and burning them. Yes, I will admit a great crime and passion here. I realize that you environmentalists hate me. I'm the guy who burns mounds and mounds of leaves in the fall....and snuffs the burnt leaves feverishly. Getting high? Yes....burnt leaves give me a rush. Not a dopey rush....but a rush. I'd actually like to stop at houses, and ask people if they'd let me rake their leaves....and burn them....just to get that extra rush. I sit and pause over houses that have a dozen trees out front....it brings a tear to my eye to think of November and the amount of leaves on the ground.

10. A conversation that steadily moves along. To sit upon a porch or under a tree or in a pub....and have a conversation that continues like the mighty Mississippi....without end. It is a guilty pleasure, no doubt. Never getting winded....always on the sarcastic edge....and taking on the dynamic and the non-dynamic topics of life.

So there are my ten guilty pleasures. I believe I didn't offend any Baptists....and if I did....open up the bottle of Jackie D's that you keep under the sink and pour three shots...you'll get over it. 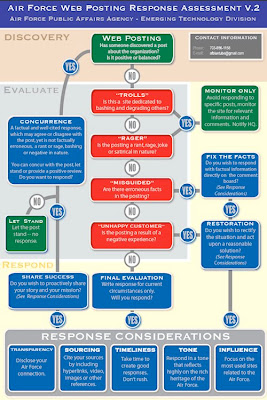 Around a week ago....somewhere in the Air Force world....some folks put out a twelve-point plan. The plan is basically an attempt to put a method out there for Air Force personnel to "counter-blog". They made it into a nice graphic that even Grandma could read.

I realize you are sitting there....sipping your morning coffee, and wondering..."counter-blog"?

They've decided that there are just too many "wrongs" being written into blogs and the Air Force mission now includes "counter-blogging". So this plan includes guidance on how airmen handle "trolls," "ragers" -- and even well-informed online writers.

These guys can now offer a "factual and well-cited response [that] is not factually erroneous, a rant or rage, bashing or negative in nature."

The guidance even gives them the idea of just letting the blog stand, fixing the blog, or even offering a fresh look at the facts.

There are three things about this guidance to occurs to me as I ponder the nature of this "guidance".

Second, it assumes that you know the facts. I would be curious who told you the facts....the Air Force? Could the facts be misread by the Air Force...like the 10,000-odd facts that they've spoken about over the past twenty years which really weren't concrete facts? Did the general simply say something and was it taken to be a fact? Did Sargent Snuffy at the Personnel Office say this was a fact? This is kinda unclear and I'd be wondering just how far facts could be read.

I am reminded of a episode around a dozen years ago where one major command in the Air Force came to point where they stated their "facts". Another major command stood up and had a totally different "fact" sheet. Both were half-way right....but they stood there in debate and made facts into swords....and amused most of the folks who were watching. The curious thing was that this debate was all done in e-mail format and everyone got their daily dose of facts. Eventually, both stopped arguing...and came to a mutual fact situation.

I'm thinking this is another Air Force idea that will be dumped quickly....with no real support.

As for you Air Force bloggers who might want to correct me or bring me to the real truth....save a keystroke or two....sip a Mountain Dew....clip your toenails....toss a ball for your dog to retrieve....because those would better investments of your time....rather than to argue with me. Life is damn short....don't let the day job dictate your off-time.
at Sunday, January 11, 2009 No comments: