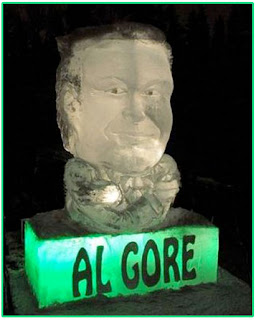 Up in Fairbanks, some folks did a five-ton statue of Al Gore, in ice.

The answer is.....well....we will just have to wait and see. I'm having hopes that global cooling will help save Al, one way or another.
at Wednesday, January 21, 2009 No comments: 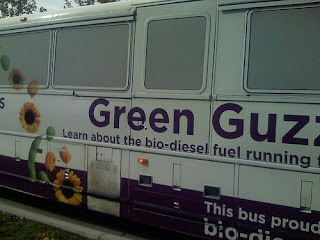 I have no confidence in people to grasp and understand environmental science and real science. In today's news, up in the Bloomington district of Minnesota, they decided to close the district schools.

The state had apparently mandated the use of biodiesel.....but what the idiots had thought about....when it gets cold enough.....biodiesel will clog up. Naturally, Minnesota got cold enough.

The state had tried to run the buses, but kept having problems in keeping them up and running. Naturally, the buses got behind schedule....in freezing weather....and a bunch of kids got all froze up.....which naturally upset a number of parents. So far, the smart science guys and the environmental folks are keeping their mouth shut.

For those who aren't aware.....once you get way down in the temperature...biodiesel is kinda like jelly. Normally.....just 15 or 20 degrees won't do the trick. You'd have to be down below zero or more. In Bama or Texas...it would hardly ever happen. In Montana or Minnesota...this might occur a dozen days out of the year. So its hard to imagine how these environmentalists in the state sold everyone on this idea, and didn't explain all the science involved, but then....they really don't know the science.

Based on continuing analysis of the fuel mix....the mixture of parafin in the normal diesel (the 98 percent side)...was the trigger to the freezing of the fuel......NOT the 2 percent bio-mixture.

The curious thing....who approved this particular mixture in this region....is unknown. The rest of the state? No one is saying much on problems....yet they had the same weather and temps. I'm thinking that they bought their mixture from one dealer.....a small-time guy....and there was something of a discussion on the mix....and this was the "fix". Bio-diesel isn't exactly a huge money-maker or massive requirement.