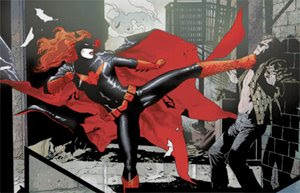 Apparently, its been decided by DC Comics, that the new Batwoman angle....will be that she's gay.

Yep, I sat and read that and came to a long, long pause.

A lesbian Batwoman? Could it be? Could we accept such?

Then it occurred to me....that there is plenty of room here for change.

So I've been thinking....the Flash.....in my mind....ought to be a real authentic redneck, from Bama. Hawkman, ought to be a leather-tights kinda guy into bondage. Robin? He ought to be a homeless kid who Batman raised up and becomes a liberal comic hero. Green Arrow, ought to be a Rush Limbaugh-true conservative.

I was even sitting there and thinking.....man, that Catwoman gal and Batwoman....could meet up at some party in civilian clothing....and get all lezbian-like.....then discover they were archenemies. This would turn into a fine love-hate-love story. Maybe even have that Batman dude wander in and sweep both of them off their feet. Well....at least in a fantasy world, it might happen.

For a number of people...it means little. The media pumped up the week, with various articles and specials. For the religious, it was a tad too much and they are plainly upset. For science geeks, it was a pretty amazing week to review his history and legacy.

About twenty years ago....I finally sat down and read up on Darwin and his ideas over evolution. Two hundred years ago...it would have been impossible for most people to consume his ideas and find agreement. Fifty years after the book.....a number of scientists came to the basic conclusions of Darwin and advanced the cause.

Religious figures.....bluntly, have no agreeable nature over this topic. Evolution is not debatable in their mind.

After I finished all of my reading....I had a long pause....for probably six months....and then came to the conclusion that demanded logic.

There is nothing around me that is staying the same. Most everything is in a cycle of change. Its changed by nature, by man, or by the climate.

The word evolution is probably wrong to use in every aspect, but we have no real word that fits easily into this concept of modification.

The cave man? We have enough evidence in the past year to show that his species came to die out because he couldn't adjust to the warming climates of his land.....he was built for cold weather and didn't migrate to meet that problem. He stayed on until his entire species probably "heated" itself out of existence. Its not 100 percent proven....but we are fairly close on this pronouncement.

I can consider Caveman Joe to be a cousin of our current species but I seriously doubt that either truly came from each other. They were simply cousins that were in the same group and they eventually came to a parting. There are other "man" species that we are starting to understand and they were "cousins" too....but still they were a bit different.

So I am a Darwin guy. I can sit and have a belief in God and believe that maybe all things did come through one original point....but we came to evolve and change after that point. I realize I'm probably opening up some hostile feelings....but I'm a logical guy. Nothing is truly remaining the same.....we are all under some type of change.

As I'm sitting here and typing away....the muscles in my fingers are fully developed more than a guy from 300 years ago. In 10,000 years, I fully expect my relative on down the line.....will have a totally different finger-build compared to what I have today....strictly because of key typing.

So I am pausing on this week, for a moment to remember Darwin....who was just a regular guy who ran off to the south Pacific and saw a bunch of stuff that just didn't fit into logical views of life, and he needed an answer that went a bit further. He was a thinker....which we probably need more of today.
at Thursday, February 12, 2009 No comments: