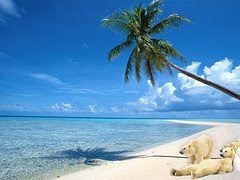 Polar bears....for those who aren't paying attention or listening to the environmental group WWF....are about to die off.....or at least thats what they insist. Today.....there was this statement by the WWF folks....."No sea ice equates no polar bears. It's really that simple."

Geoff York, who is a WWF polar bear expert, spoke these sad words. Well....sad words if true. It'd be something else if they were totally wrong in nature.

Geoff was speaking over in Norway.....prior to the big eeting where representatives of several countries bordering the Arctic are supposed to meet and how to safeguard the bear. The WWF policy, for those who haven't grasped it....is that these Arctic countries have a special obligation to surge up efforts to reduce the evil emissions of greenhouse gases.

I kinda wondered about this. Since we know that the Arctic region has melted and iced up over and over.....they should have all died. Its funny....they haven't.

I'm guessing that the wise folks who claim they are polar bear experts....haven't really tested polar bears that much. The mere suggestion that polar bears are survivors....might disturb some folks....especially the WWF folks. I'm guessing that they have a pretty fair agenda in place and big plans. Naturally, what comes and goes with the polar bears....is secondary....and maybe thats the reason why folks kinda smile when WWF appears.
at Thursday, March 12, 2009 No comments: