My company is not one that you'd really like to work for. After you figure the salary and the diminishing benifits package.....you start to laugh. This week....we went onto another level with the laughing.

Normally, all evaluations are done in Feb/Mar timeframe. At the end of March or the beginning of April....they are absolutely complete. We get our one, two or three percent payraise in April. Things have run this way for the past five years. Well....we got sholved into another division back in the spring of 2008. This one, which we won't name....is run by a bunch of retired Army commanders. Needless to say.....there have been issues, and this week...the eval became one.

So the management squad came up and said that the new division has a different schedule with evaulations (funny, back in spring of 2008....they never mentioned this). They do evaluations in November. Hmmm.....so eight months away?

I sat there....thinking. Now, if you were real management and just had a new group put under your management team....you'd explain all the rules and this eval business would be a big deal (at least in the top ten). But apparently, they let this problem slip.

The curious thing is that they are bidding on this contract with the government right now....and might be thinking that they won't win....so they can dump everyone in November, with no pay raise.

Another interesting thing about this evaluation.....like the previous ones....we write them ourselves. Normally, it was a checked box thing....twenty checked boxes and then a score, then a payraise tied that plus-up or plus-down. However, our friendly Army management folks suddenly inserted a 20-line area and want a real written evaluation (like you'd do in the military). This naturally added four hours of time onto our schedule in figuring out twenty great lines.

As some of you know....I'm a Socrates-thinking individual. And a bit sarcastic. So I decided....to hell with evaluations. I know they won't read a line of this. So I kinda inserted the following two lines into the evaulation:

Working through various projects with Socrates-like thinking, settled issues and problems as they arose. Took the progressive attitude of letting those who would move the world, first move themselves.

If you stop and read this....and know Socrates....he spoke the second line....although in fancy Greek or Latin. I'm betting they never read a line of this, and let it go. But if you stop and read carefully....you basically see that I'm not helping a bunch of fools rush into unsound judgement. I'm standing as long as possible and waiting until their magnificent change has stalled, before I step in to fix the entire mess.

So thats my eval story....my company is not exactly the New York Yankees, and I'm dissolving Socrate's legend into myself....step by step.

Just a Moment of Analysis

Just an analysis of news and what people are watching. The stat's for this week?

The curious thing here...not that Fox is way up at number one....but that the Comedy Daily Show and Colbert Nation....are beating CNN's Cooper and MSNBC's Maddow.

What does this mean? People would actually prefer to watch some bit of comic news relief....rather than hard-hitting news from Cooper or Maddow. And the ability of Jon Stewart to outscore MSNBC's king of news (the Olbermann)....is totally whacked out.

If you had stood there twenty years ago and predicted that news in America would have been chiefly controlled by Fox News or some comedians....you would have been laughed out of the building.

So the question is....can Jon Stewart and Mr. Colbert build onto this and take on the king's of Fox? Thats what I'd be interested in seeing.

But behind all of this....you have to wonder....as hard as ABC, NBC, CNN and CBS are working....they have comedians who are putting up the daily news....and getting better numbers. This is a big indicator that mainstream news....which we all got addicted to over the past decade.....is dying.

Like the newspapers....they can't change or do the job....so the replacement team is on the field and playing better than the normal team. Its an indicator of things to come.
at Saturday, April 18, 2009 No comments: 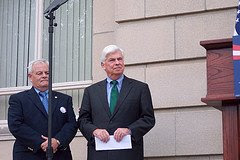 Its been an amazing month for Connecticut Senator Chris Dodd. Chris showed tremendous lack of skills in grasping the financial mess that the country is going through. Chris got noted for some really great property loans....so his star has been dimming over the past month.

Someone sat down this week, and looked at his campaign donations over the past four months. Its interesting....the bulk of folks interested in Chris.....aren't from Connecticut. In fact, there were only five residents in Connecticut who felt like writing him a check. From the $600k he took in.....the bulk came from out of state....special interest groups.

So five residents donated a total of $4,250. Then we have 400 donors from outside of of the state.

If you were a real resident of Connecticut....you'd be asking some questions. Like, does Chris work for you, or for some out-of-state operation? He's your senator.....or he isn't.

This is my ongoing problem with 100 senators and 435 representatives.....they tend to think of themselves as national politicians and take money from various folks who have no connection to their home state. Chris is sitting there....with barely five people having any interest in his future within the state over the past 100 days. I'm thinking the future of Senator Chris Dodd.....in the next election....is pretty dismal.

At some point, the democratic party is going to waltz in....and announce the replacement character. Chris will act shocked, and probably go off to New York City for a week.....hanging out with his supporters there, and wonder where he went wrong. Maybe his kindly supporters in New York City.....will come up with a scheme for Chris to just jump states, and run there. Maybe.
at Saturday, April 18, 2009 No comments:

Earlier this week....there were hundreds of thousands of folks who came for their local tea party. I would say the conservatives have found a cause or effort that does have a pull and might last. What I noticed a day or two prior to it though...was this hint in the news of ACORN folks showing up and messing up the conservative effort. ACORN of course, for those of you from Bama who've never met them....are mostly big-town liberal community activists. Unless you lived in Birmingham or Mobile.....I have serious doubts that you'd ever run into any members.

I sat there and looked over this possible run-in between the tea party folks and the ACORN folks....and I had quiet the opposite view of most media folks or conservatives.

My humble opinion is that for every one hundred ACORN dudes who do show up and try to mess up this tea party business.....if the tea party guys are nice, polite and humble....they could actually recruit and get around fifteen to thirty ACORN members to join up as full-up tea party members, with only minimal effort.

Ever since ACORN came up as a topic in the spring of 2008....I've looked over their comments and recruiting. I've come to believe that a good portion of the crowd really have no great understanding of their organization, their situation in life, and mostly left to be dumb and ignorant. If you go and examine this principal of recruiting the lesser educated and the lesser knowledgeable....you end up with the NAZI formula of the 1920s....to draw big-time membership into the fold. The smarter the crowd....the more potential for them to ask questions....so you really don't want college-educated people in the mix.

So I see this meeting of the minds in a very different light. If you are a tea party player....and come up against a ACORN lady....first, offer some honest to God good tea. Smile. Say pleasant things. Do the eye contact thing. Take this whole discussion down to the basics. Don't toss in fancy words. Say things from the heart. Talk about the future, kids, and how America really isn't a mess but being led in the wrong direction. Talk about honest people paying honest taxes.

At some point, your ACORN friend is going to start asking more questions about this. Be honest and simple. By the end of the day....of those one hundred that came to mess up your day....may only go home with seventy folks. The positive thing? Next month when you have another tea party.....another one hundred will show up....and you'll recruit another thirty. Their size and proportions will diminish over the next year. ACORN leadership will meet in Hawaii....at some fancy four-star hotel and discuss how to get more members....and never grasp how they lost thousands.