How to Be a Loser Magazine 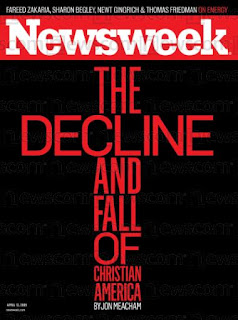 It would have been an article to pour over...."The End of Christian America."

The Wall Street boys kinda discovered that the real numbers of self-identified Christians have fallen 10 points since 1990.

Then they looked over at Newsweek. Their circulation has fallen since 2007 by 52 percent. Their statement? "It would be more plausible to state the End of Newsweek."

How do you lose 52 percent? I have to admit that I barely read Newsweek more than once or twice a year.....strictly when traveling. Most people I know....have dropped them over the past five years. Their articles are out of date, far off people's perceptions, and mostly anti-conservative.

My honest guess is that Newsweek will die out as a magazine by 2012. It'll stick around long enough to have impact in the November election that year....but it'll end shortly after that. You can't lose 52 percent of your base....and continue on.

Just a tip for the boys who write the articles for Newsweek....when you talk about the decline of something....you'd best find something more interesting to write on. The Wall Street boys already proved that the actual Christan numbers have increased (in terms of the millions), but the overall percentage is on a slight decline. This kind of statistic for Newsweek circulation would be terrific....but instead....its a 52 percent loss for you guys. That's pitiful.
at Tuesday, April 21, 2009 No comments:

A Left Turn at the Beauty Contest, Literally

Just a stupid piece of analysis from this Miss USA competition episode that I blogged about yesterday. So far, and I’ve read around a dozen articles on this….the only person that got this gay marriage question from gossip blogger Perez Hilton….was the California representative….Carrie Prejean. I found this strange, but then it kinda occurred to me that a lot of things are known about the participants before they arrive, and he likely knew precisely how she’d answer.

Maybe I’m wrong. But if not, and she was the only one stuck with the question….then Perez Hilton is a dimwit and strictly out to play an agenda. As a judge, this would have set him aside immediately….but apparently, no one cares. As for game next year? I’d like to see it held in Jackson, Mississippi…with a number of southern judges….and maybe we can repeat the questions but in the opposite direction. That would start to make these competitions real interesting
at Tuesday, April 21, 2009 No comments:

Interrogations and Torture, Round Two

The speech at the CIA by President Obama….came and went. It was a political rally type speech. These are a group of pretty smart guys who analyze….and I’m pretty sure they are sitting there now….analyzing the president and his agenda.

The key features of the agenda: admit a bunch of wrong things occurred in previous years over the interrogations, release what was very sensitive and classified data, and finally….turn the war on terror into a contingency operation without using the term “terrorists” as much as possible.

I don’t’ know these CIA folks but having worked in the military side of things….I can guess they are sitting there and wondering why the president cherry-picked his release of data and didn’t explain all the valuable stuff that was gained out of the interrogations. Naturally, this wasn’t in his plans because then it’d be admitting that valuable things do come out of interrogations (note, I didn’t say torture….because I still think it’s not a necessity).

So what happens now? I’m guessing that some analysts will sit back and start reading the New York Times for intelligence data….and just pass it along up the chain. Why analyze when you have leadership like this? I’m also guessing that no one will seriously interrogate any prisoner from this point on.

If the boss says we need valuable data….I’d probably offer the prisoner some decaf coffee and a donut….and I won’t go beyond that point.

If the boss says this is really important that we get important information from the guy….I’ll give the prisoner an easy-chair, a case of Dr Pepper, and some peanut butter cookies. I won’t dare go past the line of worrying about court action against me when the President tosses me under the bus. The worst punishment I might deal out is putting a poodle in the room with the guy and offer him a warm Pabst Blue Ribbon beer.

Today, I noticed that VP Cheney came out and asked for a full release of data collected by the interrogations. He thinks that you might as well tell the rest of the story. At the poker table….he’s just doubled the bet and pretty much put the current administration into a corner. News analysts will have to ask this stupid question now….what information did you gain? And the administration….in my humble opinion….will want to just skip over that question.
So, it’s just another day in America.
at Tuesday, April 21, 2009 No comments: