Swine Flu and a Bamaite

What should a Bamaite do in the midst of Swine Flu? This is a curious question. Since we are the likely ones to sit and ponder....lets not waste any time on this effort.

First, if you were a Baptist church goer....drop it. You should stay home and avoid crowds who might give you the flu. Watch Godzilla movies....bar-b-q....restore furniture....or maybe even do that oil change that you've been talking about with the tractor. It wouldn't hurt to read a paragraph from the Bible like every other week....just to stay tuned into the Baptist theme. Plus you can pretend not to drink.

Second....lay in a supply of Pabst Blue Ribbon beer.....at least twelve pallets. Tell the Sam's Club guy that things might get a bit serious and you want the pallets ASAP. Hide them under a tarp out back and ensure that few neighbors know about this.

Third....avoid relatives...especially the stupid ones or the ones in trouble with the law. This flu thing works out in your favor. You can even make up stories that you are sick when you aren't.

Fourth....get in a major supply of catfish, frozen ribs, and fried chicken. Expect to bar-b-q alot during this period.

Fifth....get in a supply of "Quarantine" signs. My suggestion is to use them on your neighbors....after the sun goes down. Put it up and then in the morning....see how they react. Act curious as you approach the sign and then keep asking how long they've been sick. When they deny they are sick....tell them that you heard that some medical folks from Auburn were around and think they quarantined a number of homes but you suspect its because they were identifying anti-Auburn football freaks. Then leave.

Sixth.....whenever around Democrats...tell them you heard over Fox News that Democrats are more likely than Republicans to get the flu...something about sanitary practices. When they ask which show....tell it was O'Reilly. That'll get them to pinging.

Seventh.....while it is customary to shake hands as a southerner.....this might cause you to get the flu passed onto you. Always carry a small can of diesel around with you to wash with. If you start to have skin rashes....switch over to WD-40 and just spray it on.

Eight.....don't pass around or drink from the same whiskey bottle with anyone else under any circumstances.

Ninth....even if that neighbor gal is giving 5-star indications that she is free from her boyfriend, wearing a tube top, sipping whiskey from the bottle, and rather lusty....it just might not be the right time to get friendly with folks. But get a raincheck and tell her that you might be free in a month or two.

Ten....lay in a supply of cheap books on WW II, old-fashioned farming, how-to-make-whiskey and septic tank repair. You might be spending a fair amount of time at home. 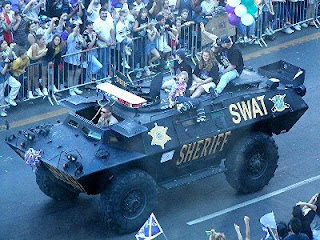 As most of you have come to know....I'm mostly against SWAT teams and the tank-mentality that most urban communities have drifted around to in the past three decades.

Cities like Atlanta, Chicago, Phoenix, Vegas, Seattle....have all climbed into a massive funding vehicle where SWAT means a significant amount of your funding. This includes state of the art technology and equipment. The fact that it might only get used three times a year at best....doesn't mean too much. Its a public sales pitch.

Various communities today....have a tank or armored vehicle. If you asked them to provide the instances of use over the past ten years....they'd all deny the request. If you went via the court system and finally got the full reports....you'd find a huge expenditure of public funds....for a "toy".

I'll cite of the best known....but also least known episodes of SWAT vehicles. Most papers didn't carry a single word about this in 2004. The press mostly passed the article. The papers in Arizona carried...around page two or three....but dropped the entire story after that point.

Around 23 July of 2004....26-year old Eric Kush failed to appear in Tempe traffic court. It was a misdemeanor episode.

It was decided after failing to show....that Eric was a "problem". So Sheriff Arpaio's SWAT team was rounded up.

The SWAT team shows up and proceeds to fire a smoke cartridge into Eric's house....its in the gated Fairway Hills community over Ahwatukee Foothills. I've been there....its typical middle class houses....golf courses.....simple life for the well to do.

One of the neighbors called 911....but the operator told them "don't worry"....its the cops conducting a mission.

About three minutes later....the neighbor noticed flames and then called 911 again. The house that they were messing with...and fired the cannisters into....was on fire. His house was just next door....so now, he was real worried.

The SWAT boys? Well....at this point....with their mighty SWAT tank in the driveway....they were worried about this black smoke coming out and that it might get damaged. So they moved it down the street a little. The problem was when they turned off the engine at this point.....the brakes failed and the vehicle rolled down over a 2001 Mitsubishi Mirage.

At some point in this mess....with Eric's girlfriend and kid out of the house.....with a full blaze going on.....the family dog tried to get out of the house but then got scared by the cops at the door....and went back in.....later dying in the fire.

When all of this ended....the $250k home had burnt to the ground, a dog was dead, and a car destroyed.

Eric? Well....he ended up posting a $1k bond the next day and walked out.

The public there got stuck with the bill for the mess....all because of the SWAT team and their inability to grasp reality.
at Thursday, April 30, 2009 No comments:

After weeks of thinking and pondering....which most Bama folks do greatly.....Karl came to a fascinating plan. It was brilliant.

Karl hired a stripper from Jersey City who had hypnotic powers. She was sent to Delaware and in a private stripper session with Senator Joe Biden....she convinced Joe that Arlen could be converted to the Democratic party.

For several years, Joe worked weekly and monthly on this idea of brining Arlen Specter over to the Democratic party. All the while....Karl sat in the shadows and knew what would eventually come. It was a strategy that even Clinton himself...would have wept over.

So as the values of Arlen Specer came down to a neat and round number of zero.....then the momentum kicked in. You see...here was a pretender Republican....with the only talent in life as a Scottish law expert....who usually contributed little to nothing to the Senate.

On the 100th day of the Obama presidency....the conversion occurred. Joe was happy. Obama was happy. The media was happy. The Republicans were happy. In fact....the happiest guy of all....was Karl Rove.

You see...here is a 79-year old guy with limited contributions....who can no longer be the Republican pretender. In fact, the Democrats are now stuck with some Scottish law expert.....who gives them little to no extra value. Oh, it is 60 to 40 for the vote....but face it....it was 60 to 40 a month ago....before Arlen made his announcement.

But now, we get an extra bit of entertainment. In today's news....did you note how Harkin from Iowa is upset that he's possibly been bumped on seniority now? Did you note that a couple of other guys just got bumped a notch as well? Did you a bit of infighting? Unhappy feelings? Yep.

Karl is sitting there now....mostly smiling. For the remaining eighteen months prior to the 2010 election...there a bunch of old Democratic Senators who are upset and mad over their position in life being diminished. The Democrats are stuck with some 79-year old guy who mostly recites Scottish law whenever the opporunity occurs. And somewhere in this entire mess....a bunch of folks up in Pennslyvania are waking up to this tune that a pretender Republican is now a Democrat....or maybe he's a pretender Democrat? Who can be sure of anything? Well.....Karl can.

So in the shadows of this whole mess....having years working the plan....Karl is smiling because the Democrats are stuck with this goofy character. And they really can't say much of anything.
at Thursday, April 30, 2009 No comments:

I sat and watched the Obama press conference on a clip....just to see if there was anything of substance. There wasn't. You didn't miss anything. There was no real dumping of information. In fact...about fifteen minutes into this....I was about to force myself into turning the damn thing off.

Of the whole episode....there was Jeff Zeleney of the New York Times. He probably asked one of the most stupid questions of the past thirty years at a Presidential news conference.

It was crap. It was stuff you'd expect on Oprah. It was something that you'd ask some beauty queen after a hair job. It was a crappy question that you'd pose to Sharon Stone after making a new movie.

Enchanted? I'm trying to remember the last time any idiot asked me a question using the word enchanted. I would have stood there for 30 seconds...eyeballing them carefully....then asking if they ever ate any enchanted catfish with enchanted hushpuppies, with an enchanted ice tea and three enchanted half-lemons tossed on top? I would said that I felt enchanted each time I went to a successful bathroom release. I would responded that my enchantment was maxing at 90 percent whenever lightning was in the local area. I kinda feel enchanted when snow falls....but I'm guessing that's not the kind of enchantment that you'd like for me to brag about. Oh, and I get real enchanted when tube-topped women start stooping over....but I don't think you want to hear about that.

So, in the measurement of thing....trying to conceive this vision of Andrew Jackson standing there and responding to some reporter asking about his enchantment....he would taken his walking stick and whacked the New York Times reporter three or four times before settling down. Truman would have gazed at the guy for 30 seconds and then asked if the guy named a sip of water or something.

So I'm finished blasting away on enchantment. And if anyone really needs to know about my enchantment feelings....I'd suggest you think long and hard about what you are asking for.
at Thursday, April 30, 2009 No comments: