There is a wonderful story of compassion, wisdom, and old-fashioned common sense today...within Fox News. I realize that some of you far-left liberal types who read my blog....don't go near Fox...therefore, I will tell the wonderful story...here and now.

Once upon a time....in a faraway land...was a man by the name Chen (we will excuse the last name....for it really doesn't matter). Chen was a man of vision, capitalism, and rash judgments....I can say this, he can't.

Chen had built up a construction deal...which ultimately failed...to the tune of $290k. It was a serious error in judgment. He was now in serious debt...which in China...means no real relief.

So Chen walked up to a bridge in southern China, and for hours contemplated suicide. The cops came. The emergency folks came. Minute by minute...the episode went on. Nothing really was happening. Several hours pass.

Then...a 66-year old guy by the name of Lai....kinda walked up...eyeballed the situation...then proceeded onto Chen...standing there at the edge.

Lai was a man of vision, common sense, and practical life experience. Lai walked up and shook hands with Chen.

Then, Lai...extended his palms quickly and pushed Chen off the bridge.

To be honest, Chen only fell 26 feet...and then into a partially inflated emergency air cushion that the cops laid out. He's injured to some degree...mostly because the air cushion was fully inflated.

There stood Lai on top of the bridge and those standing nearby were witnesses to his comments afterwards. Lai was fed up with Chen's "selfish activity" (the comment that China's newspaper Xinhua wrote).

To be honest...traffic had been tied up for several hours and everyone was just standing there and waiting. Straight from Xinhua:

"I pushed him off because jumpers like Chen are very selfish. Their action violates a lot of public interest," Lai was quoted as saying by Xinhua. "They do not really dare to kill themselves. Instead, they just want to raise the relevant government authorities' attention to their appeals."

After the entire event....the cops decided that Lai was a slight problem and took him off to the local police station for questioning. I'm guessing that they aren't happy over his push and want to make sure he doesn't go around pushing more of these guys off bridges.

I sat there...pondering Lai and his wisdom. Most folks who want to committ suicide....quietly go and just do it. This week, we had the wonderfully talented and young British actress......Lucy Gordon, who committed suicide in Paris. She had problems over a close friend who committed suicide recently, and just quietly did it one night. Over in South Korea, the former President there committed suicide quietly on a walking trail yesterday.

Typically, people who want to commit suicide....don't do it as a show. They don't stage 4-hour traffic halts on major streets in China or Paris or Bombay. Lai is kinda right....a show episode becomes a selfish act.

So somewhere out there in China....there is a 66-year old guy who is a major threat to every single selfish suicide player. Lai actually intends to make you play out your game....as quickly as possible, without any real delay. Lai's compassion has come and gone. He's living on reality.
at Saturday, May 23, 2009 1 comment:

When No One Cares

I work for the US government via a contract...the company involved doesn't need to be mentioned. Every five years, they put the contract up and have bid's on the cost. When I went through this bid process as a player in 1999 and 2004...there was lots of anticipation by the employees and high-level interest. After 2004's deal, the big-name company got dumped and we were all offered jobs with a slightly lesser company. Naturally, lesser pay and benefits fall into play here. Most left....some stayed....and of course, I stayed.

Since 2004, my company has become the "monkey-boy". The original company got bought out. Then the big-name company we fell under....shoved us under some minor-league group run by a bunch of former Army-commanders.

I could write an entire book on the dismal management and games they've played. No one who works for them....takes them serious. Since the dumping of the federal holidays and giving us five extra leave days back in January.....the management folks don't come around much. We have no respect for them and typically just take the entire game as a joke now. Needless to say.....it's hurting the government in several ways. No one is loyal....thus everyone has resumes out and walks out whenever they find another job. Turn-over....is significant....compared to most companies.

The competition has been going on for six months, and next week....it will finally come to an end with the winner of the next five years being announced.

Frankly, compared to the past two competitions....NO ONE CARES.

I sat there this week....looking around. There is no care whatsoever over this competition. If our company wins or loses....it doesn't matter. Its the total opposite of the last episode.

Almost every single individual that I work with....has resumes out....and are actively seeking employment elsewhere. The negativity is joked about daily. The government has gotten to the point of thinking about moving contractor positions over to GS positions...just to get out of this morale slump.

So come next week....when they finally announce the winner. I'll likely pull out some miniature bottles of booze and celebrate in some fashion....and then keep putting resumes out. The winner? They will be the loser in the end. By the time, they cut pay or benefits......you end up with a loser of a deal.
at Saturday, May 23, 2009 No comments: 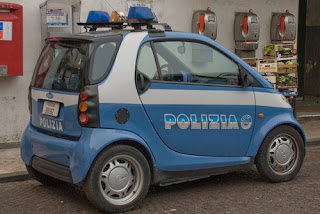 A moment of pondering.

So the new government standard for gas mileage will end up being 35.5. How exactly do you reach that point, if you are Ford, GM or Chrysler?

Typically, you start with the frame, and you start to carve three to five percent of the steel frame out of the car. You try to pump up the engine but customers hate under-powered cars, so you try to stay within the norm of 2.5 or better for real cars.

The problem is....you are now less safe than you were yesterday. In fact, there just might be a market for those 1974 Ford LTD's now.

So on your headstone....as you lay there wondering how you got whacked and put six feet under....you might think about this "death by 35.5", and then wonder why steel matters more than oil.
at Saturday, May 23, 2009 No comments:

The Sun Will Finally Set

Once, there was a mighty hurricane. It came and passed. In fact....four long years have now passed.

This week...some folks in New Orleans....who consider themselves in a temporary situation and living in temporary housing, under temporary government funding....were kinda told that the "temporaryness" of this situation is just about finished.

FEMA spoke on Friday and says that the government is finished being temporary custodian of these folks. They will start evicting Katrina survivors in July. The guy was kinda nice about it.....admitting that it might take a while, which means weeks and probably months before they can get court papers done to individually kick out each single resident in a case like this.

This was a $5.6 billion housing assistance program. Either you got a trailer or a hotel room. The program was supposed to end two years ago, but a bunch of Democrats got involved in the process and pumped more funding into the project.

I was kinda surprised about the numbers. At one point...which was the pinnacle of this entire episode....143,000 households were in existence with the temporary situation.

The curious thing is that both parties now agree that they just can't keep pumping money into this deal. I have written probably a dozen blogs on Katrina and all the things that happen before and after.

In real life....after a huge episode like this....people move on. Folks in Mobile and South Carolina have done this several times. Folks in Florida have the act memorized. New Orleans is the only place where hell just keeps going on....week after week...month after month....year after year...eternally.

Its funny in a way. Prior to the 1990s, other than the quick emergency response and some infrastructure funding afterwards...we didn't pump any extra money into a community. If you go back to the 1800s, nothing happened unless you saved yourself. The billions involved in New Orleans? All of your tax money. Don't worry...if they didn't spend there then they would have spent it on study butterflys or developing analysis over Thai bar gals. Just another day in America.
at Saturday, May 23, 2009 No comments:

Liberty and the Democrats

There is an amusing story out from yesterday...concerning Liberty University...the private and highly Christian university up in Lynchburg which the Rev Jerry Falwell created. Like most colleges, they allow clubs on the "installation" (pardon my military jargon). This week, they decided that allowing the College Democrats club to exist...was a bad thing. They even came out and suggested that the club's primary function stood up against the Christian school's moral principles.

This club has barely existed eight months...and really only popped up during the Obama campaign. They admit they only have about thirty people and the club says its in the "growing" stage right now.

Right now, they can't meet on campus or use the Liberty name in anything they do. I'm guessing that some local Democrat will arrange for a meeting place and the club will continue on.

I realize it may be shocking in this case...but I'm taking the side of the Democrat club. There are Democrats who are active members in the Baptist church, the Methodist church, and various denominations. To stand here and deny the club existence on campus means very little. They will continue to exist and likely grow in the future.

To be kinda honest....if we killed off every Democrat in America tomorrow...then what? You'd merely have half of the Republican party split off as liberal Republicans and the other half as conservative Republicans. We would eventually recreate the entire Democrat party within a decade. You need a two-sided argument to some degree...to exist as a republic, otherwise...it starts to turn into something that we really don't need.

So Liberty had their moment of glory...and in the weeks to come...they probably will notice that the club still exists and now has stronger membership because of the disapproval they stuck upon them. I'm thinking Liberty needs to do something drastic now...like create a NCAA football team or something...to get the topic of discussion going in another direction.
at Saturday, May 23, 2009 No comments: