The Evil Nuclear Door is Open, for All 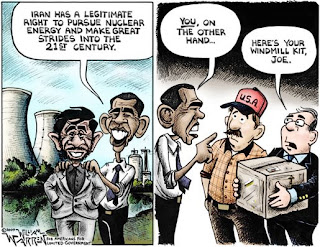 I commented on this a day ago....and here is the cartoon today which spells the same Obama dilemma. You can't give a green light to Iran, and then tell the American consumer that nuclear energy is evil.

If you had to pick a stupid statement and way to let Iran off the hook....this was a five-star effort. How can you defend the anti-nuclear crowd now?

There is an excellent article over at The New Scientist....concerning the decline and disappearance of the Mayan empire.

I've been a big Mayan, Inca, and Aztec enthusiast for many years. If I could have picked a good science background back in 1977 and gone off into a different direction....it would have been in that direction.

This article gave a fairly short summary over the decline of real wood there in the Mayan empire.

Researchers led by David Lentz, a palaeoethnobotanist at the University of Cincinnati in Ohio, sampled wooden beams and lintels from all six major temples and two palaces within the ancient city of Tikal. The first three temples, built before AD 741, used only large, straight logs of the sapodilla tree - a particularly strong wood that is nevertheless easy to carve with ceremonial inscriptions.

But after that date, large sapodilla logs were almost entirely replaced in temple construction by logwood, a smaller, gnarly tree that is almost impossible to carve. "It's definitely an inferior material," says Lentz, who reasons that the temple-builders would only have accepted logwood if they had run out of suitable sapodilla trees to harvest.

So the guys simply ran through their best wood within the region....and then then accepted things as they were. Unlike the Romans or the Egyptians who sat there and figured ways to transport big heavy objects a long distance....they accepted their situation.

What they ended up doing was cutting down just about all of the best trees, then they went after the lesser trees....and then they finally started accepting the worst trees.

While all of these was going on.....I'm guessing that folks looked around and realized living in Mayanville....was going to be an issue. No trees, bad erosion, and mismanagement. So local folks probably started packing up and moving twenty miles out, forty miles out, and eventually a hundred miles out. The empire spread.....but the "heartland" of the Mayans was becoming Detroit.

So eventually, the leadership of the Mayans woke up and looked around. There were alot less people, almost no trees, and a "dead-zone" around them. The culture came to an end....without any media guys to publish it or great thinkers like Plato to analyze it. Kinda like Detroit, folks who were hardcore Mayan probably stayed on...thinking that they had something.

The folks who were smart....left Mayan-ville (or Detroit).....and setttled on a better dream. They didn't brag about things at the new location. So the history of the Mayans kinda died out....which might be the end story of Detroit too....if we watch long enough.
at Thursday, June 04, 2009 No comments:

The Washington Times had an interesting story today:

Americans pining for a peaceful existence might consider moving to New Zealand, the most peaceful nation on Earth, according to the 2009 Global Peace Index released Tuesday by an Australian-based research group that counts former President Jimmy Carter, Ted Turner and the Dalai Lama among its endorsers.

The U.S. is 83rd on the roster, according to the Institute for Economics and Peace that rated the relative tranquility of 144 nations according to 23 "indicators" - including gun sales, the number of homicides, the size of the military, the potential for terrorism and the number of people in jail.

The index defined peace as "the absence of violence," and so far, things are a little dicey. Violence and instability have increased, respect for human rights has decreased. The researchers also calculated that the world's nations have collectively lost close to $8 trillion due to the complications of widespread violence.

I read this twice over...to make sure I understood the implications completely. Some guy created a "global peace index", and then gathered a bunch of statistics that pleased him. Then he cherry-picked what he liked and arranged the order to make news. So the US.....is regarded as number 83 of 144 nations in terms of being peaceful. New Zealand is regarded as number one.

The key factor...."the absence of violence". The amusing thing in this quest for absence of violence...is that you have 50 states that make up America. Naturally.....Alabama gets tossed into this fifty state deal and doesn't have a chance to compete against New Zealand on its own.

In places like Red Bay, Oak Grove, River Falls, and Sweet Water, Alabama....there is absolute lack of violence. Most folks would invite you up on the porch to sip some ice tea in the summer or have a fresh slice of apple pie. In the fall, they'd serve you a cup of coffee while chatting over Saturday's results of NCAA football and why Auburn lost yet again. I would admit that Birmingham has issues after dark....but beyond that....Bama is pretty much a place without any real violence.

The problem with this index game and cherry-picking data....is that you get to toss in New Jersey, Miami, LA, Vegas, downtown Chicago, and the border towns of Arizona into this mess. We get to number 83 easily with this cherry-picking group. The amusing part about this effort...is the folks who endorse the index.....ex-President Jimmy Carter. You would think that he'd be smart enough to realize the lack of reality with this kind of index....but then Jimmy....is Jimmy.

So I'd like to invite the index crowd to do something extra special for 2010. Lets split the US into fifty different groups and let us individually compete against Honduras, Belgium, Tonga, and New Zealand. I'm thinking Bama just might end up in the top ten....which we can celebrate by sipping some tea on the front porch.
at Thursday, June 04, 2009 No comments:

It was a comical suggestion but apparently, the White House is seriously considering it.....taking foreclosed homes from banks....during the hurricane season....and letting displaced people live in them for weeks, months, etc.

The banks haven't said a word yet....which means that it was pretty much a shocker for them that this would be suggested.

So the scenario is....you live in Mobile....and the hurricane hits squarely on the bay. You had a house....seriously damaged. You come to the FEMA dude....and he says to be at this address tomorrow....about sixty miles away....and you get the keys to a house for a period of time. You show up....move into this nifty house....come to like it a bit, and extend out your stay. Eventually, both FEMA and the bank will be trying to get you to move....but this could take months.

I would imagine that banks are a bit puzzled by the deal. They have a empty house worth $150k or $250k.....and the government says that they will pay a rental payment (fair amount)....during this crisis period. My guess is 90 days minimum and maybe six months maximum.

This is going way beyond what the government ever signed up to do. Before the 1960s.....other than plain-vanilla emergency services....there was nothing else that the federal government ever did in a hurricane. Today, there are billions spent on every hurricane. Every penny spent....is additional tax revenue that must be acquired by the government.

My suggestion is that the moment you see a hurricane surfacing up around the far Atlantic....hustle down to the proposed affected region, and rent some shack from some guy. Once the shack falls over...hustle over to the FEMA dude and ask for a foreclosed place in a nice neighborhood.....and then try to extend this out for months....maybe even years....as a free residence.
at Thursday, June 04, 2009 1 comment: