When You Know a Magazine has Died 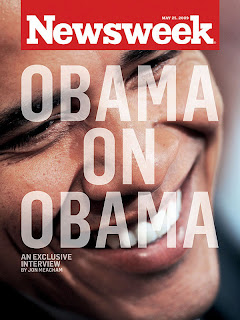 I had this idea. With Newsweek being a failure in terms of business and subscriptions....and at least 16 covers dedicated to President and Candidate Obama over the past eighteen months....why not change the name of the magazine to ObamaWeek?

I realize that the Newsweek crowd will think I'm joking. I'm not.

The headlines on the cover? Most analysts laugh over the topics and the top subject chosen for each issue. This week's topic? Obama on Obama. Would Bush on Bush have ever sold on Newsweek? Would Reagan on Reagan? For some reason, I see a cheerleader magazine at best.
at Saturday, June 06, 2009 No comments:

On the Trail for a Job 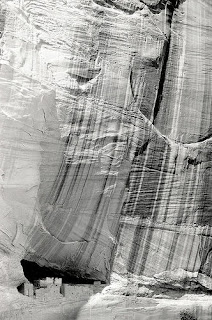 As most of you know, I am on a quest to get another job by the end of this year. My primary direction in this quest? Yes, I'm finally leaving Germany, and yes, I'm aiming for a GS job with the government. I've likely put out 50 resumes via various government jobs.

This past week, a job from April came back and via the email I opened, I discovered that while I was qualified for the Facility Manager's job in a remote national park in Arizona.....I wasn't to be amongst the next group who might be called for an interview. It wasn't the first such email. I have gotten five or six like this in the past sixty days. This was sent out around 2:50PM in the afternoon.

It was a curious thing....three hours pass. Another email from the same office suddenly pops up....I am now pronounced qualified and could possibly get a interview (it's not guaranteed but at least I'm in the second bucket now). I sat there pondering this. An accident on the first email? Or did they go back and see a weak field and look back at the ones that they'd tossed out on the original selection group? I'm curious.

I went back and reviewed the job....and I actually see my background fitting this more than ever. I'm not National Park Service material....I spent over 22 years in the Air Force, and the past ten as a contractor supporting the Air Force. But they might need something different....and maybe I'll get that chance for a interview.

Needless to say, there is a feeling expressed in the internet, via news items and discussions....that the Indian tribe would like to kick out the National Park Service. I must have spent 90 minutes yesterday reading the discussions, the logic and the reasons for this issue.

This is a tribe who've had various up's and down's with the US government....mostly down's. If all the money that the government had promised....had actually come in....then everyone on the reservation would be driving a Cadillac. They aren't.

The park is situated in a location that is not a huge tourist area. The folks who come....come because it was on their agenda and they wanted to view the monument. So a vast amount of tourist dollars isn't surging through this region or the park area.

A few of the Indian elders want this to be less of a tourist thing with old tribal traditions....and they want control of the entire operation to ensure that. Then a few of the tribal members want the government out so they can cut out the middle man in this entire operation....running it their way.

Naturally, a few folks have other agendas which have nothing to do with the tribe or the park....so this starts to become more of a poker game with only one winner at the end (it won't be the tribe, bet on that).

The National Park Service? Well...they typically bring along professionals and try to run a first class operation. Their relationship-building skills with Indian tribes? It's probably tested on a daily basis. They typically know how to run efficient and safe operations. Based on the dozen national parks I've been to....the Park Service crowd wants a successful operation.

In this case, I've come to a conclusion over simple facts. Whatever relationship exists between the National Park Service and this tribe.....isn't enough. The tribe needs this park to succeed way beyond the current picture. The poverty level demands more jobs and more revenue. The Park Service is probably aiming at a vision which is half of what the locals really want. To be honest, there needs to be a publicity campaign beyond what exists now.

The tribe needs a symbol and a campaign to get people to find them on a map, and actually stop for two days....and spend an extra $200 each....whether for a hotel, a meal or a tour of a natural site. They need foreign visitors who will go back and show pictures, and get others to come to America in search of this park.

What the Park Service offers....is management skills. And I think in the end....the tribe probably needs folks with such skills, who are honest and respectful of the tribe, its traditions, and its ambitions....and then to work toward a common goal. Lets face it....if you were in poverty and wanted a simple exit....then this park might be the key. But you have to market it....to make it work.

So next week, I'll sit by the phone as I come home and wait in hopes of a call for a interview. The delightful thing about this...if it were to occur? I get to wear a uniform again. Man, o man.....that has been my dream since 1999 and retiring from the Air Force. Yeah, well....sure. At least it's a green uniform. And there is that Smokey the Bear hat to go with it.
at Saturday, June 06, 2009 No comments:

Waiting, on the 6th of June 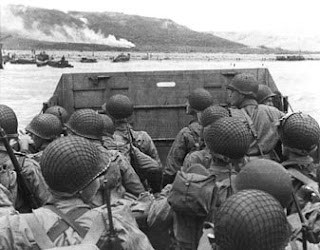 We waited an eternity.

We waited as the water tossed the boat in the sea.

We waited and thought of Yankee Stadium, Ebbets Field, and sandlots where baseball was a common denominator.

We waited and could smell fresh baked apple pie from Grandma's kitchen.

We waited and thought we could hear jazz music in the far distance.

We waited and rubbed our lips where our girl Sal gave us that last kiss before we left.

We waited and tied our boots for the forty-fourth time since entering the boat.

We waited and openly wept over our fear of what was to come.

We waited and smoked a fine cigarette that might have been our last.

We waited and sipped from the canteen...that cool refreshing water that made a dry throat go away.

We waited and thought about all the things we'd never done yet, and whether we'd ever get a chance to do them.

We waited and thought about the new model of Chevy that we'd just heard about in a letter from home.

We waited and thought about fried chicken on a hot summer afternoon in Gadsen, Alabama.

We waited and thought about ice cream and how it chilled you on hot days in Charleston.

We waited and thought about the teacher that always said we'd be a loser in life.

We waited and thought about wives who were waiting a thousand miles away for our safe return.

We waited and thought about the smell of spring.

We waited for that momentous moment, when you knew they'd let the front door down and you'd have to leave the boat for a place you really didn't want to go.

We waited for Sarge to say "move on".

We waited for an eternity to pass.

We waited until we had no more patience to wait.....then we left the boat.

Waiting is a painful process, with no relief.

Waiting is a moment of time, where you know little about the outcome....but that it simply has to be.