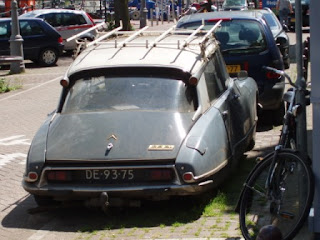 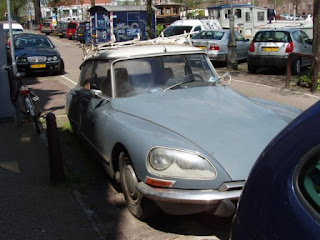 There is rarely anything French that I really care for, except French Fries. However, for a brief period of twenty-odd years, the Citroen folks made the DS. It was supposed to be an executive car, but lots of people came to have a passion for the auto.

While walking the streets of Amsterdam, I came across such a classic on the streets.

The DS had an usual shape to it, but what really made it different....was a self-leveling design. You could flip a lever, and pump up the front shocks....thus getting a bit more protection on a bumpy road. You could raise the rear and have an aero-dynamic look.

I rode in one a couple of times in 1978....and came to enjoy the ride. It felt like a million-dollar suspension system. The problem though was that the pump that kept things pumped up on the rear or front....had leaks. So there was a continual hydraulic fluid episode to fix. It wasn't my car, so I didn't really care.

I stood there for a minute or two admiring this beauty in Amsterdam. It was a classic.
at Saturday, June 13, 2009 No comments: 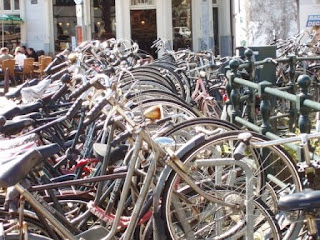 There is a bike for every single human in Amsterdam, and like another 100,000 for visitors who come to the city.

You could bike from one side of town to the other side in thirty minutes.....all on a bike.

There are one-lane bike-streets....bike stop lights....and even bike parking lots on every street corner.

I sat at one cafe with a huge traffic circle, which both cars and bike shared. I kept waiting for an accident to occur.....because of the enormous amount of traffic going on. For forty minutes I waited.....and nothing happened. At least a thousand bikes passed in that time period on the traffic circle.

I stopped at a bike store to gaze upon these "beasts". These weren't the cheapo variety you'd find at Wal-Mart. You were going to have to spend $500 to get a good decent one, and on up to $1200 for a pretty nice one.

There in Leiden where I stayed....the town has a pretty big train station. Out front, I noticed this barely slanted tunnel which led down about two hundred feet under the station. It was a bike-parking lot. I actually walked down into the tunnel. There must have been 5,000 bikes parked in various stalls. I'm guessing everyone who lives in Leiden but works in Amsterdam....ends up riding the bike over to the train station and then riding the train up.

Of course....gazing at all of this....only because I'm a practical guy...I came to realize there are no hills here.....so this whole bike thing might be easier than one thinks. In Bama, it'd be awful hard to convince one of us that biking to this extent would work....especially if you mention hill-country.
at Saturday, June 13, 2009 No comments:

Email ThisBlogThis!Share to TwitterShare to FacebookShare to Pinterest
Labels: amsterdam

A Moment in Amsterdam 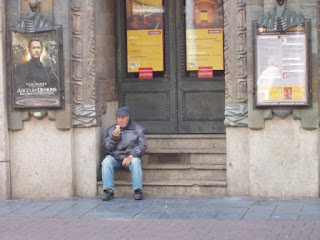 I am a simple country boy from Bama, who has walked a distance and admires most all that I have seen. But on some dark moments, my admiration is less than desired.

Years and years ago.....stationed near Frankfurt, I came to be downtown one day and witnessed some nutty German gal who sat at a bar....talking to herself, gigging constantly whilst looking at herself in the bar mirror. I asked a guy who I standing next to....what was her issue? She was mid-twenties and fairly attractive. His response...she was doped up....but on heroin.

I came to realize over the years, that there are different cases of "doped-up"....from weed, to crack, to meth, and then to heroin.

It's hard to find a region that has a serious heroin situation. It's not a typical drug on the streets of Germany. In the US.....you might find it in major cities like LA or New York, but it'd practically impossible to find in Bama.

So there I sat, in a restaurant in Amsterdam this past week....and about two minutes after sitting at this establishment....I came to realize the gal sitting in the next booth....less than four feet from me....was on a heroin high.

It's June and a typical summer day....she's dressed in a fall jacket, with a sweater under that. No ear piece or cellphone in her ear.....but giggling constantly and looking at the mirror on the restaurant wall. If you walk around Amsterdam, you'll see a few folks in full winter gear....in the midst of June.

Amsterdam has a fair number of heroin junkies. If you wanted a dose...it'd likely take you five minutes to arrange for a delivery. It's a drug that you'd rather not get addicted to.

Up until the 1990s, you could be addicted to heroin and maybe live another thirty years. But since you tend to have friends who do the same drug....share needles, then you tend to get hepatitis more frequently, and very likely AIDS.

I ended up sitting there for another 30 minutes before she finished, paid, and left. In some ways, I felt sorry for her. But in a city like this....there a couple of thousand heroin junkies, and you simply waste compassion when thinking about the sad picture in front of you.

There are a thousand great things to say about Amsterdam....but there a few negative things too.
at Saturday, June 13, 2009 No comments:

Email ThisBlogThis!Share to TwitterShare to FacebookShare to Pinterest
Labels: amsterdam

On a Leiden Wall 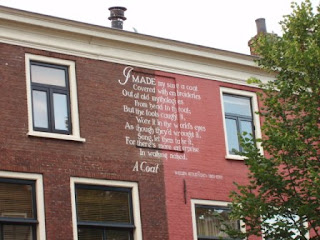 Out in Leiden, Netherlands, there is this wall which has a great quote by William Butler Yeats. It's rare that someone writes something on a wall....typically its graffiti and worthless. I stood there for a good three minutes and read it a couple of times. It was worth remembering.

I made my song a coat
Covered with embroideries
Out of old mythologies
From heel to throat;
But then fools caught it,
Wore it in the world's eyes
As though they'd wrought it.
Song, let them take it,
For there's more enterprise
In walking naked.
at Saturday, June 13, 2009 No comments:

Email ThisBlogThis!Share to TwitterShare to FacebookShare to Pinterest
Labels: leiden 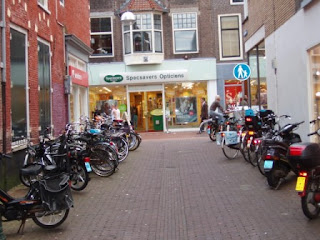 I wrapped up a three-day trip to Amsterdam today...my fourth trip in my life to the area.

I am amused by Amsterdam. It's one of those places that I could visit for weeks....but never bring myself to permanently live there. It's not cheap and it's a bit different than anyplace else I've ever been.

I prefer to stay in Leiden....a town of one and only one industry....college. If you've never been to the town.....you simply sit there in amazement over the structure and "bike-ability" of the town. It's supposed to be around 120,000 residents, but I'd guess that 40,000 of that group are college students.

Unlike Auburn or Bama.....where drinking and partying is one of the top enjoyments of college.....they tend to actually study in Leiden, and drinking might be a number three priority for most of these guys.

If you notice the bikes in the picture...I would imagine that every single person in town.....has a minimum of one bike, and there must be 8,000 scooters in the town.

I stay in Leiden because it has the Holiday Inn which has a terrific rate for military folks, a great four-star breakfast (it's not cheap at $22), free shuttle service to the train station, and a 30-minute train ride to Amsterdam. You avoid the hassle of driving into the big city.....by staying way outside of Amsterdam.

I knew I was in the right place as I entered the Holiday Inn room on the first night, turned on the TV, and here was the "A-Team" in English. I sat for ten minutes watching a classic and felt right at home.

For those who haven't been there.....everybody in the Netherlands speaks English. Behind the English, if looking a society with a sense of humor....then Netherlands is right at the top. It's an engineering type society....where everything built....whether a bridge or road or town or building.....has creativity built into it.

There are a couple of blogs that I will write over the next week on Amsterdam and the Dutch.
at Saturday, June 13, 2009 No comments: