Czar Me A River 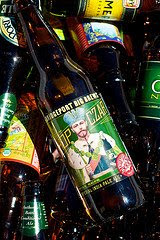 I saw a neat list (I like lists).....of all the Czars in America. Naturally, we aren't talking about royal Czars....but government Czars.

There are a couple of amusing bits around these Czars. For example....most people agree that Paul Volcker isn't being utilized for anything important and basically just shows up when the president has questions. He looks good in a suit and has a degree via Harvard (thats where all the Wall Street idiots came from who triggered our spiral today). I think the president mostly keeps Paul Volcker on the payroll because no one else would hire him today at the rate he thinks he deserves.

Richard Holbrooke is really doing the job that a junior associate would do in the state department but then they would report to Hillary, and the President doesn't want her handling "big-jobs".

I sat and looked over the list and I have some potential future Czar jobs that I'd like to suggest:


No, I don't take any of this serious....thats the sad part of this blog. After a while, you begin to realize that you have a bunch of guys to blame problems onto when your policy doesn't work. So you bring in a new Czar and pretend its a new start. It's bogus management. It's how GM ran its operation into the ground.
at Sunday, June 21, 2009 No comments: