"All You Need to Know" Moment 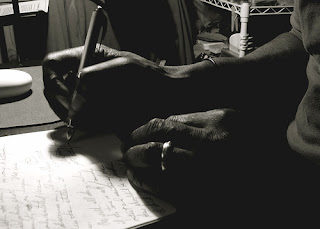 This week was a fairly slow week in the office. At some point, I had three people come up and ask how to perform a warranty action. After the third person....I decided enough was enough....so I would write one of my famous “all you need to know” papers.

So I pondered for an hour, spent thirty minutes writing this full page of explanation on warranty work, and then hit “send”. Within an hour....about fifteen people had gotten a copy, and it’ll probably continue to flow to another fifteen people next week.

My associate in the next room came over an hour later....after reading this....and then commented. He wanted to let me know that he enjoyed reading what I write because I get to the point and bottom line very easily. For him, it doesn’t matter what I write....it’s always entertaining and insightful. To be honest....he doesn't know I blog....and he's missed out on 3,200 blogs.

For years, I sat and admired Paul Harvey and his stories. I asked myself about ten years ago what made the Harvey stories so readable. And I came to three basic conclusions.

You have to write at a simplistic level. A 12-page story is usually too much for a typical guy to read....so if you can tell an entire story in three minutes or less...then people tend to grasp the whole situation. It’s that way with projects, problems, woes and current events. Get to the meat of the story and let the story tell itself.

Second, there is always a bottom line or lesson learned. No matter what the topic is...whether a coup in Honduras or Wall Street sinking or bad food at some restaurant...there is a bottom line.

Finally, it helps to entertain people along the way. A great story on corruption....always has an amusing slant to entertain those reading it. The same goes accidents and events in the world.

It doesn’t matter if I write in the office or for blogging sake....I write the same way all the time now.

For a kid from a rurals of Bama to have traveled as much as I have....I really haven’t seen enough to change my vision of the world. I still wear the Bama glasses and see things in a Bama prospective. And I suppose that I write in a Bama style as well. The strange thing is that it seems to work.
at Sunday, July 12, 2009 No comments:

Death of the Hippie Age 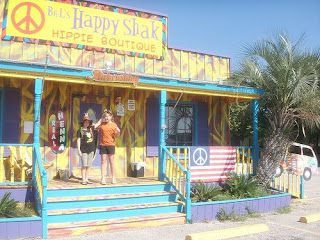 For those from Bama....we need to define hippie because the meaning has become lost over the past ten years. If you were a hippie....you were a dude or gal opposed many conventional standards, customs of society, and wisdom. You tended to be "radical"....wanting extreme liberalism. Your chief goal at the end of every discussion tended to be the legal growth of mary-j-u-wanna. You wanted a free and open attitude and lifestyle. Taxes weren't necessary. Government welfare wasn't necessary. You lived off what you had and were satisfied with marginal income in life. You were a nomad, with no ambition to ever be permanent.

As you look across the spectrum....the hippie age is drawing to an end. Environmentalists are replacing them....and thus the "to each, his own" agenda is going to die out within the next two decades. We are looking at the end of an era.

Yes, there will be hippie-wannabes in every community. They will wear weird color T-shirts and openly discuss how they smoke a bit of weed every evening. They will tell you liberal thoughts and share gardening tips with you. But you might notice that the house they live in....makes them a wee bit different.

Email ThisBlogThis!Share to TwitterShare to FacebookShare to Pinterest
Labels: death of the hippie age

If You Were Smart

Frank Ricci is a fireman.

For the benefit of you folks in Ripley....I'll explain the emphasis of this story.

Frank had taken a test with the rest of the crew up in Connecticut to get promoted. The management decided that the minority scores were so low...that they couldn't go by the results...so they tossed the test results out. Frank sued in court...and the case went all the way up to the point where NY judge Sonia Sotomayor (yep, the supreme court nominee) was involved. She wrote a fairly tough opinion against Frank and the guys. It was rigged in some fashion to simply stop and terminate there...except some folks happened upon it at the right time...and it got forwarded up to the US Supreme Court. They read....and decided that Sonia was totally wrong in this case...and announced a win for Frank. They have to abide by the test results.

The slam on Sonia is fairly significant. It was a professional lecture of sorts. Things like this happen all the time. Judges make mistakes. Judges decide to reverse situations because the law simply isn't right. There are various reasons that things like this can occur.

So an interesting thing happens now. The Republicans want to invite New Haven firefighter Frank Ricci to the Sonia discussions in DC. He's to be a witness. I question the need for this. Frank might have three minutes of worthily comments to make...and thats basically the end of his episode.

For some reason, a group who heavily supports Sonia...has decided that Frank is the enemy. These guys are urging the press to probe Frank (not like the aliens) and tell the "troubled" side of Frank. I'm guessing several Democratic senators are preparing to grill Frank to a fair extent.

I will offer this simplistic advice...avoid Frank and criticism at all cost.

You see...Frank's a firefighter....and once you set onto this guy...all firefighters, and almost all cops...start to close ranks around Frank. They tend to all believe that Frank's case was right. Another problem is that half the papers in NY City will side will side with Frank...to protect him. Half the voters in NY and the surrounding states will likely side with Frank.

The worst scenario here is that Democrats create a unnecessary wave and then go into an election year...like 2010...and find that they lost a huge momentum in NY state and the surrounding region. They also lose on cop and firemen support, which used to bend a fair degree to the Democratic party.

For you guys from Time and Newsweek...who are working overtime this weekend...to tell the Frank story...you might find even fewer readers in the future if you decided to blast Frank in some manner.

Lets be realistic...Frank has three minutes of something to say. Let the guy say it and then move on. If anything else occurs...whether a media blast or a senator blast....you lose something that you will not regain in 2010. I would be thinking long and hard over my actions. My two cents.
at Sunday, July 12, 2009 No comments: