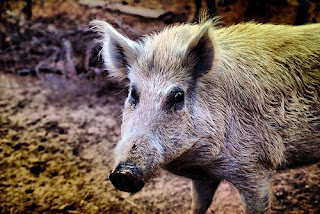 Just two cents of analysis...the Ag department came out today...after Drudge knocked them down on government waste in buying pork (ham), and said the contract in question purchased 760,000 pounds of ham for $1.191 million, at a cost of approximately $1.50 per pound. They were quiet proud of this and wanted Drudge to know that.

The only problem with this....is that Food Lion is selling ham by the pound...at 79 cents and I saw one price with Piggly Wiggly for ham around 82 cents.

The amusing thing...was that stimulus funds were used for this $1.50 a pound purchase. Even in Bama, you can find a better hog deal than this. If you read the contract....the government only got two offers? Two freaking offers on a contract? What am I missing here? There should have been forty or fifty. So this company that won....did they bid on last year's election results as well?

For a while, I was allowing illogical thoughts to overcome my way of thinking. These hogs? They are likely special hogs....from New York....fed beer daily....allowed to watch NCAA football on Saturdays....given Brazilian peanuts as snacks....and allowed to listen to classical music in the evening hours as they lounge. Heck, maybe we got a swell deal at $1.50 a pound in this case.
at Monday, July 20, 2009 No comments:

The Term is "Borrow"

About once every other week....my brother, the engineer, will tear loose from analyzing technical things, and give you a five-star analysis of a current events situation. This one came from last week....and you have to pause and consider the end comment carefully....it is a Bama moment:

"...no matter what it costs, we're going social.

If taxpayers don't pay it, the Chinese or Saudis will (with a title-loan, and we get to keep the car -- so long as we turn a blind eye to human rights abuses).

That's the new approach with both our political parties... do what you want, regardless of the costs, and borrow as much as you need from China, Saudi, and others.

Want to keep some car companies (and unions), borrow money.

Its like the US government is a 19yr old gal at college, that just got her first credit card."

This past week….we had an email in the office from our big 4-star general (really an admiral) that runs all of European operations for DOD. Normally, you rarely pay attention to stuff these guys say….it’s a $5 comment that you tend to forget within ten minutes. This time, it was different. This Admiral Stavridis is a common sense type leader. I can’t say that he comes from Bama….but a lot of his dozen-odd bits of wisdom sounds like something that you’d hear from the heartland.

First, always speak up and write with simplicity and precision.

Use humor when possibly…it relieves tension.

Prepare for the key events that occur.

Talk for yourself….be your own spokesman.

Carve out time to think, and share those ideas. Get feedback.

Take time to recharge and energize.

Don’t make decisions in haste or under pressure.

Details do matter but you need to be willing to accept new ideas and concepts.

Understanding the overall process of how things work….does matter.

Finally, don’t always trust your team or the lawyer involved to tell you what the law or regulation says. You might want to actually read it yourself and grasp the full impact of the law.

It was practical advice that works for Airman Snuffy, Sargent Snuffy and even Captain Snuffy. This Stavridis guy might be a bit smarter than you’d expect. The best leaders that I met while in the AF were the “coach” type….who sat down and explained the big picture and their strategy. They needed the team to function in one fashion and deliver….so they were willing to invest time to see that happen. The worst leaders were the ones who simply handed out vision after vision….without any inspiration or reasoning.
at Monday, July 20, 2009 No comments:

There’s a great story off CNN last week....about young foreign high school exchange students. Apparently, a number of these guys in the past year or two have come up and found themselves in a “nightmare of neglect, malnourishment and abandonment by those supposed to protect them”. I’m quoting CNN....whether completely true or not....I cannot say.

So now, the authorities have awaken from a deep slumber and are seeking criminal charges. In fact, even the State Department is trying to admit....to any reporter who will interview them....that they failed in some way to protect the kids.

"We at the Department of State recognize [because we] are responsible for this program we have to make sure we are aggressively overseeing this program and make sure children are well-suited," said State Department spokesman P.J. Crowley.

It is kinda amusing....because the state department has no real connection to this program except for the visas they issue and frankly....they would need a staff of three hundred people to properly manage this....which means more government cost for a program that ought to cost nothing.

Over in Lackawanna County, Penn....the DA is convening a grand jury to look into a possible crime where twelve exchange students were involved. He hints that they were treated in an improper fashion....improper food, hygiene, etc.

Here’s the thing....for the past year, I’ve been watching this German program which features five German kids each week....and it changes week to week....who are foreign exchange students. A couple went to the US but the vast majority went to other countries.

Out of every ten show participants, I’d say that five are in total shock upon arrival at their destination and shown a very unpleasant home situation.

There was the one 16-year old girl who showed up and was to live in a home in Chile. The house had dogs and they had crapped all over the place. There was mold and mildew on the walls of the bedroom. There was a terrible smell to the place. She spent one night and the next day packed the bag and went to a hotel downtown (dad had been smart enough to give her a credit card). The program folks went into a huge retreat and somehow found another place....which was “ok”....but you could tell that this 16-year old kid had expected alot more.

As each week’s episode comes and goes....you see a program which is very questionable in terms of what they offer these kids. There are positive stories though.

There was the 17-year old German boy who ends up in a rural community in Minn and finds that everyone is overly friendly and the house is great. Then he finds that there is absolutely nothing to do. The family sits around on a Sunday afternoon watching NFL football and he just sits there....questioning why no one is doing anything.

The purpose of this whole foreign exchange program....is to offer a different view in life of foreign lands. Maybe in the 1950s and 1970s....it had a totally different prospective and maybe it was run alot better. But today.....it’s not exactly a four-star program, and I’d question myself if I sent a kid of mine off to it.

The part I like about this...we will end up with some bureau within the state department now...funded by Americans...not the foreign exchange students....to monitor this entire episode. There will be a grand office building....three hundred GS workers....nice modular office furniture.....a $100k conference room with VTC capability....a travel budget of $32 million.....and at least sixty vehicles for these guys to travel around the US and meet exchange students. Meanwhile, North Korea is still waiting for its first exchange student.
at Monday, July 20, 2009 1 comment: