A Moment of Analysis 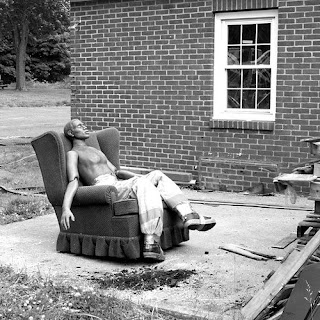 I watched the clip of the President's news conference this week.

There were three things I noted. First, I've come to the point of questioning the necessity of having reporters there and asking questions. You end up paying this guy $400k a year, plus another $100k on travel cost. Why not just get a dummy...like in the picture....dress him up....and put a speaker in his mouth and let the producer back in Atlanta ask the questions?

What I saw from the press in the conference....was a third-rate attempt to be a pretender or wannabe journalist. The questions basically sounded like something that a kid in the fourth grade would ask the president. Why pay $400k a year to some ABC guy to present this garbage?

Second point of analysis.....it became amusing how the president would be given a 22-word question....which needed about 90 seconds to really answer.....and he gave five to eight minutes of an answer....although it really didn't fit the question in the first place.

Am I the only one that noticed this? It almost was like some senator whose been trained to limit his response to seven minutes and he's been trained to speak up to 6.8 minutes of saying mostly chitty-chat or senator-spin responses.

Perhaps we should just give the question to the president in the first place a week ahead of time and let him practice his precise and concise answers? Oh, I forget.....we already do that presently.

Then the final point of analysis. There is this moment in the press conference....where we learn that we need to create a new national health-care program.....to cut down on government spending. So the trillion that the government is asking for.....really is saving us money? Right?

I kept thinking....maybe I misunderstood the whole program from the start. Maybe there's a secret 400-page annex that he's been reading and everyone else is forbidden to read until it passes? Maybe this is like the book....1984....where "War is peace; freedom is slavery; ignorance is strength.”

There are better ways of explaining this entire project.....and this was a 2-star moment at best.

The numbers? Four press conferences since day one. The first had a viewership of 49 million. The second was 40 million. The third was 28 million. This weeks? 24 million.

To be honest here Fox didn't do super-well with its show that played.....So You Think You Can Dance.....with around 7.2 million. The combined "BIG" networks carried around 20 million with the press conference.

Fewer people are watching each time. The next episode? I'm thinking he'll have to do another by September, when the health care package finally passes (it's hard to forecast, but if they don't do it by October.....it's dead this year and it won't come back in 2010). The next news conference numbers? I'm betting on 19 million. At this rate, in 2012....he'll have fewer than 10 million watching.
at Saturday, July 25, 2009 1 comment:

How I Got Used to Rationed Health Care

For twenty-two-odd years, I had absolute medical coverage via the Air Force. If I had the flu, I could make the sick call hours at 0730 and get a pass for work (it might take two hours to be seen but it was simple). If I had a broken finger, then they rushed me around...got the x-rays.....and set it in a matter of three hours. When I had food poisoning....sure I ended up waiting almost four hours to be seen, but they eventually got to me.

So there came the day of retirement and I elected to stay in Germany and work as a contractor. I looked at the free care deal as a AF retiree and the cost of the package via the company ($340 a month), and I decided to settle on the AF offerings.

If I gone back to the US....there were TRICARE packages within the miltary system that would have cost me something minor but moved me up in status. Being overseas in 1999....meant that I took the one and only option as a retiree....rationed health care.

It was six months later....that I wanted to be seen for a back pain....and discovered that I rated low enough, that they couldn't see me that entire week (this was on Monday). The second week was full. So I was offered Tuesday....going into the third week. I sat there....in a fair amount of pain but this was my one and only option.

Around 1 January 2000, I was sking in the Italian Alps and had this fair sized Italian gal hit my ankle and by the end of the day....I had a huge amount of pain. The next day we were driving back to K-town, and I figured on Monday....I could be seen at the base. I was wrong. They were nice about this, and said if it was a real emergency (like broke)....go to the emergency room.....otherwise, it was going to be ten days before they could see me. I popped a number of pain killers (not the nice ones that the Doc would have given, but the over-the-counter type), and got by. Most of my pain had disappeared by the tenth day, so it didn't matter about the appointment any longer.

There are around six episodes like this, up until 2004. The AF started to reprioritize retirees overseas and I bumped up a notch or two. I suddenly was able to get an appointment with usually three to five days of waiting....which I've come to be happy with. The hitch to this? Need a specialist after that appointment over at Landstuhl? It might take ten more days to see that guy. But you know....unless I want to pay the insurance coverage via the company and just say "free health care is worthless".....I'm stuck.

If I went back to fifteen days of waiting....what would happen? What if this was the norm across the board? Well...the emergency room would start to turn into the normal waiting room....with two hundred folks showing up between 8AM and 12AM. They would try to turn folks away, but folks would start to invent various extra ailments to ensure they didn't get turned away. The two or three doctors on shift at the emergency room.....would be trying clear this group out.....so another two hundred could show up by 1PM and start the next shift. All you need is one two real emergency episodes.....major car accident or chainsaw accident, and then the two hundred folks get pushed back into mid-afternoon.

What's curious here is that fifty years ago.....for half the problems that we have today.....we never went to the doctor. You had to have bleeding or be in really bad shape to see a doctor. Today, got a cold.....see a doc. Got a cough, see a doc. Business has increased.....but the ailments haven't. The neat thing about this rationed stuff? Well....if the doc has a nice TV in the waiting area....I could probably catch up on alot of Jerry Springer shows while waiting.
at Saturday, July 25, 2009 No comments: