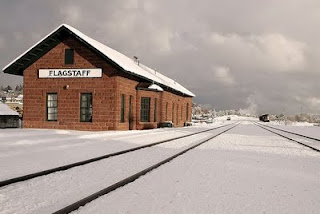 This is an interesting series of blog that I will make...ten cities that I love. They will come in no order....with simply comments and analysis.

Flagstaff is different from the rest of the state. It stays cool throughout the summer, and has snow accumulation in the winter.

It's one of those towns that looks somewhat modern but it has that 1950s look as well. The people? Strangely enough....everyone you meet....has a smile and appear awful friendly.

For some reason....maybe's the climate or the scenic background....but I've fallen for Flagstaff in some fashion. I could readily find myself living there.
at Sunday, November 01, 2009 1 comment:

Afghanistan and the Menu

There are various discussions underway by the President, his advisers, the CNN crew, the Pentagon, four guys from Mobile, Fox News experts, Ollie North, and Dallas Cowboy cheerleaders....over the Afghanistan troop request. The general in charge....was hoping for a minimum of 20,000.....maybe up to forty thousand if the President could agree to it.

Currently....based on the advice being given to the President by well over 300,000 experts....no one is sure of anything.

I sat and thought about this for a while and felt that so much advice was not helping. You really need to make this as simple as a Chinese meal. So are my options:

Menu One: Send an additional 88 Special Forces troops into Afghanistan and tell them to just kill Ossama Bin Laden, period.

Menu Two: Send four thousand Mississippi Guardsmen in....with forty-four CNN imbedded news-movie crew members. This is mostly to document the valiant efforts of Mississippi guys and provide a reality show of sorts over their screw-ups....thus getting the heat off the White House.

Menu Three: Send 8,000 tough combat troops in, but make them work with the Germans. The 8,000 will be confused from day one about the priority, and mostly worry about public opinion, rather than accomplishing anything.

Menu Four: Send 161 economic experts from Wall Street over to help rebuild the fragile Afghanistan economy like America's economy. The Aghans will either embrace them and keep them forever (might be a good thing for us, less economic experts).....or turn them over to the Taliban quickly (to dump them from hurting their economy).

Menu Five: Send 30,000 troops in, but put them at one location....one giant camp....and set up sixty cameras for a reality show to be broadcast twenty-four hours a day....with twenty generals flown in daily, and once a week will be a visit by some hottie Hollywood tramp gal to boost morale and get guys all peppy.

Menu Six: Send one guy in with forty million dollars and simply bribe the Taliban to be nice guys. It might work....but if this one guy disappears sixty seconds after arriving and ends up on Tonga....you know he was a bit corrupt.

Menu Eight: Offer the Afghans, the Taliban, and Ossama bin Ladin....the public option out of the health care package. Maybe it's enough to stop the mess. Well....maybe.

Menu Nine: Offer the GI's currently deployed to Afghanistan....the opt-out option. If they think this is stupid staying there and fighting....they could opt-out. I realize some folks might take this the wrong way, but then ask yourself what the Russians came to Afghanistan for, and why they eventually left. It's like relatives who come to stay a week at your house....and four months later....they are still there.

So there are my simple options. I doubt if the President will pick any of these....but stranger things have happened (VP Joe was picked, you know).
at Sunday, November 01, 2009 No comments: