The Meeting of Svengali and Andy Griffith

I have an associate in the blogger world….who had a reader come upon his site and then start a strange vendetta. My associate writes mostly right-wing conservative stuff…and this reader….is a liberal of drastic sorts.

The reader has ended up creating a blog of his own…but the entire contents are designed against my associate in an extreme fashion. I sat there and read the blog….forty-odd comments….all geared to counter my associate but....but in an extreme negative sort of way...as if a sole authority correcting a junior authority. Hours and hours of reading, research, and then commentary against one writer only.

I’ve tried find some reasoning in this…a vendetta of a Bama nature. Yes, both are Bama folks. It’s hard to imagine a vendetta amongst Bama guys, unless it was Auburn versus Bama in the NCAA or such….but this has turned into a very one-side effort by TruthSeeker.

The reader….TruthSeeker is his one name….has various aliases. My associate has gone to the extent of banning this guy because of the language used in commentary. I thought this was a pretty extreme measure but came to view a number of blogs on his site…and find them slanted in some fashion. Whatever TruthSeeker writes is the truth…anything by my associate is false. It’s a concept that works in a one dimensional world…but not in reality.

So I surveyed this guy. He’s from the Helena area of Bama. He doesn’t ever mention this and I simply know it from some information that Google puts out. I also can gauge from the blogs that he writes…he’s been through university….got a degree….probably in political science (not history, because he never uses history in his arguments).

He spends an awful lot of time analyzing what my associate writes….as though it’s a priority of sorts but beyond political hard persuasion….he limits the entire spectrum.

This is a guy who likely teaches school. He’s the type that can put an entire weekend on some blog project….writing 150 lines….of hard intense commentary…..all slanted.
I get the impression he doesn’t have a big circle of friends…and if he does….they more or less play along because they really don’t want to hear the intense left-wing commentary. It’s ok to have a friendly discussion with folks on politics….but the guys who spend hours on this and really keep trying to convert you like some Baptist minister….don’t have friends.

I ended up finding one of TruthSeeker’s blogs where he surveyed everyone who wrote on my associate’s site. I was included as number one. It was a curious thing….he basically gives out stars of some variety….which four stars means you are a radically lost Republican of a major loser variety….like Glenn Beck or such. TruthSeeker decided that I was a one-star guy…..still a lost right-wing guy but marginally lost. I sat there….mostly laughing over his analysis.

Finally, there is this curious note about TruthSeeker...he's using an word on some occasions...svengali. It was a word that I was not familiar with (being from Bama, you must remember...I only have a vocabulary of 3,648 words).

So I had to look it up. Basically, it means an individual who has unpleasant intent to manipulate another into doing what is desired. Both James Carville and Karl Rove are used as svengali-types....or at least some folks on the internet want to claim that.

So, here's this guy...with some mental block (note, I didn't say chip)...whose best efforts are centered around drastic manipulation...and this is the best they can do? There are a thousand constructive things on the face of the earth that you can make as your life's chief occupation...which more than 950 of them are positive in some sense...and you pick this trait of being a svengali-dude?

I don't get it. I'd mow four acres of yard before I'd put one single ounce of effort into this type of mental show. I'd probably paint a barn roof....before I'd toss in one single minute of effort toward being a svengali-guy. I'd probably chop up a whole truckload of firewood before even envisioning a single thought toward svengali-living.

So sitting there somewhere tonight….likely reading over my associate’s blog….TruthSeeker is heating up and conjuring up a hundred-line response and trying his best to make this as slanted as possible.

Maybe I'm not getting the jest of this at all...but if Socrates or Plato were here...they'd express some curiosity over what exactly is gained by these efforts. To waste so much time on negativity without much to show for it....doesn't make much sense. Life is awful dang short...and it might be wise to find a way to show something for it. Even in a Mayberry world...Ernest T Bass eventually has to find a moment of reality when he faces up to Andy Griffith.
at Thursday, November 05, 2009 1 comment: 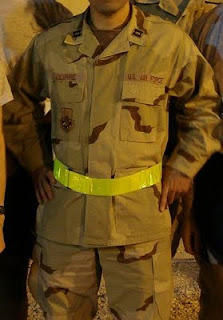 The Air Force in Europe has a policy on every GI wearing reflective belts during periods of darkness or approaching darkness (hint-hint: this means up until 0730 in the morning, and as early as 1700 in the afternoon). Naturally, they’ve all been grumbling about this for a decade now about this. The grumbling….has doubled over the past year.

Today, on page 3 of the Stars and Stripes paper…..it was a major story. Airman and NCO’s are dumping their criticism of reflective belts. Frankly, they’ve all had bad experiences. They run off in the morning to work….and realize half-way to work that they left the belt on the table. They hear the yells from folks….”where’s your belt”….and stand there having to explain to some NCO or some officer about where the belt is laying, and they don’t want to hear the story.

I spent twenty-one years in the Air Force….and other than the first two where we had to sew reflective devices on the jacket….that was the only time that it was ever mandatory for me.

The thing about this…which irks most Air Force guys…is the “corrective attitude” of so many folks. If you aren’t carrying out the directive….you’ve got a problem. Well, out of 200 attempts in a year…to remember every piece of your uniform deal….this extra belt is always an item which could be left at home or in the wife’s car or the husband’s truck. You have to remember…it’s not attached…and for seven months out of the year….it’s not required.

The amusing thing for me….there are like five different variations of reflective material…some yellow…some orange…some gold…some white blue….and you start to laugh over the assortment. It was a nice safety idea to start with…and kinda spiraled from that point on.
at Thursday, November 05, 2009 No comments:

It was a fascinating speech yesterday by the President. He tried to do a tough talk on education. He went through the various criteria items for winning $4.35 billion in federal grants….which made great bullets for media guys to pump out to the public. First-class education….real education….sustainable education…you know all the magic words because you’ve heard both parties use them constantly over the past twenty years.

Then he said an amusing thing….teachers should not be judged by how their students perform.

I kinda sat there….it’s a “free-ticket” expression. He probably didn’t mean it that way, and there is some discussion from the teacher unions about some kinda method of measuring students, teachers and schools.

As a kid…around the seventh grade, my mom came to realize that I had no grasp of the meaning of nouns, pronouns or adverbs. English classes were worthless…but I was a kid reading forty to sixty books a year. On the other hand, I knew more history than any kid in the school.

As a kid, I was showing lousy grades in math up until the end of the ninth grade. Lousy teachers? No….I was bored by their ability to spend six weeks teaching four pages of material. I can remember an entire six-week period in the ninth grade…where we barely advanced three pages. The teacher could not get across the “magic”.

A year later, I arrived in a class where the teacher handed us a math book and just nudged us alone at a general speed but you could advance faster if you wanted to. Two months later…I was two chapters ahead of the group. By early January, I was finished with the entire book. After I learned the topic….I took the tests and advanced…I didn’t sit around for five weeks and become bored.

We aren’t about to fire them or let them go….and the best we could do is simply start cutting pay raises and encouraging them to leave. But who fills this void?

That would be the curious item in the President’s agenda. Is there some massive plan to push a herd of new students through to be teachers in four years….and then push the old herd out? The universities would be happy…the parents would be happy…and the students might actually learn something.

And what happens to the herd of crappy teachers? That would be curious question. Maybe we can send them back to school and get them a PhD in something and herd them back out somewhere else.
at Thursday, November 05, 2009 No comments: