The Dark Side of Battery Cars

Ever since the new administration stepped into the White House.....they've been keen on electric cars. In fact, so keen....that they'd really like to fund a number of companies in the developmental stage. Most business analysts are against government funding like this. Several companies benefit and several don't. You can smell some guys having an inside deal with the administration on this. Whether they ever get to the final stage with the best electric car or not....may not be on their top ten priority list.

So the US Department of Energy has awarded almost $2.4 billion in stimulus money for these purposes.....Etec (Nissan's partner in the US) got almost $100 million.

It's a curious thing....the US government never got involved in VHS and Beta tapes.....or distributing money to see which would be the final winner.

It's just as curious that the US government never got involved with condom development....to have the best possible US-developed condom.....as if it mattered.

It's just as curious that the US government never got involved in developing the best beer.

So I could go on and on with this comparison. But why waste effort? I'd rather go to the second part of this dark side.

Eventually....after folks get bought off on this electric car episode....and six huge batteries in every car....you have to charge this. The grid structure currently in the US? It'll never support a massive 3 million electric car requirement. We'd need lots more power generation....way more than we currently produce.

Where would massive power come from? Nukes. Yep, nuclear power is the final connection to this puzzle. You can't charge up three million battery cars.....without another twenty or thirty nuclear power plants in America. You've got no choice.

So as much as you'd really like to go to a battery car and cut off those Arabs....you have to accept a second evil....nuclear power. Are you prepared for that? Thats the one thing that CNN and the journalists tend to avoid when they show these nifty updates on electric cars. You need lots of power to charge up the car.

The timing of the charge? Well....that's another interesting thing. You come to the garage where your car was charging for two hours after you came home last night.....say six to eight.....you were pumping lots of electricity between those hours. Then nothing. You leave for work, thirty miles away. You get there and then connect to the bosses grid box.....and from eight to ten.....pull in a lot more juice. Figure four hours a day....in two events.....you need massive power.

Then ask yourself this....will the boss donate free power to you? Most likely.....no. So he's going to have a company come in....install a charger.....and a coin box. You can figure a buck for a decent 1-hour charge. Maybe even two bucks. Nothing's free, you know.

So as you smile and gaze at the CNN updates on battery cars.....think long and hard.....they are barely telling half of the whole story.
at Saturday, November 07, 2009 No comments: 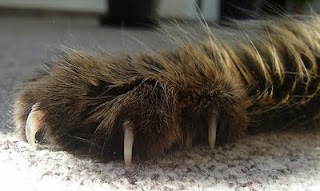 It's an interesting trend....which shocks me. Out in LA and San Fransisco over the past month, they've been pursuing a change to the city code....forbidding declawing of cats.

Thirty years ago...I would have had no opinion on this. Today....it'd be the last thing that I'd do to a cat. After sitting and observing them....they need the claws for a hundred different purposes.

If you've been annoying them greatly....a two-second swipe of the claw is usually sufficient to get the message across. For defense purposes....it's absolutely essential. For climbing up things....they have to have them.

It appears....based on various news reports....that the cities will be successful and ban these. Course, if an owner still wanted to do it...they'd just drive over the county-line and get it done. But now, there's a bit of peer pressure involved. You don't want your neighbor asking stupid questions when they don't see claws on your cat.
at Saturday, November 07, 2009 1 comment:

From the Fort Hood episode....hidden in 5,000 stories from yesterday....there is a odd observation. I sat there looking at the video of the cops at the residence of the guy. I quickly observed that it wasn't what you'd be thinking when it came to living arrangements for some Major. They actually pay these guys a good $1,300 a month for housing usually. This was a cheaper place from my observation....REAL cheap.

So it came out in the KDH news.....this was a $350 a month apartment complex....where mostly junior personnel from the Army lived. I get the impression that he was the only officer at the complex.

Why would a guy pick such a non-superior apartment deal? Why not rent a house....which he could have easily done? You could have gotten a very upscale place and lived comfortably for $700 in the local area. You could have bought a RV trailer and lived out of it if you were single....and actually paid it off in 18 months.

Around twenty-four thousand years ago...a cousin of ours....kinda died. The Neanderthal. Over the past two decades....I noticed an awful lot of research, commentary, and even video portrayals of the Neanderthal. For a number of scientists....it's a puzzle that cannot be solved.

First, we know without any doubt.....that we match up within 99.5 percent of the DNA. There is a .5 percent difference with this DNA between modern man and the Neanderthal. Why .5?

MSNBC had an interesting bit on this discussion this week. They finally got around to a question that most real science journalists would have avoided....did modern man and the Neanderthal have sex? A couple of scientist got all into this discussion. You almost get the impression that they have this fantasy of sorts.....Gus the Neanderthal meeting Wanda the modern human....and then.....what? You just don't know.

There are suggestions that Neanderthals were a bit violent.....maybe lacking some certain graces....maybe being a bit harsh. It might not have been a great four-star date on the first meeting. In fact.....Wanda probably never went back out with Gus ever again.

The curious thing....was it Gus and Wanda....or was it George the human being meeting Betty the Neanderthal? Was George a average shy human being dude.....and was Betty this tough, bitchy, demanding Neanderthal gal? Did love blossom in this case, and George and Betty ran off to mountains to elope?

I pondered on this. I could see some guy like George....standing there by a tree....eyeballing Betty as she was digging for roots or cleaning a deer for dinner....and then asking from a distance if she had any boyfriends. Betty likely looked at George....felt some passion with ordinary human dudes.....and did some kinda Neanderthal wink at him, and they ended up by the warm springs in a passionate embrace.

At some point in the world's history.....Neanderthals couldn't advance....and died out. It would be curious to know the absolute reason but it appears we will never get that far....and instead...simply end up asking more questions that we really can't answer.
at Saturday, November 07, 2009 No comments: