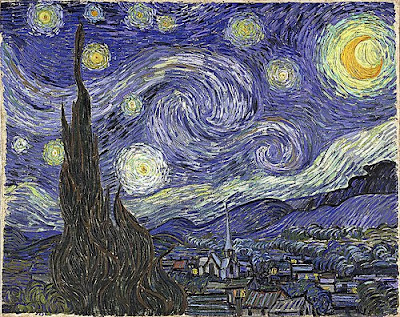 A guy from Bama....rarely has an appreciation of fine art. It took me around fifty years to reach this stage....and I will be honest...sometimes..."fine" just ain't the same kinda "fine" as a Bama guy is used to.

This piece above is from Van Gogh...."Starry Night".

I have often tried to understand Van Gogh's view of the world. Nothing ever has a normal appearance or feels right. I often come to the conclusion that the guy was either nuts....or sipping heavily on booze to get the wavy lines. Either way....it worked.
at Sunday, November 22, 2009 No comments: 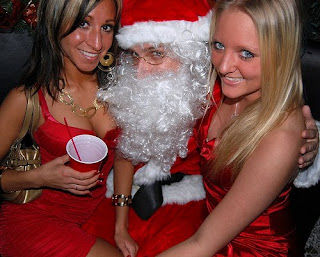 Most communities have Christmas parades now. When I was a kid...there was maybe one or two parades within fifty miles of where I grew up. Today...almost every single town of any size...has a Christmas parade.

The thing about parades...there is a guy or committee in charge...and they make rules. You have to enter your vehicle. Things have to be in good taste. No booze. No drunk Santas. The list goes on and on. Some cities now have almost twenty pages of rules attached to the entry form.

So, Raleigh, NC came out this week....with a new Christmas parade rule...which just adds onto this mess. No Mrs. Santa.

Yep....no Mrs. Santa. Now, when I heard this....I was thinking of a hot Mrs. Santa...black stockings, white cape, black leather boots up to the knee, with a heavenly exposed chest. Apparently, the Raleigh folks have a different view on this....anyone else by the name of Claus.....either Mrs or doctor or professor or even Ricky the gay Santa Claus....just confuses folks...especially kids.

In fact....they said only one Santa suit in the entire parade was to be accepted.

I sat there....trying to compare Raleigh and Bama. Folks in Bama tend not to be confused. I don't know if its the effect of dry counties, Auburn brain-washing, massive consumption of ice tea, the Baptists, the Republicans, or Karl Rove....but Alabamians just aren't that naive.

Somewhere out there...is some Mrs. Claus tonight...mad as hell over these restrictions and asking Mr. Claus what the hell is going on. He's confused...wondering what idiot wrote these rules and caused all of this domestic trouble....and lightly sipping Jacky D's....shot-by-shot. He's nodding at Mrs. Claus's complaints...and wondering why folks needed this damn parade anyway.

Meanwhile...down in Bama....there are probably 300 women with Mrs. Santa outfits in Red Bay....and all plotting for this massive drinking game as they march down with the Santa float in the city Christmas parade. They've probably got a couple of cases of Jacky D's on board the Santa float and doing shots every one hundred feet until they get to the end.
at Sunday, November 22, 2009 No comments:

I kinda figured it would happen one day...so this week...the story comes up. An American university has taken the step of requiring a weight and body mass index on all students. Their basic requirement? If you fail their weight or body mass standard...you are required to take a nutrition and fitness type class.

This class covers nutrition, stress, sleep, and mandates walking, aerobics, weight training and along with other physical activities.

Naturally....students are not exactly happy over the deal.

This starts out in a small public university in Pennsylvania...Lincoln University...that deals with mostly black students.

The heat got turned up this week at the university...when Tiana Lawson...a senior...finally sat down and wrote letter to the student newspaper. She basically said....she "didn't come to Lincoln to be told that my weight is not in an acceptable range. I came here to get an education."

With spring classes only eight weeks away...I'm guessing that Tiana suddenly realized that one of those mandatory classes left her now...is this nutrition and fitness class. This is something that she really didn't expect when she started with the university.

If you look at the body mass index situation....a normal rating is between 18.5 and 24.9. Anybody with a rating over 30...is required to take the "Fitness for Life" class....which requires three hours a week. I'm guessing there is a test somewhere in the middle of this mess...but don't ask me how you'd pass or fail...or if you could pay off the instructor with beer money or sex.

For those who've never played the body mass index...typically they measure your gut, and then subtract your neck size (all in inches). A typical average guy will have a 18 to 22 rating. A big guy...probably up around 24 to 26. During my military career, I was always the 24 percent guy...as much as the Air Force would allow before they got into your business.

Football players....because of the weight training...build up huge necks...so they will all be around 24 to 28 on the rating...while they look overweight...they aren't. Don't ask about the logic...it's probably a Auburn engineer with the "six-beer" formula that devised this rating system.

So it'd be a fair statement to make...that anyone over 30 in the rating...is pretty big in size.

I'm kinda laughing over this popping up in college. Usually, this is the last place that would care about your fitness...while they serve you the cheapest meal possible at the school cafeteria. They usually just want you to show....avoid being drunk during school hours...and just graduate...while naturally paying them the money they want.

As for program here in Pennsylvania? If I were amongst the upset students...I'd just show up...act dopey like you do in other actual classes...and stand there for the three hours a week. The curious thing is that if one single kid gets a heart attack or some kind of injury while in the midst of this business...the school will be sued for triggering it. While they may have thought this was a wise idea...their idea won't stand up much in court.
at Sunday, November 22, 2009 No comments: