As the Fog Clears

This is a woeful tale of reality....where you would have predicted one thing, and another would have occurred.

GS worker conversion is underway at Ramstein. Around 110 contractor billets will eventually switch over to GS. In the beginning, the military bosses were all peppy and happy over this. It would save money, and the "poor" contractors would be brought in the front door.....to take over their present jobs.....as GS employees.

So the first wave of the jobs have been advertised (only a small group....maybe a dozen)......and barely half of the present contractor group.....got tossed into the second group of potentially qualified folks, who might get a invitation for an interview. The rest? They were either non-qualified or failed to make the "grade".

A number of the contractors had never messed around with USAJOBs or their resume process. Some of the guys likely missed the DD214 requirement, if you had military time (you have to have a copy with your job application). The same issue pops up with guys who might have forgotten to include a copy of their college transcript.

The amusing thing now.....is that a bunch of guys are looking forward and pumping out resumes left and right......to leave. The replacement GS employees? Well.....if the organization was lucky...maybe by April.....these replacements might arrive. Who runs things while folks vacate? That would be a curious part of this story.

Back in January, as I knew my position was going....I asked myself a dozen questions. None of them had a clear answer. Everything was muddled up and questionable. The genius of this GS conversion? It becomes less and less genius as each month goes by.
at Wednesday, December 16, 2009 No comments:

The most stupid management event I ever saw at my current job?

Our directorate boss….came up with a small group of Lt Col’s….and decided on a reorganization….without any thoughts from the rest of the entire division. Then the boss announces this reorg. Four weeks later….we are to start this mess.

So here was the systems division. The top layer of five officers were peeled off and moved upstairs to another office. Then a dozen officers and NCOs were directed to move from upstairs down to our vault.

They decided to bring all their furniture….rather than buy new stuff and have it installed by professionals. So an entire week was wasted on this move. Self-help was a disaster.

Me, a junior Captain and another NCO were ordered to stay…because we knew the systems processes and how things worked. This was supposed to help integrate things into this reorg.

Almost immediately, we got the feeling that the new Lt Col over our work area….had no concept of what systems support meant. Six weeks later….I had the superintendent walk up and announce that both me and the other NCO were to be moved to a non-systems position. I sat there….scratching my head. The Captain was gone in six months….so it made sense to keep both NCOs in the shop through the next year. The entire comprehension over intelligence systems requirements were to disappear.

Day by day….the boss got less and less agreeable to this systems support idea.
Customers were complaining….our division chief couldn’t understand why there were concerned because his main idea of the mission was customers at other bases….not within the directorate itself.

So sixty days into this mess….the Directorate Colonel went off to a meeting back in the states. There, he was informed of this massive Air Force reorg coming in six months….which would re-reorg his entire mess currently. Then the boys at the meeting were shocked that he had done something without consulting them.

So we did something that no Air Force had ever done before….ten weeks after a reorg….we UN-org’ed. Yes, we were directed to move everyone back to where they were before.

I sat there….mostly laughing…for an entire afternoon. I was supposed to be moved to an entirely different shop…so that stopped. My boss, the Captain….was all smiles. The dozen guys who moved down? They were very upset because all of the furniture had to be disconnected and moved back to the fourth floor. After a week….everything went back to the same ‘look’ as it was four months before. 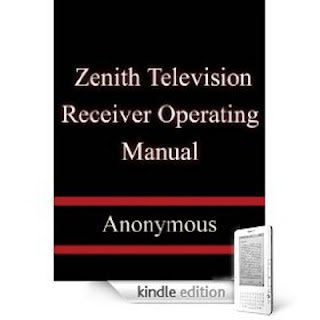 About once a month, my brother (the engineer),will put down the oscillator and the $50 Radio Shack voltage checker, and hand out an analysis.

Today was the Zenith Theory.

The president in this scenario has taken up the Zenith repair philosophy.....he's learned what the issues are.....acting like the old repair guy who would come out....and gone to work on your old zenith tv. He'll pull a part or two out....put some old parts in that he's got left in the shop....turn a knob or two.....then, its fixed.

As you gaze at your Zenith repairman.....and he asks $75....you start to think "dang, i could have done all that. The thing is that it was never more than $75, and the parts always appeared to be the same.

It's an interesting theory that he's conceived....taking brief moments away from technical analysis of an electronic nature.

If you remember from the beginning of the administration....here was special committee after special committee. Countless experts who were supposed to be part of this giant "fix-it" machine. Frankly, it was just a farce....to make you think that 300 people were in on this massive repair of the US government. The honest truth.....there's probably a 13-page Zenith repair book that the President bought at some flea market in 1973 and he's using this as his practical fix-it guide for America.

I stopped here and pondered this....and then kinda wondered if my brother had also bought a 1973 Zenith 13-page repair book. This Zenith club could be like the Free Masons.....just more dangerous.
at Wednesday, December 16, 2009 No comments:

The one of a kind governor....Arnold Schwarzenegger....desperate for state revenue for the state....wound up in Copenhagen at the climate talks. Basically, he got up and urged everyone to have another UN climate summit....just for cities....and naturally, he offered to have it in California.

His quote? "The world's national governments cannot make the progress that is needed on global climate change alone."

Palin came quickly up and harped on the mess that the Governor was making in California on the climate topic. Arnold did his best to defend himself....but in the end...she was right....California isn't bringing any new business to the state, and state revenue is flat.

If you had to start a new business tomorrow...you'd likely come to Bama, Georgia, or Mississippi. These are the states with revenue pots that have energy to grow.

Arnold is desperate to get a conference....to drag a bunch of dimwits out to LA and pump up the local economy....because no one else is coming out.
at Wednesday, December 16, 2009 No comments: 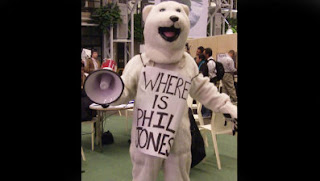 Over at the Copenhagen climate conference this morning.....some dude walked in and was dressed up as a polar bear, with a sign on his chest: "Where is Phil Jones?"

Phil, for those curious.....is the British researcher on leave from the big university there in England. While investigators sort through the climategate mess....Phil is sitting around and doing nothing. This includes the lack of Phil over at Copenhagen.

Naturally, the polar bear had a megaphone and wanted to know "where Phil was."

This lasted a few minutes and probably got some folks to laughing. Phil would have been there in the middle of this mess.....but presently, Phil is getting way too much attention and probably worrying about what else might come out.

After the polar bear did his dance.....the chief person of the conference....quit......with the Prime Minister of Denmark taking up the position now. This was mostly because NOTHING is really coming to a real conclusion now. The boys are worried.

The British press reports that another meeting....for the summer of 2010....in Mexico City.....might be the place to really accomplish another Kyoto-like treaty. Presently, things appear pretty screwed up.
at Wednesday, December 16, 2009 No comments: