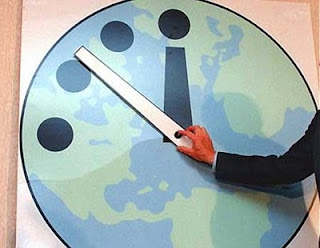 Over the years, I've come to notice various groups of folks that exist.....and they have some club of sorts. Like the VFW guys who meet, drink beer, and discuss war generally.

Then you've got the Auburn graduates, who meet, drink beer, and discuss either college parties, football or the best way of digging a septic tank.

Then you've got the environmental guys who meet, drink beer, and discuss the collapse of civilization.

Up in the upper layers of society, we have another club of sorts.....mostly intellectual dudes who meet, get all peppy, and then discuss world destruction. They refer to their vision as the "Doomsday Clock" which gets moved up or down depending on how close they think we are to the world being destroyed (which is worse apparently than the collapse of civilization).

So the boys have met, and the Doomsday Clock....as of 3PM tomorrow....will be adjusted. And this adjustment....is going to the negative point....meaning, we are advancing toward world destruction. The curious thing here....is that we are doing this without George Bush. This has to be worrisome to some folks....that things would go negative, without George Bush around.

Frankly, I'm thinking a bunch of guys associated with this clock business....don't have much in life to worry about. They ought to spend more time down at the VFW or at Wal-Mart....and get a life.
at Wednesday, January 13, 2010 No comments:

Frankly, I don't give two cents for this entire discussion going on with the Jay Leno thing. I haven't watched an entire Jay Leno show in eighteen years. I sat and watched about ninety minutes of news yesterday....and I swear....at least twenty minutes of this was dedicated to Jay and his woes....or NBC and their woes.

Then, the boys woke up and realized that Jay still had potential. So they created this show for Jay....different time slot but the same Jay. It was a loser, and the local stations hated it.

Meanwhile, this Conan character....wasn't blazing trails with his new deal.

So some wizard at NBC came up and decided that they could repackage Jay...for thirty minutes....move the tonight show....which had been at this slot since Moses parted the Red Sea....and fix all their problems.

Conan is unhappy or at he pretends to be. Fox is hoping to grab the unhappy Conan. Jay is standing there and wondering how this will end.

Meanwhile, I'm sitting there at 1030 last night....and there's some great stuff over at the Discovery Channel and the History Channel. I'm wondering what this whole mess over Jay and Conan is about. Then I flipped over to the QVC channel and saw this great Bushnell Weather FX 3-day AccuWeather Forecaster (batteries not included).
at Wednesday, January 13, 2010 No comments: