Archaeology Magazine is putting out a new article this week. We are edging closer to the day...when some smart guys at some university...will complete a sequence of the Neanderthal genome.

Yep, at that point...they would have the ability to recreate Caveman Joe's DNA...and the Neanderthal would be a reality once again.

I should correct myself to a degree...the sequence on the table currently...is coming from a 30,000 year old woman...so it's Cavegal Wanda. I should add as well...the German guys over at the Max Planck Institute are involved in this process.

The odds? One hundred percent chance.

The ethics? That's another question.

Over the past year or two....some folks have started to real suggestions on the table as to how Caveman Joe or Cavegal Wanda died out. The most realistic possibility? Their bodies were made for extreme cold....and when the glacier age came to an end...and 90-degree temperatures came around...the Neanderthal was overcome by heat stress and heat-related problems. They weren't made for a moderate temperature....at least that's the current idea.

So here we are...in the weeks, months, and years before we reproduce Cavegal Wanda. Someone....somewhere...is going to do it. And after you produce Wanda...Caveman Joe will come next. Naturally, someone is going to want to introduce the two...and hope they match up and produce offspring. Course, if Wanda doesn't care for Caveman Joe...and prefers Randy the speech technician dude instead...then we've got big issues.
at Wednesday, February 10, 2010 No comments:

DC, the Whiteout, and Reality

It's the third snow day off now....because of snow issues here in DC. We were all told to leave at noon last Friday, and haven't been back to work since.

For those who haven't ever glimpsed the operation of DC...it's unique.

First, I would say around thirty-five percent of all government employees (not just the Pentagon)...make their way to work via buses and the Metro. The interstate and road system would never be able to handle one hundred percent of the traffic if they drove.

Second, strangely enough...the subway...really isn't a subway. There are various pieces of the Metro which are above ground...with a electrical connection that dies off if snow or ice is eight inches above the ground.

Third, when you consider the enormous amount of manpower....centered in one region of roughly twenty square miles...and all dependent on roads and subways working...it's bound to be a test of limits at times.

Fourth, then you come to the economic pole of sorts. From my district of Arlington...I'd say that forty percent of the folks there...HAVE TO use the bus and metro system because they just don't make enough to own a car or afford parking costs.

After living here for over a month now...if anyone were to ask me about all of this government operation....I'd say the time has come to start funneling pieces and parts out of DC. My own headquarters...DISA...is moving up to the road by about twenty miles to Ft Meade. There are hundreds of pieces of the US government that could move out twenty to forty miles from DC....and lessen the pressure points

The thing here is....if you went back to 1975...it was fewer people making this drive or ride into DC. No one in 1975 could have possibly imagined the amount of pressure on the infrastructure and people themselves....getting into work. We are at 2010 now...so stand back and imagine 2025. More people? More subway? More buses? More traffic?

Something here doesn't make sense. The whiteout, if anything....has proven a point. DC has hit absolute maximum.
at Wednesday, February 10, 2010 No comments:

Here is the topic of discussion. Some education folks over in North Carolina....the folks in charge of the public school system....want to shift gears and only teach American history from 1877 to the present in the 11th grade.

I sat and pondered over this scheme.

Today...the present deal is for ninth-grade students to take world history. A kid in the 10th-grade studies civics and economics. And an 11th-grade student takes a complete U.S. history, which starts with the 1700s and proceeds to today.

What they want to move to....is year of U.S. history in elementary school and middle school. Then this high-school tenth grade civics class would include learning about the nation’s development and foundation. Finally, the high-school U.S. history class would start from 1877 and move to today...skipping all of the revolution and the Civil War.

You can imagine this scene being played out in North Carolina. Lots of folks are upset. Other than this basic history lesson somewhere around the 6th or 7th grade on American history from the beginning....there's no mention after that point. The Constitution? Well....it does get mentioned and covered in this civic class...so we aren't losing much there.

Other folks are upset because they went through the same history classes and remember little to nothing from 1776 on...and probably have a fair memory of history from 1985 to the present...and that's it. They passed history by memorizing facts just enough to get by.

Both groups have a point here.

I actually like this idea to some degree...but it's just a quarter of what we should do. I'd also like to trim about forty percent of science out as well. Let's face it...today at age 35...what the hell do you remember other than (1) lava is damn hot, (2) if you let grapes sit for a while...they ferment and make alcohol, and (3) a comet or meteor once hit the Earth.

I recall two entire years of science in the seventh and eighth grade...where I remember absolutely nothing. I memorized about thirty things a week...and passed with a C-minus.

Math? Pretty much the same way. Half the kids in a regular math class....through the twelfth grade....don't need algebra.

English? Remember those funny diagrams where you have several upward slants to the right....which meant something but you never had a grasp of what the heck they meant? How about the vast writings of Shakespeare? I remember some English teacher trying to use Romeo and Juliet for almost six weeks of Literature...and we all sat there bored out of our mind with no vision of Shakespeare or an appreciation of Romeo's great lines.

So after we take this turkey carving knife and carve about thirty percent of the current regiment out...how do I fill it? Well...I'd start with an entire year of philosophy and logic...introducing punk kids to Socrates, Plato and Aristotle. Call it an introduction to thinking.

I'd toss in a four-week class on recognizing bold faced lies. Give these kids an hour here and an hour there on how to handle car dealers and their stupid sales routine. How about four hours on congressmen and senators...and they tell you something which is a lie...and how you grasp it is a lie.

I realize carving out math, science and literature is a drastic and harsh thing...but if this was such a good idea about carving on history...then this makes perfectly good sense. At least I didn't come up and suggest that we remove the number "8" because it's not used as much as the other numbers.

I'm hoping you guys from Bama don't suddenly start to ponder on this removal of "8" as a good notion. Believe me, it was just a sarcastic suggestion.
at Wednesday, February 10, 2010 No comments: 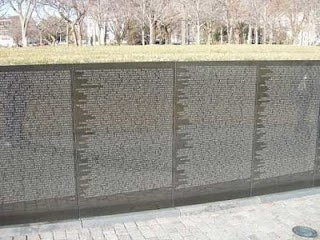 It's been two weeks since I did my walk around the Vietnam Memorial.

For some reason, I thought it was bigger. Maybe it was the camera angle or the impression it gave. The thing is that you can't really walk by it without thinking about each individual name. Each tells a story. Each leaves a tragic legacy. Each has its moment of sorrow.

I stood there and a guy came by with his family. He was a Vietnam vet. He spent a few minutes at the registry book, and found the name he was looking for. Then he came to the precise stone, and ran down the names until he came to this one name. I stood forty feet away....enough to visualize the moment but not close enough to hear the conversation.

This guy spent a good eight minutes describing the moment. His face was intense. His hands were describing things going on around him. His six family members were standing there and listening to every word. He wanted to tell them about this one guy and what this guy did. He eventually pulled out a piece of paper, and scratched the guy's name over onto his blank sheet.

His family stepped back, and he stood there gazing at the name. I got the impression that it was his first trip to the wall.

I turned and left. I could probably sit on a bench by the wall for hours and watch people go through this experience. Every name on that wall has a two-hour movie that should be made. There are a thousand pages of text to explain their life experience, and their final minutes. The sad thing is that we merely get the name on the wall.