The Independence Institute went out and asked for government data. Eventually...it took a Freedom of Information Act effort....but they found that the Homeland Security folks....just in 2008....lost over a 1,000 computers or laptops.

What Homeland Security said in the end...was that NONE of the lost computers contained sensitive or classified data. Having worked for the Air Force or DOD for over thirty years...I would say the chance of this statement being true...no sensitive or classified data...is about 1 percent. And if it were true...then it'd be the case of a bunch of guys having computers or laptops that they aren't using for daily business...which they really wouldn't want to admit.

What happens from a case like this? The congressional folks will eventually ask enough stupid questions...and Homeland Security has to hire 3,000 folks to control the losses.

How do items like this disappear? There are basically two ways. First, you turn an item into disposal but you screw up the paperwork so that it doesn't get removed from the list...then you move to another organization and the 'memory' of the episode disappears entirely. A year later....the organization is trying to clean up this mess and can't grasp that they've already turned the item into disposal.

The second way? Guys leave their laptop out in a open office....and then return tomorrow to discover it gone. In-house theft. With the thousand odd items...I can only imagine that over half fall into this category. Leadership really hates to stand around and start pointing fingers at their own people....so they avoid the discussion entirely.

So, it's your money...stolen from the guys who supposed to be protecting the homeland. And they swear up and down...that nothing sensitive or classified was lost.

You want to have a drastic effect on theft? Thin client...a dummy terminal...like we had in the old days. But don't worry...we never learn.
at Friday, February 26, 2010 No comments:

The best quote from yesterday's health care debate? It comes from the London Times:

"Watching American politicians argue about health care can be seriously damaging to your health. Symptoms include migraines, extreme fatigue and sudden violent urges."

There was this moment when John McCain was responding to something...and then President wanted to step in and remind John that we aren't in the campaign mode anymore and he was President. I've watched that 90-second exchange around five times and must admit the low class comment from the President made him look like a Italian political figure.

For those of you who missed the debate...don't worry...you probably didn't miss anything worth viewing. In fact...if a choice between seven hours of debate or seven hours of Tom and Jerry cartoons...I'd pick the cartoons.
at Friday, February 26, 2010 No comments:

Just Observations from the Debate Today

I've watched around 75 minutes of the health care debate from this afternoon. I can't bring myself to watch anymore.

Three simple observations. First, the idea of a debate between the Republicans and Democrats...with the President as a "ref"? He kept throwing flags like some NFL referee and I kept thinking....we didn't really design the job as President to be this kind of character. After eight of these flags....I just started laughing.

Second, if a retired guy had to sit there with his wife for the whole six or seven hours....watching this go back and forth....he would have been edging real close to the remote control after two hours. I'm guessing 3,000 wives probably had to call the cops this afternoon over a relationship issue brewing from the TV show. A handful of guys likely got clobbered, shot, or knifed.

Third, about fifty percent of the folks on the screen were 65 or older....and frankly, I'm shocked that they didn't fall asleep toward the half-way point of the show. I scanned the room in the first twenty minutes and kept thinking if this were a real office meeting for six hours.....folks would be freaking out and falling down on the floor.

Frankly, I'd rather the President stay presidential and the congressional guys stay like idiots. Once you start mixing and matching here....you tend to fall into the Mussolini-trap and the public thinks you are some kinda character actor....and not a president. 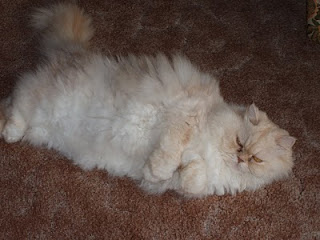 Somewhere around fourteen years ago, this house cat arrived, Micky. He'd been bought off by customer number one, but they came back four months later with huge issues over his shedding hair....and so here was a 8-month old cat who was going to have problems in finding an owner. Obviously, I didn't really think much over the deal....and so he came to be the house cat.

For around ten years....I can't really say that I noticed him too much. There was the episode where he followed me outside one evening, and I re-entered without him. Sometime around 2AM, I woke up and could hear this cat whining at the front door....and walked down to let him back in. He never left the comfort of the front door and felt sure I'd come for him sooner or later.

About four years ago, I began this nifty trick of feeding him snacks...one at a time in the kitchen. Sadly....a week later.....he made it permanent and sits there in the kitchen each morning to get twenty-odd cat snacks.

In the past week...the Vet has come up and finally hinted of an impending kidney situation. The best you can figure.....this fifteen-year old cat probably has six months to go....maybe eight.....and he'll progress to cat-heaven.

There are several things gleaned from the Micky-period. First, Persians are terrible at sticking to you. If you walk from room to room....they tend to walk with you. Second, Persians like the sun.....and will actually work to get sun burned if you give them a chance. Third, Persians need a trim or cut about every three months. If you wanted the poodle of cats....this is it.

The Mighty Micky has probably had a five-star deal. In the past year....over $1,200 has been thrown at Vet bills for him. He got the best food....the blanket to sit on....and if he threw up on the couch....you just overlooked it. He will likely be missed for more reasons than you can imagine.
at Friday, February 26, 2010 No comments: