The Art of DC

As you walk around DC, you can't help but admire the statues and "art" left out in the public view. The issue is....after a while...you start to question what is art and what is not. 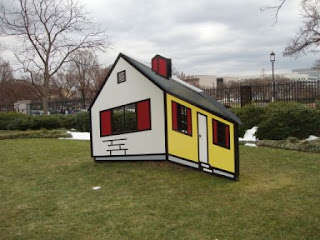 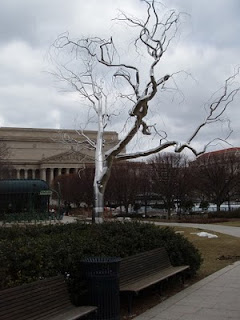 I stood there looking at these two pieces. One was a steel tree of sorts and the other was some carpenter effort at illusion. Some dude got paid a fair amount of money for each. And I would likely question the value of both.

The Fall of Man 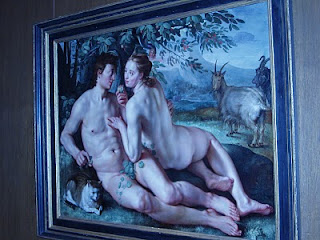 I spent the morning over in DC....at the National Art Gallery. For a guy from Bama.....I kinda hate to admit that I have an interest in art. It might be taken the wrong way.

So I spent two hours walking around.....gazing at magnificent scenes and the imagination of very creative men.

Then I came to this piece....."The Fall of Man". I stood there for about five minutes....admiring the scene and the ideals behind it.

For a guy from Bama.....my vision is this handsome guy named Larry....sitting in a pasture.....tending to his goats. Somewhere in the heat of the day (it was fairly warm because Larry got to the point of removing his clothing)....Larry's gal Wanda came over to the field. It felt rather hot for her too.

You would refer to Wanda as a wholesome gal....amply built.....and probably capable of hauling a bushel of corn easily.

Things go well in the field for Larry and Wanda....with the mountains in the background....and they reach a point of happiness. The title of the painting...."The Fall of Man"....leads you to think that Larry's great weakness in life for Wanda.....was the downfall.

I, however, sat there and viewed the entire painting. It hit me at some key moment, that I was missing one last element of this painting in my mind....this damn Persian cat in the lower left corner.

The artist spent a heck of a lot of time putting that cat on the canvas. He didn't just toss the Persian on the picture....he spent lots of time making sure that every inch of the cat was accurate and fit well.

It hit me.....the Fall of Man....refers not to Wanda, but the Persian cat. Yes, that vicious cat....which demands attention day after day. Once the Persian enters your life....it's downhill from that point on.

So that was my analysis of the Fall of Man. I realize some of you may have better art values than me. You have to realize that being from Bama.....limited my artistic background...and set me back thirty years, so I do have some catching up to do. And yes, I might envision what was in the picture a bit differently.

The neat thing here....is that I barely saw half of the National Art Gallery.....so I've got tons of more painting to see and touch.

What Marlin Taught Us

I sat and pondered over this Sea World episode of the past week...where the trainer gal got dragged down by the whale and eventually died.

If you flip through MSNBC, CBS, ABC, CNN, NBC, and Fox....you had hours and hours of coverage over the whale, the trainer, the park, the profits, the what-if's, the comments of park attendees, the analysis of animal trainers (some were just lion trainers but for some reason, they were experts in whales too), and just comments from regular people off the street (I suspected half had never seen a whale, if you asked me).

It was not that long ago that Siegfried and Roy act had their tiger episode....where some lady in a funky hairstyle in the front row attracted the tiger's attention....and things went wrong. In this case....this trainer gal in Florida had a long pig-tail....and I'm guessing that flipped out the whale in some fashion or he thought it was a fish.

Frankly, when you start messing around with any animal....you get a wide-open score card. You could bring up a dozen elephants to Bama and spend ten years training them to play soccer.....to have folks stop by your farm and pay $5 to watch elephants play soccer. Then one day....your best goalie....Larry the Elephant....gets just a little upset and stomps on Wanda (your wife who plays the ref in the game).....you just can't blame Larry.

It is a funny tendency that we have....that animals can be purely safe and our "buddy".

We all sit and watch Animal Planet....and feel that Lions can be made "safe". We've watch clips of how some guy taught a 500-pound guerrilla to eat peanut butter from the kitchen table. We've watched shows where a huge horse was personally trained by a 5-year old kid.

The truth is that you could have a 500-pound guerrilla around the house for ten years....doing your laundry....clearing the table....and even sitting with you in the evening while the two of you watched Dancing with the Stars and feel perfectly safe. Then one day.....an ant appears on the kitchen table....and Kong suddenly grabs ahold of you and starts whoomping the heck out of your head. You can't predict that moment or why it sets off your "buddy".

So in the end....we go back to Marlin Perkins and Mutual of Omaha's Wild Kingdom.....where animals are animals....and you'd best keep your distance and just let Jim get the life whoomped out him by the guerrilla. That was Jim's job and Marlin paid him to take the punishment while Marlin sat forty feet back with the camera. Marlin wasn't crazy....he knew what could happen with wild animals....even if they pretended to be friendly.

We had an unusual episode unfold here in the local area about two weeks ago, and yesterday...most of the story finally came together.

There is this El Salvadorian guy...Elmer Zelaya...who is forty-one years old (this is key to remembering).

Elmer was living here in the DC area...just across into Maryland...up until second week of Feburary. Elmer's visa was running out by late March.

Elmer had been staying with relatives and had made some money while working in the DC area.

During the time living up in the DC area...Elmer had become friends with a young lady. Well...we must be honest...the young lady was eleven years old.

Discussions between Elmer and the young lady (eleven) got pretty serious in the past month or two....and they decided to pack up and move to El Salvador. Elmer let her know that judges in El Salvador would marry them up with no issues. So off they drove.

Naturally, the family got all upset...the cops got involved, and the chase was on.

Somewhere...in the midst of Tennessee...a Tennessee State Trooper pulls over this pick-up driven by Elmer. The first story was that the young lady in the truck was his daughter. The cop looked at the picture from a bulletin and arrested Elmer on the spot.

From what cops can figure....Elmer had been fairly close contact with his young lady for the entire past year.

The cops were curious about intentions here...and the young lady said that the two had talked at length about “what they wanted to do when they grew up and about how they loved each other.”

I'm guessing the cops will find enough charges to hold Elmer for at least six years in prison. The thing is...when Elmer finally gets out...I'm wagering his young lady will finally be eighteen and standing there at the gate waiting for him.

It is a sad tragic tale in one sense....which shouldn't have happen. But you have to stand there and ask yourself how some forty-one year old guy gets into the mindset of having a relationship with a eleven-year old girl and even discusses marriage?

Other than one suspicious cop in Tennessee...the two would have crossed the border and been in El Salvador two days later, and probably married on the third day.
at Sunday, February 28, 2010 No comments: