Imagine yourself standing there and a buddy comes up to suggest this investment opportunity. There's this B-class movie...the type you'd think of for drive-in theaters....called Macon County Line coming out. There's a futures exchange where you can invest (it's really a bet, but investment folks call this a futures investment deal).
So you put down a $1k and discover six months later after it comes out that it's pretty popular....in fact, it's making tons of money. Your $1k....is now $2.5k. You more than doubled your money.
Well....some folks are working on a movie futures exchange. So far, not a single trade has occurred. Some senators and congressmen are seriously against it because they think it's corruption and greed written all over it. The other problem is that the studios tend to hide the success or failure of a movie....which makes a true box-office receipt questionable.
But onward we go with the development of this idea.
You have to admit....three or four times a year.....a movie comes out and it's really bigger than anyone thought it would be. Macon County Line was one of those movies that made a ton of money in 1974/1975. No one would have guessed that. Drive-in's were carrying it week after week....and people came back to watch it several times over the summer.
I have skepticism over the entire futures market. Doesn't matter if we are talking hogs, cotton, grapes, or peanuts. Anything can occur....and suddenly your $5k is worth $10k, or it's worth $2k. You tend to win big or lose big. That's not the kind of deal that you'd invest on.
So there's likely a couple of guys out there thinking of a neat movie title....."Flames over Boloxi", which involves a wrestler, a female nuclear physicist who strips on the side, a midget named Karl who write love poems, a retired NASCAR racer turned minister, and a Icelandic domineering gal named Val who continually winks at everyone (it's a physical disorder, not a love attraction). It's a guaranteed winner, and I'd have to lay down $3k on the movie futures market with this script.
at Monday, April 19, 2010 No comments:

A Murder Upon a Murder

We had a murder here in the DC back in 2002....at a nice brick home. A child and her father were killed. The murderer was found....and sent off to prison. The home was being robbed, and things unfolded in a very sad and tragic way.
Around a year later....the home was put up for sale. And this up and coming school administrator bought it. Apparently, he was never told about the murder as the house sold, and then later learned about it. He didn't make a big deal out of the situation.....at least at the time.
Two days ago....the school administrator....considered one of the most elite of the DC administrators....was found dead in the house. Murdered. Some items were stolen, and his vehicle was missing apparently. The SUV was found this morning....around fifteen miles away....in the far east tip of DC. No clues so far from it.
Cops are sitting there and shaking their heads. Nothing makes sense.
I read through the story.....it sounds like another hit-and-run robbery....and the administrator walked into the wrong room at the wrong time.
There's this issue of buying a house where a murder occurred. It's different from where a family member just passed away or had a heart attack.
When I lived in Germany....over in the next village....there was a violent murder where a guy killed his wife and child, then killed himself. The house was one of those $500k houses in the local area and prime real estate. When the property finally transferred over to the bank (the guy still owed money)....the bank found zero interest in the house. It took around four years for them to finally dispose of the house and nothing was said over the price but I suspect they lost half the value of the house.
I don't think I could buy a house like that. There's some uneasy feeling when a violent crime occurred in the house. It's the same feeling you have on a Civil War battlefield.
at Monday, April 19, 2010 No comments:

Back to Dunkirk, Yet Again 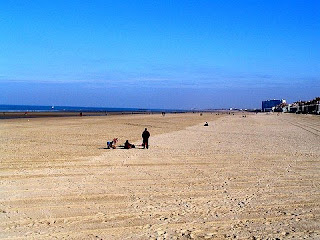 In 1940, they came....by the thousands.
As British men of war sat on the beaches of Dunkirk, France....with their backs to the sea and the Nazsis in front of them.....things were dire.
So the British government, with the help of thousands of private boat owners....came to pull their countrymen off the beach and return them to the safety of the British Isles.
Today, with the volcano mess in fifth gear and airlines at a virtual shutdown....there are thousands of Brits stuck in France and Europe....trying to make it back home.
Yesterday, the idea came forward by some private British boat owners to rescue them. The French government crossed this off....I think more in line with the enormous task involved.
Today, the British government has spoken and said that it would start the process of running the "rescue" itself. This time....I don't think the French will deny them.

Security Minister Lord West also spoke up and indicated that commercial vesselss and amphibious landing craft could also be brought into this dramatic 'rescue'.
There is some feeling tonight that air travel will relaunch tomorrow....at fifty percent of the normal level. Although alot depends on the volcano and its effect.
You have to sit there and grin a bit over this 'rescue'. No one a month ago would have dare speculated about air travel being brought to a standstill. If the US tried to have its nuclear summit this week....almost no European leader would have attended unless they went by vessel.
What happens if this volcano continues on for a month or two? The vacation and air travel industry would come to a standstill....with bankruptcy likely to follow. A halt by the volcano in three months wouldn't matter....it'd already be too late. The world is not accustomed to such a delay.
So tonight.....people around Dunkirk are likely sitting there and contemplating what may happen on their shores tomorrow or Tuesday. A mighty 'rescue' force may arrive to bring the 'boys' home....once again.