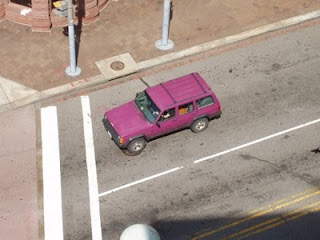 In DC, you often notice weird stuff. Yesterday, I stood there and noted this purple Jeep Cherokee. I kinda felt sorry for the guy. It's not one of the twenty colors that Jeep offers....so he must have paid some local paint shop to bring him to this shame.
at Sunday, May 02, 2010 No comments: 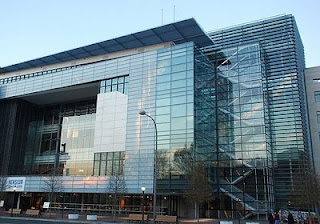 I spent two and a half hours at the News Museum yesterday.
Some observations.
If you have only two days in DC....skip it. If you have three days in DC...skip it. If you have an entire week....ok.
Be forewarned....it's roughly $19 to get into this place, and you really scratch your head to figure out why so much.
Half the building is museum....the other half is high-priced condo's for rich news media folks. I don't why they'd want to hang out....but it's probably like basketball players who want to chat on sports and drink beer all the time. Don't worry.....you won't see these guys because they have a private entrance. And no, I don't think Katie Couric lives there.
For a place this size, they have around sixty employees on duty. I stood there mostly laughing at the large extent of escorts and such. There must be alot of out-of-work news folks and this is a temp job for them.
As you enter....they desperately want you to stand there and wait for a group escort. I kept thinking what the heck is the escort for. I walked on my own, then hung out for ten minutes with one group. The escort acted like they were an expert on news.....kinda like those four guys who appear on the Sunday chat shows.....who are just about as smart as you and me. Well...almost.
They go into a big detail about newspapers dying out....such a terrible thing. But they rarely ask why folks dumped their local subscriptions. They try hard to believe that Craig's List stole want-ad's and thats the only reason for bad business.
Up on the top floor is a great view of Penn Ave and the Capital....which is worth $5.
Down on the third floor is the VIP lounge. This is only for VIP journalists. I stood there watching this group mingling and sipping cheap champaign and eating some kind of upscale biscuits. You can see them....through eight-ft tall windows. Kinda like being at a zoo. They want to be noticed, but they don't want you around their function. Journalists.....they are a bit different.
So, yeah, it is a waste of sorts. It's over-priced. There's a great newspaper exhibit up on the fifth floor area....maybe worth seeing. The Berlin Wall pieces in the basement? Well....I didn't say nothing to the lady guarding it....but these chunks of concrete all had asbestos in them....so you probably wouldn't want to run your hand over them or breathe too closely.
Afterwards? If you head up the side street for a block, there's a nifty coffee shop with 2-star pastries. It's ok for a Mountain Dew and you can sit there on the outdoor cafe area, and chill off.
at Sunday, May 02, 2010 No comments:

A Herd of Segways 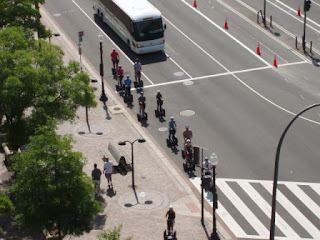 Sometimes....at the right moment in DC....you will be standing there, and a herd of Segways will run up on you.
I was at the News Museum yesterday and spotted this herd.
I'm kinda amazed that no ever gets run over by a bus or crazy driver in DC.
I don't know what these guys are paying....I'm guessing around $100 for a half-day of driving around the city. Maybe it's worth it. Maybe not.
at Sunday, May 02, 2010 No comments: 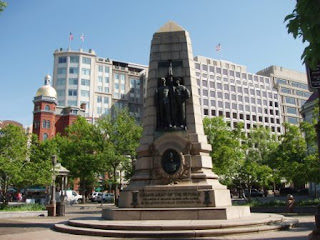 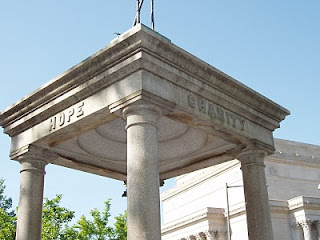 Somewhere, down along Pennsylvania Avenue, there is this statue sitting, Faith, Hope, Charity (and Temperance).
It stands behind the Republic statue....if you were kinda looking for it. Look for a smaller statue with a funny fish in the middle.
Course, I do watch Glenn Beck a fair bit, and this funny statue suddenly stood out yesterday whilst I was in the DC area. I walked around the statue for a good five minutes.
Glenn never mentioned the temperance bit....but this is from the late 1800s period....when temperance was a big deal.
This 'fatith, hope, and charity' discussion....has been around for a number of years.
Just a curious thing that you'd normally never notice. There are 10,000 statues in DC....and most folks probably only see around 200 of them.
at Sunday, May 02, 2010 No comments: