The Shoe On the Other Foot

I go out on FreeRepublic a couple of times per week. There was this comment, which I will attribute to JimHr

Pause and ponder over his 'letter'.
Dear President Obama:

I’m planning to move my family and extended family into Mexico for my health, and I would like to ask you to assist me.

We’re planning to simply walk across the border from the U.S. Into Mexico, and we’ll need your help to make a few arrangements.

We plan to skip all the legal stuff like visas, passports, immigration quotas and laws.

I’m sure they handle those things the same way you do here. So, would you mind telling your buddy, President Calderon, that I’m on my way over?

Please let him know that I will be expecting the following:

2. English-speaking government bureaucrats for all services I might need, whether I use them or not.

4. I want my grandkids to be taught Spanish by English-speaking (bi-lingual) teachers.

5. Tell their schools they need to include classes on American culture and history.

6. I want my grandkids to see the American flag on one of the flag poles at their school.

7. Please plan to feed my grandkids at school for both breakfast and lunch.

8. I will need a local Mexican driver’s license so I can get easy access to government services.

9. I do plan to get a car and drive in Mexico, but, I don’t plan to purchase car insurance, and I probably won’t make any special effort to learn local traffic laws.

10. In case one of the Mexican police officers does not get the memo from their president to leave me alone, please be sure that every patrol car has at least one English-speaking officer.

11. I plan to fly the U.S. Flag from my house top, put U S. Flag decals on my car, and have a gigantic celebration on July 4th. I do not want any complaints or negative comments from the locals.

12. I would also like to have a nice job without paying any taxes, or have any labor or tax laws enforced on any business I may start.

13. Please have the president tell all the Mexican people to be extremely nice and never say critical things about me or my family, or about the strain we might place on their economy.

18. Oh yes, I almost forgot, please enroll me free into the Mexican Social Security program so that I’ll get a monthly income in retirement.
After you read this twice....you start to laugh and realize what people are getting upset about.....and how it measures out to be nothing. And if any public news service were to ever read this over the air....it'd create a mess of reality.
at Saturday, May 08, 2010 No comments:

Only an observation....over the massive drop this week in the stock market. They still haven't figured out why....which makes you wonder about things.
My belief? There's a simple tool for folks to use in stock sales....called a 'trigger'. You create a rule over your $20k of stock in Wal-Mart. You bought it at $25 a year ago, and today it's around $27.50. So you make this trigger rule....sell if the price drops below $26. So you still walk away with a profit. It's automatic when the trigger rule occurs. No stops....the company just sells immediately.
So imagine a million little investors out there....all owning two to twenty stocks....and they all have triggers in effect. Some folks own $15k worth of stock....some own $100k of stock.
So on one day....just a regular bad day and it was just because of some big guys who dumped big stock, and it would have been a regular 200-point loss on that day....and suddenly, the triggers get pushed. Suddenly....200-points turns into 600-points. Everyone is selling but they don't even realize it until that night.
I own eight stocks. Back in January....I had four triggers turned on. In the past month....I turned them off. Just stupidity or just trust in the system....but when this occurred....I took the loss like everyone else.
Should I have used the trigger apparatus? Yes....without much doubt. But you have to think stocks constantly....on a daily basis.....to make this work. You need to review where the stock is going and what the sell point is....which is always changing.
So in my mind....this big 'blast'....came from triggers....and nothing much else. And I'd strongly recommend triggers for anyone in the investing game. Even I've learned my lesson.
at Saturday, May 08, 2010 No comments:


I've watched this new Arizona clip about five times. It is professional, cheap, and quickly gets to the point. The state of Arizona is basically becoming the warfront for the entire campaign of the Democrats for 2010. I feel stupid for suggesting this...but it's apparent that they are begging for a fight.
This is just one clip. What if the governor of Arizona has another dozen sitting there....and really to release? What can the Democrats really say in their counter attack?
There's only three real topics for this entire campaign now....jobs, the economy, and immigration reform. For a Democrat...it's hard to say anything positive over immigration reform in the majority of states. So it's a anchor that is holding the party down in gains.
And Arizona? Well....they are actually focused on one mission....tie themselves to the administration and make them stick to a topic that is a loser in the majority of states. Whoever plans out the future of the Democratic party.....misjudged things....and this will be a long hot summer.

In my entire life...I've been around a total of three bomb threats.
The first one was in the last year of high school in Bama. Shortly after lunch....I was in a class, and they gave the announcement for the whole school to evacuate. We gathered at the football field.
This was in March....and still fairly chilly. The gym guys were sent out....without jackets....and mostly freezing in the 45 degree temperatures. At some point....twenty minutes into this wait....our genius of fiddle and in the gym group....Gary Macky....finally said enough and ran full speed into the gym to get his jacket. We cheered him on....as he ran like a mad man toward the gym. The teachers were obviously upset. Heck, Gary could have been blown up.
About forty minutes into this....the school decides to send everyone home....and hustled up the buses in fifteen minutes.
It was an odd thing. Here were the buses. And here was the boyfriend of a gal in the 11th grade....patiently waiting for her in his car. There weren't any cellphones in those days and no way that she could have called him to pick her up. So obviously, in the weeks after that....some of us put one and one together about this guy.
The second bomb threat happened about ten years ago at Ramstein. Some idiot called into the dental clinic...which was next to our building. They ran us out in a matter of minutes and we sat around for three hours while they examined every inch of the dental clinic. We sipped coffee, discussed stock options, and chatted over German beer.
The last bomb threat was about seven years ago at Ramstein. Some idiot left a briefcase next to his car in the BX parking lot. The cops chased us out of the building again....and we spent another three hours sipping coffee and telling war stories.
You can't ever take these bomb threats as a joke. Sooner or later....you will actually have a real bomb and then things go really bad. So you have to play along and just be patient.
at Saturday, May 08, 2010 No comments: 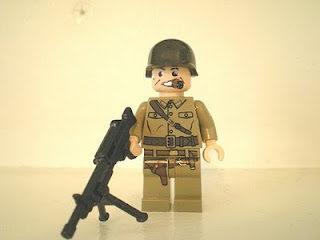 It's a proposal right now....and only for guys in Afghanistan and Iraq. The deal is you have to try to avoid deadly force...have some risk put on you....live to tell your story....and then have some Captain write you up.

It's a idea from some British general...in case you were wondering who'd dream up such a medal.

They want to encourage folks not to shoot or offer up deadly force.

You can imagine Sarge standing there at a ceremony. His captain wrote up this thirty line text and the general signed it. So back in the states....in front of three hundred folks....Sarge is about to be awarded the 'courageous restraint' medal.

They read through it, and then Sarge turns to accept the medal. They offer Sarge a chance to say something.

Sarge stands there for a moment....and then says...slightly grinning..."Yes, I did pause. I did lay there against the rocks as hundreds of rounds came down on my position. I quietly sat and never rendered a single round back. Heck, we must have laid there and paused a good twenty minutes while they blasted us. Then the mighty pair of F-16s swung down from the clouds and dropped six bombs on Jihad Joe and his buddies. The shooting stopped then. Jihad Joe and his friends were all dead. We stood up....dusted ourselves off....sipped some lemonade....and the pilot radioed in to thank us for our courageous restraint and giving him a chance to blast the bastards."

Sarge would sit down then, and the General would ask Captain Snuffy if there were any more courageous restraint award folks to tell their remarkable story.
at Saturday, May 08, 2010 No comments: