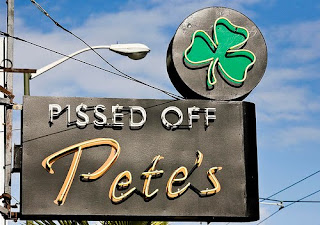 Pissitivity.
It was a unusual story in the Washington Examiner yesterday.
The City of DC now has to pay this doctor.....$450k. It's for an episode that he had with a DC city cop in an accident.
The basic story? The doc was driving his Porsche in DC in 2004....and got rear-ended by a off-duty Detective. The cause has never been established over who caused the accident...which is kinda funny because normally it takes seven days for the cops to determine something like this (unless a cop is involved, I guess).
After the crash, the doc and the Detective had a hostile discussion. The Dectective started using lots of profanity in her language, and I guess the doc and bystanders labeled this as "pissitivity". As far as I know...pissitivity is not a real word (Microsoft agrees as well).
The Detective started making high priority calls to the cop station....and suddenly the cops arrive to arrest the doc.
An interesting thing happens now....the Doc is charged with reckless driving, taken to jail, and held for fourteen hours in the DC jail before being able to get bonded out.
The Detective won't talk now....to anyone.
The city? Well.....this went into the court system and they decided that the cops who arrested the doc....did the wrong thing. And then holding him for fourteen hours.....was wrong. And this adds up to $450k.
Go figure....the lawyer is getting $100k of this, and the gov't will claim $125k. So the guy will get around half of this check.
I sat and pondered over this. Being falsely arrested and to spend fourteen hours in a DC jail.....and then get $250k for your 'reward'? Yeah, I'd do it and be fairly happy.
Now we come back to pissitivity. Having grown up in Bama....it's hard to find anybody who'd you tag with pissitivity. In the last five years....I've probably come up against six folks in the pissitivity category....four of them women of course. Not to say that women are more pissitivity-prone.....I sure don't want to get any lady friends in a pissitivity state of mind.
Are there sensitivity-pissitivity classes for folks? I'm guessing there might be. Could you overcome your pissitivity issues? Yes, I'd think so.
Are there places where you might be well suited to drink and handle your pissitivity? Yeah, there's probably a couple of bars made for you. Should you admit your problem to your boyfriend or wife? Well.....no. It's best not to admit this. Just my advice.
As for traveling through DC and the chances of being wrongly arrested. Smile and record the whole event....and then get a lawyer. And don't worry.....we will never fire a cop on the DC force who has pissitivity issues.
at Tuesday, May 25, 2010 No comments:

Email ThisBlogThis!Share to TwitterShare to FacebookShare to Pinterest
Labels: pissitivity 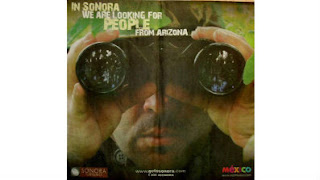 It's an interesting ad. It appeared in the Arizona Republic Newspaper, and meant to be a positive tourist ad to get Arizona folks to visit Mexico.
The Sheriff up in Phoenix has decided it is very unfriendly. So he's asking for an apology.
The Mexican tourist folks claim they honesty mean for it to be friendly and it should not be seen any other way.
I pondered over it for two minutes....the hat in green....no real tourist indicator shown....and I've decided that it wasn't meant as a friendly deal. If the Mexican tourist folks think that....they are pretty much lying.
So, should you cross the border and play the friendly gringo character? No....I don't think its in your best interest anymore. Better set your sights on a different and safer place.
at Tuesday, May 25, 2010 No comments: 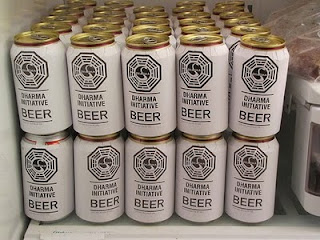 Last night, from 7PM until almost 11:30PM....I watched Lost, the final episode.
Frankly, I had expectations.
In the end...the 150 minutes they used to tell the final bit of the story (after the 120 minutes to pat themselves on the back).....I came to realize that it was really a 20-minute ending and left out about forty answers that I'd been waiting for.
In fact, there was the two-segment ending....with one group on the island and somehow finding a way to exit while Jack, Ben, Hurley and Desmond saved mankind. Then the other segment was this side-ways ending....with a confusing "you-gotta-die" taste to it.
If I'd had a case of Dharma beer....I would have sipped the entire case at the end....that's how lousy the story ended up.
For six years....I ran along with the story and had a big interest in the characters and the story. I liked Hurley. I was fascinated with Kate. I thought Ben should have been killed a thousand times over. I never understood the necessity of the polar bear. And I never got the real grasp of the side-ways story.
So it's ended. I won't pull out my collection of DVDs and survey the series again for several years. It'll take me a while....and maybe eventually....I'll just sip some Dharma beer and get over it. Maybe.
Oh, and if you didn't notice, there were at least eighteen car commercials during the 150 minute show. And no, there were no Preparation H commercials....if you didn't notice.