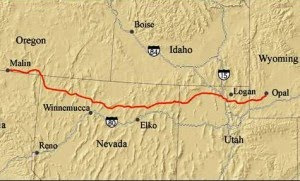 Once in a while, you find a stupid but true story.
There is this natural gas company....El Paso Corp....that is 'pure evil'. The boys from El Paso Corp wanted to build this natural gas pipeline from Wyoming to Oregon. It was deemed a terrible environmental threat. Never mind the fact that it didn't cross any interstates and was going across some of the most unlivable territory in America.
Two groups of environmentalists stood up and accused El Paso Corp of serious environmental issues. The list of potential damage ran on and on and on. The two groups? Western Watersheds Projects and Oregon Natural Desert Association. They just couldn't let the boys from El Paso Corp get away with this.
So weeks led into months....and El Paso Corp finally realized the solution. Pay the guys off.
So over the weekend....quietly....El Paso Corp agreed to a twenty million dollar payoff to these two environmental groups. They both shut up quickly and quietly about environmental damage potential. Shake-down? Yeah....without any doubt. Neither environmental group was really serious....they just wanted cash. Since they are charity-related groups....there's virtually no cash involved.
In a way, you have to laugh about the outcome.
I'm guessing the money will be split 50-50 on this deal. But it's the use of the money that becomes amusing. The money can only be used for two purposes (from the agreement). Sagebrush habitat and buying grazing permits from ranchers.
Naturally, you'd scratch your head over this. The sagebrush habitat? Well....I'm guessing they have a couple of PhD guys that they'd like to help fund because the boys in sagebrush study....really don't get much research money. So they will hire up a couple of folks, and probably bring some 'interns' into Oregon to develop sagebrush. We can never have enough sagebrush....if you ask me.
As for the grazing permits. If you target one county....I'm guessing the money would last five years and pump up the permit cost in the counties around that county....making ranching life and cattle grazing an expensive lifestyle. This way....only the Hollywood crowd would be able to afford a loser of a ranch.
A hustle? Yes, without doubt. Both groups learned the trade well and were prepared to stall the natural gas pipeline for months and years. For the El Paso Corp folks....twenty million was worth the effort.....it would have gone to lawyers to fight the environmentalists anyway.
Note: map from BLM files.
at Tuesday, July 27, 2010 No comments:

WikiLeaks and the Shoe That Fell

The full WikiLeaks story came out today....tens of thousands of classified documents. By the end of the day....folks simmered down for a while and then examined everything....then came to this amazing moment....it's all secret or below information. No Top Secret information.
I sat there smiling when I read that. The Top Secret mafia had this funny rule for a number of years. No active USB outlets on a computer and no ability to burn to a CD. They had that for a reason. So this Private Snuffy character who wanted to make a big deal....was limited to what damage he could do.
What happens now? Well, the Top Secret mafia are going to likely suggest that they know the right method for the direction ahead. Their method will likely start to be embraced.....as much as folks hate the idea.....and this vast computer network of secret computers will be changed. The miserability index is going to the max. A whole bunch of guys are going to remember Private Snuffy for a long time.
at Tuesday, July 27, 2010 No comments: