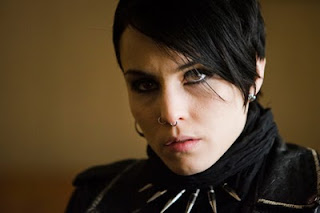 Stieg Larsson isn't exactly a household name. In fact, if you found more than twenty folks in the state of Bama of who actually know Steig's accomplishments...it'd be an amazing thing.
Steig was this Swedish guy who got into science fiction back in the 1970s. Born in 1954, he was this guy who simply had a writing ability and kinda drifted toward science fiction.
By the end of the 70's, Steig was probably the most known Swedish science fiction writer in existence. Considering there were probably only twenty thousand hardcore enthusiasts in the country....this was something to build onto.
At some point, Steig got into radical groups....especially in analyzing and knowing the make-up of radical right and extreme racist groups. You could say that Steig eventually became the absolute expert on these groups.
Somewhere, along the last couple of years of his life and before dying of a heart attack in 2004....Steig got around to writing three murder mysteries. To be kinda honest....it was more for pleasure than anything else that he wrote these three. To be even more honest....Steig had absolutely no desire in ever selling the three books. So they became this ongoing effort of a manuscript.....which sat there until he died.
These three books then were taken, and put out for publishing. An amusing thing happened. These became 5-star wonders in terms of literature. They sold millions across Europe, the US and the rest of the world.
Steig never saw any of the profit or the appreciation from the three books.
This week, it was finally announced that a US production company will make The Girl with the Dragon Tatto. The Swedish version has been out for three years now. I recently saw it here in Arlington....in Swedish, with English sub-titles.
The Girl with the Dragon Tatto is a bit of a unusual movie. In fact, I have great doubts that any US production can outdo the Swedish version.
To introduce you to this story....it's a simple lost girl notion. Family meeting, teenage girl goes missing, uncle's favorite niece, and she's been missing for twenty years. The uncle wants to end this mystery, and needs a 60-Minutes type journalist to crack the case. The journalist is in serious trouble and about to be sent off for six months of prison. So the uncle wants to know if the journalist is capable of doing the job, and hires a detective company with one employee to establish the hiring requirements.
This is where the character Lisbeth Salander steps in, played by this Swedish Goddess Noomi Repace. Lisbeth is this weird geeky gal who'd likely chase any Bama guy away with just a simple stare. She has tattos and various things that we'd best not describe. She's capable of just about anything....and you sit and wonder if there is any limit to her personality.
I won't go into great detail about the movie....but it's safe to say that there are various murders to unfold and this journalist has only Lisbeth to carry the weight of the entire movie.
After watching the Swedish version....I'd say it's a pretty harsh movie for Bama folks to view, and there's a scene or two that you'd probably rather just skip or check out the theater bathroom when it comes up. Don't worry....you're know when to step out.
It's hard for me to imagine any American crew besting the Swedish crew, and I consider Noomi Repace to be a Goddess for just about every single Bama guy to fantasize about but never have.
And sitting there somewhere in heaven is Steig, who is likely smiling that so many folks find Lisbeth such an enchanting woman, and she was likely Steig's dream Goddess.
at Monday, August 16, 2010 No comments:

While it's not mentioned much in the big press....CBS has this thing that they are exploring. They'd like to just pay Katie Couric off in some fashion and let her go early. The time schedule that keeps getting mentioned is after the November elections. The funny thing is that they kept hinting that back in 2008....and it never happened.
The problem for CBS News is that it's locked in a unprofitable situation and Katie's salary is draining resources. It's Katie, the production crew, and then a number of guys around the world on a tight budget. Unlike the days of Dan....when they had six to ten big-name reporters and could spend time telling a story....it's mostly Katie telling a story back in the studio because they can't get big-name help.
Why didn't the 2008 episode occur where she was to be paid off and sent to 60 Minutes? Well....they kept looking at the salary and hiring someone at that rate....to only do 60 Minutes didn't make sense. I'm guessing they tried to get her into a new deal, and she just smiled and said no.
So if this finally happens at the end of this year....then what? Some folks hinted that NBC would welcome her back. I was thinking it'd be neat to have her and Matt together....maybe with baseball bats....on the Today Show. I'm pretty sure that won't happen though.
A evening NBC 60 Minutes-type show? Well.....I doubt that they could sustain the audience and the salary that she'd want. If CBS couldn't sustain their team....NBC won't do much better.
This past week.....there was a couple of suggestions that CNN might be interested. But it's hard to see them getting into a relationship because they are spiraling on profits currently, and just want good cheap help.
It's too bad that President doesn't need a new press spokesman.
So I'm guessing that Katie will refuse the CBS deal to take the lesser money to leave early. She'll hold onto the deal until the full contract runs out. Just my humble opinion.
at Monday, August 16, 2010 No comments: