The Fix For the Mosque

I pondered over this New York City mosque episode. The Democrats and Republicans are still blasting away, and more city residents are going negative over the whole mess each day.
I have come to realize the perfect answer. They want to build this huge twelve-odd story building for a mosque. They admit there's no plan yet. They admit they have no money. They admit alot of stuff that would lead you to wonder why these guys are still so serious about making this happen.
So why does it have to be twelve stories? I'm thinking to let them build it and limit them to two mere stories, period. You can cut this requirement for $100 million back and you just need a mere $15 million to probably buy the property and put up a simple two-story building.
The fact that no plan exists and they really don't know how to use the square footage makes this mostly a joke anyway.
And at the end of the day.....a mere two-story building isn't much to look at and I think most New Yorkers would never even notice the building. I'm guessing the Islam guys have another agenda here and need this extra tall building for some secret purpose, and they will decline my idea anyway.
at Saturday, August 21, 2010 No comments:

This week, we had this funny meeting up here in the Maryland area with the utilities commission and PEPCO....the local electrical company.
Since January, PEPCO has had this ongoing mess with emergency outages. During the winter period, there two or three snow storms and this serious problem with power out a week in some cases.
Then as June, July and August roared along....these massive wind storms came up and triggered more outages. There was a pizza delivery service that admitted that they were out for six days, and the guys working there....made nothing for that period....so they were curious how'd they might pay for rent or such.
So folks around this region of Maryland who get PEPCO power, are plain upset. Some folks are looking at fifteen days of lost power for the year so far, and they are thinking about the yearly average of one day.
So the fury came left and right. Frankly, the commission is very upset.
But there's this other side of the situation. You see, up in Maryland, there are county and town rules about cutting back on trees. Its generally a topic that gets you into trouble if you suggest a dozen trees on some street need to be cut down. The owners will complain. The political leadership will complain. And in the end....most trees are never trimmed until storms rumble through.
If you see a problem brewing here, you might be right.
PEPCO sat and took all this negative talk but quietly, you could sense that there's this major problem of overgrowth. More outages? Yeah, I'm already betting on it.
Luckily, I live in Arlington and the city gets all strict on trimming the trees along streets. We don't have outages much (a grand total of eight hours since the day I arrived).
at Saturday, August 21, 2010 No comments: 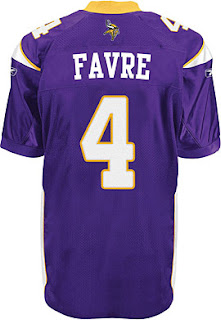 Brett Favre agreed to come back for yet another season, for the Vikings.
For about fifty percent of the NFL viewers in America, there's a bit of disgust. They'd like to see Brett retired and finished. For Green Bay Packer fans, ninety percent of them would like to see Brett retired and finished. Then there's this small group of Packer folks who basically aren't Packer fans...they are Brett Favre fans, but they won't admit it in public.
For the Vikings, it's a business deal made in heaven. They get all the regular business and then they get these secret Packer fans who just go on the thrill of watching Brett Favre one more season.
So you've got this John Steinbeck-like script sitting there.

It was cold. Colder than Butte in a blizzard. The stands sat full and every eye was set upon the field. Some folks had traveled from Rockland and DePere to be there and witness the tireless effort of Mr Farve.
The beer almost froze as it hit your lips. There wasn't a logic to being there in such harsh conditions except you wanted to see the impossible. You had this vision of the Vikings pushed back to their one-yard line, with ninety-nine yards to go. You wanted to Brett gage the situation and then whisper a line toward the heavens.
In a blink of a eye, things changed. Brett stood back and tossed a 20-yard pass, and you felt this lump in your throat. Whatever had been done and lost in Green Bay....was alive again in a Vikings uniform.
Then Brett stood ready for the next advance, and another twenty-yard pass. There was a tear forming on your eye but it was mostly half-frozen, and you were trying to rub it off so you could see clearly.
Then Brett stood ready for another advance, and tossed a long thirty-yard pass. Seconds remained now in the game. You felt like God had sent Brett to the Vikings for a reason....to give them what the Packers were forbidden from having. You swigged down another gulp of your beer and munched on your home-made cheese that Grandma had made.
Finally, with just eight seconds left....you sat and watched Brett toss the final long one. This lump appeared in your throat and you felt this heavenly-sent air of warmth around you. The pass was taken and in a split second, the Vikings scored. It was a precious moment. The Packers could have had it, but it wasn't meant for them. And so the Vikings were blessed.

Steinbeck could have written the moment, but the truth is that ten thousand folks are now obsessed over Favre being back. And that's enough to make a difference in the camp of the Minnesota Vikings.
at Saturday, August 21, 2010 No comments: