Over in Greece...in a more remote area...some animal rights activists have spoken up and said they were the folks who released more than 50,000 minks loose from two farms. Total damage for the two farms? Over $1 million.

It's a curious thing. So you open up the front doors of the barns and let loose all these little minks. They run off to the woods. None of them have ever survived in the wild. It's September and weather is shifting around.
You've basically invited half of the minks to die out via starvation or by the winter. A couple of kids with 22 rifles could probably take down forty of these little fellows per day.
So the environmentalists pat themselves on the back....but after they walk around in the spring and pick up 5,000 dead minks....do you get a reward? I'm just curious.
The amusing thing is that Greece is in serious trouble and any business deals would have been 'golden' for them right now. So the million that would have been spent around the country won't be spent. So a lot of folks got screwed on this deal.
at Thursday, September 02, 2010 No comments: 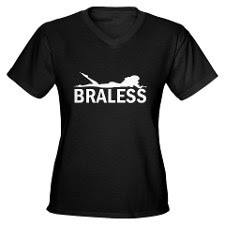 There are reports today of a new Islamic radical group (Al Shabaab) going to a new fundamentalist agenda.....banning women in their 'protected' areas of Somalia from wearing a bra.
They've determined that bras are Un-Islamic.
Apparently, and this is by press reports so you can never be sure, there are members of this radical Islamic group...mostly young guys....stopping women in or around Mogadishu and checking to make sure they are in full compliance or dishing out punishment if necessary.
There are a number of observations that I could make about this, and it'd turn into a long piece. I'd rather avoid that, and avoid commentary from the audience.
So I'll make this one short comment. A gentleman would never put himself into a position of seeing or proving if a gal is wearing or not wearing a bra. We can kinda prove on this point, that hardcore Islamic guys aren't gentlemen. And if a lady was around that particular time of the month when Johab the Islamic nut was going do a "feel".....she'd likely have the 12-inch butcher knife up her sleeve and cut on Johab without much mercy. The guys with Johab would stand there and kinda ponder where Johab screwed up and maybe come to some senses....if this was the real world.
at Thursday, September 02, 2010 1 comment:

My brother decided that a authentic picture of the state line wet-dry situation needed to mentioned....and provided me this shot. As you can note here....it is in plain daylight, when few if any mortal souls of Bama would pass by this critical road....to taste a bit of beer.
It's best you only stop in darkness....to avoid being seen and identified later by your minister or neighbors.
You are gazing southward, into the heart of Bama, and into a dry county. It's barely a hundred feet or so past those trees on the left where the state line lies. Typically, the "law" stays a about a mile down the road or more....giving you a chance to think you are safe.
at Thursday, September 02, 2010 No comments: