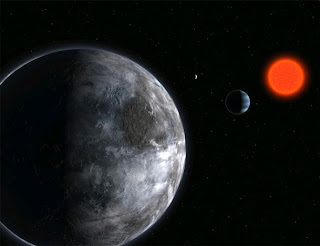 We are a strange people.  We work around two vastly different groups in our society.  Group A would like to believe in life beyond Earth.  They think about this and continually chat about the nature of this idea.  Group B would like to think of one society, one human race, and one Earth.  Anything other than our race....would complicate and perhaps destroy everything that they've imagined for decades.

This week....Gliese 581g” or the “Goldilocks Planet” came into the picture.   The science boys have done their homework, and now believe this plant....which way out there.....has a mass of three to four Earths, and orbits its star in just under 37 days.  They think it has everything necessary to sustain life.

For one group, this really pumps them up.  They've finally got something to gaze upon and ponder.  Life, beyond Earth....is now more than just a one-percent chance in their mind.

I'm a statistics guy.  I'm beyond the 'if' moment and readily accept that life is elsewhere, without any doubt.  The problem in my mind....unlike everyone else in the happy state  over this....is that I can also imagine two vastly races on this planet.  One could be a human-like being who has not advanced beyond 6-year old in terms of brain power.  The other race?  It's a group who are beyond our advancement, and possibly in the state of mind like Nazis in 1944.  We probably would prefer to never encounter them.

To me, this imaginary moment of first realization of other beings being fact....starts a mountain of pondering.  Imagine a society that has taken to global warming as a fact of life and has an entirely 'green' perception over how to live their lives.  They also expect others to do the same thing.

Or, how about the race that mostly lives like the lusty Roman dudes in old-fashioned Rome who had sex all day and could not imagine a society who wasn't into lusty business twenty-four hours a day.

Then, you could imagine a race where people stay doped up most of the time and barely function for twelve hours a day.

So all this news of new planets and possible lifeforms has some positive things....but in my case....I kinda feel like we are opening a door that we may eventually regret.  You could have some ship arriving....picking out the first hottie they find in Arlington, the first homeless guy from Detroit, and the first Bama farmer they encounter in Gadsden.  They might end being just as shocked when they ask their fifty questions and determine that we might not be as all intelligent as they thought we were.

So our only hope....is that I'm the first guy they encounter, and we can go through their fifty questions and perhaps settle on a positive impression right off the bat.   Hopefully, they don't ask me much about varieties of wine, grades of Swiss cheese, or muffler variations on a Oldsmobile.
at Saturday, October 02, 2010 No comments:

I have a problem....it's called skepticism.  There's no real therapy groups for this.  There's no way to really overcome this.   There are some things that I've just accepted over the years....but the vast majority....I'm still a skeptic of.  I sat around this morning put together my "list" of favorites that I just have problems with:

The thing about this group....is that there are thousands, and even millions of Americans who believe in this stuff....or they'd really like to believe.  I used to enjoy attend a magic act....until I got to the point of asking how each was successfully accomplished.  Today, if I do attend a magic act....it's almost an obsession to grasp the tricks to the magic act.

Some of these are comical in nature....like tarot cards.  You can deal out a couple of cards, and interpret them in any fashion you want.  What's to believe in?

This week, North Korea's 'dad' sat down and noted who would replace him when the final hours come.  Kim Jong Il.....picked his son....Kim Jong Un.  North Korea tends to make things simple....you follow the dynasty.

The curious thing here....is that this wasn't the number one son....the older son.  Here in....lies a short tale.

Number one son would have gone onto great things, and been appointed to dad's position in life....had he not screwed up.  About ten years ago....he came up and tried to enter Japan with his wife and son on a fake passport.  The purpose of this trip?  A trip to Disneyland.  The Japanese authorities confirmed the passport there at the airport, and never allowed entry.  This event never sat well with 'dad' and when it came down to picking the placement of the supreme leader....well, this was held against son number one.

It's one of those short comical episodes in life....where you screw up, and things are remembered for a long, long  time.

I pondered over this for a while.  Everybody has a screwup or two in life, and generally gets over most of these.  Some of these are best left unmentioned.  Some involve a bad financial deal.  Some involve buying a stolen tractor.  Some involve some whacked-out girlfriend from Austin, Texas.  Some involve a job with McDonalds as a manager.  Some might even involve betting $500 on a Dallas Cowboys game.  But the idea of being the number one son of Kim Jong Il and trying to enter Japan on a fake passport to see Disneyland, is probably one of those stories that you just don't talk about....ever.
at Saturday, October 02, 2010 No comments:

The Girl Who Kicked the Hornet's Nest 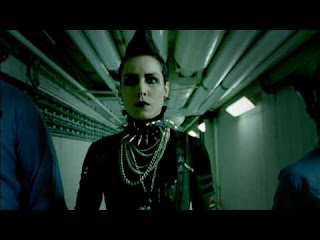 There's a new movie coming out that you probably won't see a lot of advertising on, and if it does arrive in your local town...it's there for two weeks max.  The Girl Who Kicked the Hornet's Nest.

It's a Swedish movie....the last of the Sieig Larson's three books converted into a movie.  Your chief character that you will fall for....is this extremely tough "lady" by the name of Lisbeth Salander.

Lisbeth is not the gal you bring home to introduce to the family.  She's not the lady that your friends would approve of.  She's not Miss Sweden or Miss Universe-type material.  She's punk, extremely bright, and a engineer's dream girl.  She thinks and reacts in the fashion that you'd expect out of a engineer.  The key thing is that if you got into trouble....she's the one you'd want to come and help you out.

I could go on and on.....but it's best to just reserve judgement.  Yeah, the sub-titles will be a minor issue.  And yes, it's a pretty harsh movie.  But, by the end of the story....you will admire Lisbeth.
at Saturday, October 02, 2010 No comments:

I watch around 30 minutes of CNN a day...it's rare these days.  Once a month, Larry King might actually have a guest I might be interested in.  The TV news host....like Anderson Cooper could have a brief 5-minute piece that might be interesting if I caught it as I flipped through channels.  And then, there was Rick Sanchez.....which I should indicate "was" fits well in this case.

I came to find the Rick Sanchez on CNN kinda like hiring some guy from the NBC channel in Mobile and just dumping him on the national network.  Rick had arrived at the big-time, and was making big bucks with CNN....and could have gone on for several years at that level.

This week....Rick got fired.  The quote from the Network? “Rick Sanchez is no longer with the company. We thank Rick for his years of service and we wish him well.“

Rick had been a comical target of Jon Stewart on the Daily Show.  Rick was very unhappy about this 'dump' on his.  So he took off on Friday via a radio show and made some pretty negative comments about Jon Stewart, the Daily Show, and even a comment or two about CNN that was a bit negative.  Yeah, at some point, he did call Stewart a "bigot".  Well....yeah, he did suggest CNN is run by Jews.

What happens now?  For a couple of weeks....CNN will just fill in this two-hour period with something.  I'm sure that forty journalists are trying hard to sell CNN on their abilities and they are willing to work for less than Rick Sanchez....just to get a start.  Adding to this episode.....Rick's show was actually doing pretty bad on the viewership, so this firing has some pluses to it.  Rick allows them a simple strategy of firing and hopefully finding a new angle to gain viewers.

As for Rick?  He'll quietly disappear for two months, and I suspect he'll end up at MSNBC or some major radio network.  Rick will do a decent job for a year or two, and one day....open his mouth at the wrong time....and likely get fired again.  That's Rick's style.

As for the Daily Show?  Well.....they've got one less target to mess with.  They may actually have to start going down to the NBC station in Mobile and pick of their folks to screw around with.
at Saturday, October 02, 2010 No comments: