Being Number Fifty is Not Preferred 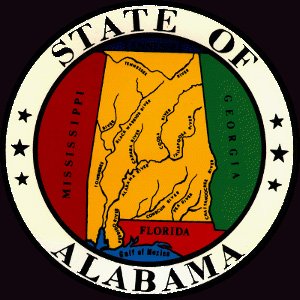 This morning, I was briefly worried.  In the midst of this  day....forty-nine states had joined up to investigate various banks on the validity of foreclosure documents.  Even the mighty District of Colombia had joined up.

Yes, it bothered me greatly.  Last night, it was up to forty states, and as the sun rose....it was forty-nine.

I felt that would lead to me having to defend my home state.  Accusations?  Well....it's always something that a Bama has to be on the guard for.  My original defense was that our political folks were very busy with Casino gambling accusations.  Then I was prepared to suggest that we just didn't have that many folks who were stupid enough to buy $130k houses for $250k.

Well....by this afternoon....our state Attorney General had finally awoken and decided that matters had to be taken care of.  Alabama Attorney General Troy King....admitting that no violations of Alabama law have yet been broken....said that Alabama leaders were troubled, and naturally, this lead Troy to wonder if he was the only one not to jump onto this deal....how stupid would he look.

My humble guess is that Troy doesn't know much about the foreclosure business....and if he does....he really doesn't want to bring harm to any Bama bank doing stupid foreclosure operations.

The other side of this coin?  Foreclosed is foreclosed.  Once you go bankrupt....you can toss around minor mistakes on the foreclosure episode, but you really have screwed up enough to lose the house by the time you've missed the fifth payment and show no hope of recovering.  There may be some Bama common sense mixed into this mess, and I suspect that Troy would have preferred not to get into this forty-nine state episode.
at Wednesday, October 13, 2010 No comments:

With this state attorney general game going on....and congress out of session because of the election episode....there's a good bit brewing on the stove.

I suspect by January....we will have sustained the 120k foreclosures a month through November and December.  Most of the banks will be in some form of distress with no way to exit the mess they've created.

2011 looks fairly miserable, unless you've saved up a chunk of money and was thinking of buying real estate in Nevada or Florida right now.  If you ever wanted a $250k house for $125k....this is the golden opportunity.  If I was a French guy or some German with cash for retirement right now....I'd be buying US real estate and waiting this mess out for two years.

If you are on the receiving end of this?  Well....it might be time to figure how bad you want to just dump the place and live out seven years in some apartment while the economy recovers and your credit rating comes back to a norm.
at Wednesday, October 13, 2010 No comments:

There's an interesting story over at CNBC, over dying public pensions.  These are pension plans for cities, counties, and states....which were never funded enough, had higher than normal expectations, or ran into a downward mess with the economy of 2009.

Big cities alone?  $574 billion, at least by what this study mentioned in the report indicates.

Within four years....Philadelphia for example....would run out of money. Boston and Chicago would survive until 2019.

They tried to end the report with the indication that the Federal government would have step in....although I can't see how anyone would agree to sponsor retirement for anyone beyond federal workers.

I sat and pondered over this negative report.  Whatever we gave out for stimulus (or have yet to give out)....would have to be duplicated in this case.

The responsibility back onto this current administration?  They need the national economy booming.  They need the Bush era in full swing or they will have to go out and bring in hundreds of billions just to get some poorly designed pension programs a chance to survive.

Are expectations of these state and city pension funds beyond reality?  I'm suspecting that everyone in Chicago, Philadelphia, and Boston will be shocked what they are paying for a guy who spent thirty years on the fire department.   The same will be true for city department managers who you suddenly find to be making $80k in retirement....which will make no sense to the regular folks expecting barely $20k a year from social security and $16k a year from a military pension or company pension.  I'm also suspecting that pension management in cities unaffected will try to hand out their resources quickly to join the free Fed money deal.

The end result?  A lose-lose-lose scenario.
at Wednesday, October 13, 2010 No comments:

One Last Note on Gettysburg 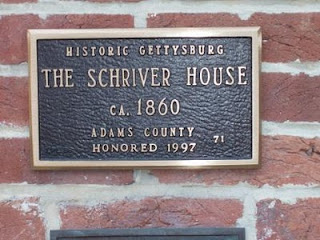 One of the mandatory things in Gettysburg that you need to see, but only at the end of your day....is the Schriver House.

It's a restored house from the 1860 period of the town, and there's a guided tour to explain both history and the culture of the times.

I always had this curious nature over the lack of closets in houses until the early 1900s. During my tour of the Schriver House, this got around to being explained.  Most women of the 1860s era....had three dresses total. They had the funeral dress which they probably wore on a frequent basis and might have last twenty years.  Then they had the nice dress for visitors or guests who came to the house.  And finally, there was the day dress, which was for real work.  That was typically it.  So you didn't really need a closet for two dresses that "rested" until necessary.

The Schrievers?  Well....it is a curious tale, which the curators can only tell a certain amount of the story, and you have to imagine the rest.

At age 15, this young Gentleman (Mr Schriever), watched his father die.  He was then left an enormous fortune.....dad was the whiskey 'king' of the region.  He knew the art of whiskey, and the economic ways of life.  Three years later....this young gentleman ended up marrying one of the local girls, and was headed toward a pretty good life.

Somewhere around age twenty-five, he made the decision to move from the farm on the outskirts of the town....to a property just inside the city limits.  He bought the property, and put up a sizable house, for a guy in his mid-twenties.  There are two odd things about this vision, which you can only speculate if his wife, or the kindly folks of Gettysburg knew at the time.....he was putting in a full basement....with half dedicated toward a bar.  Out back, he was putting in a 10-pin bowling lane within a structure attached to the house.

I stood there, in the midst of this tour....and started scratching my head.  These are all radical moves by a guy at age 25.  Folks don't exactly have a great view of bars.  The temperance movement is in full swing and this is not exactly the type of operation that you'd want in full view.

I'm guessing his customers were used to making the horse-ride out to the farm, and they'd probably commented that they'd prefer a place closer to the town itself.  You can imagine twelve guys riding out on a brisk cold November afternoon....and having a dozen whiskey shots....and after dark, riding back into town. It's not the kind of activity that any of us today would perform easily.  An hour on horseback....drunk....in November?  You might be fall off five or six times.  You might end up going the wrong direction and wake up in some field with pneumonia because of your drunken nature.

I suspect this guy Schriver was thinking ahead and viewing the use of the bowling alley and the pub in the basement....as guaranteeing his future for decades to come.  A political career?  Maybe.  It'd help if you had every male in the town viewing your establishment in a positive way.

How did his wife feel?  You just don't get a positive or negative impression on this.  There are two entrances to the basement....so you could enter from the back....thus avoiding any potential meeting with the wife.

The sad part about this story....as the house was nearing completion....the war starts.  He puts off joining the war until about the third year, and then goes.  In the end, he is captured and sent off to Georgia....where he dies of TB.  Both his young daughters die early in life as well.

My advice if you go to Gettysburg....make this the last stop and plan for 90 minutes.  It's an interesting to view the human side of this story....and how the war reshapes the lives of people.
at Wednesday, October 13, 2010 No comments: