For a number of weeks...on the campaign trail....the President used the slur-pee and car-in-the-ditch routine to sell supporters at his campaign stops.

In the last day or two....he's now switched over.  The ditch routine has run full circle....so now we've gone onto buses.

We now hear: "We can't have special interests sitting shotgun. We gotta have middle class families up in front. We don't mind the Republicans joining us. They can come for the ride, but they gotta sit in back."

The curious thing is that January will come and a new Republican-run house will be around.  Nothing gets accomplished without negotiation.  The President will have to make two or three speeches....to lessen all of the soap opera-like speeches that he made over the past six weeks....and mend his fences.

The amusing part will come when various news interviews come, and everything has to be very polite and forgiving in nature.  Naturally, there is a limit to this and I suspect by August....his rhetoric will shift back to "evil Republicans" because the next election cycle will start up.

I suspect that we are all getting tired of this mess, and it'd be nice to have some idiots in the White House, the Senate, and the House....whose number one priority is to chat about NCAA football, septic tanks, episodes of Gillian's Island, and the plus side of a Ford F-150 pick-up.  I hate to suggest such a fix....but this might be the only thing left for us.
at Wednesday, October 27, 2010 No comments:

Quote of the Day

“Every single great idea that has marked the 21st century, the 20th century and the 19th century has required government vision and government incentive,” he said. “In the middle of the Civil War you had a guy named Lincoln paying people $16,000 for every 40 miles of track they laid across the continental United States. … No private enterprise would have done that for another 35 years.”

I have to admit that those Meals Ready to Eat (MREs) were conjured up by military research, mostly because GI's refused to eat the old canned rations.  I could also go along with the logic of safety improvements coming from government research to some degree, but Volvo did the other fifty percent.  Yeah, it's true that alcohol-in-a-tube that we all use in the winter to combat flu and stuff....came from government research.

Before World War II, there really wasn't any research arm of the US government.  Most of what we see today....came since the 1950s.  We might be able to give Joe some room on this....but it'd be only a marginal area of space.
at Wednesday, October 27, 2010 No comments:

The Prime Minister of Italy....Silvio Berlusconi....had this idea.  Let the mayors of Italy have more power.  They could correct things that went wrong, keep a mess from becoming serious in nature.  At least, that's what he thought about his 'greater powers' concept.  It was supposed improve public order.

Off in the midst of southern Italy, along the coast....lies this town of Castellammare di Stabia. 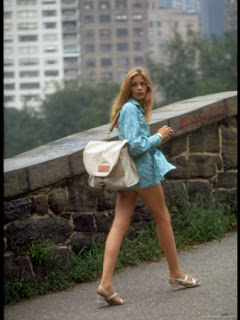 The local cops got new orders in this tiny town....scantily-clad women are now to be fined.  Course, you'd ponder over this....what would be defined as 'scantily'?  This list included necklines that plunge (you know what I'm referring to), mini-skirts, and jeans that hug a bit too low (like what you'd see at a local mall on the bottom of the hips of a 16-year old girl).

This order by the mayor was supposed to combat anti-social behavior.

At some point, the reporters got the mayor to explain part of this scantily-clad policy.  Mini-skirts themselves weren't forbidden....or classified as scantily clad clothing, unless they were 'so' short that they leave the undergarment showing.

Course, I'm from Bama......and I tried to imagine this vision of the mayors.  It sounded like mini-skirts were ok except when you saw the ladies underwear (or maybe the lack of underwear?).  Then it started to all make sense.

I read on through the article....the mayor hadn't just done business on mini-skirts...he'd had a number of bans put into place.  For example....cussing in public was now forbidden.  Playing soccer on the streets or open park areas was forbidden (you could play in soccer fields).  Then he got into sunbathing.  The ban with sun tanning in public was seemed to be a bit excessive but maybe folks were laying around on the public streets and showing more skin than advisable.

I have this feeling that the mayor isn't long for politics.  The next election will come, and sadly, he'll go (my prediction).  There's this phrase....'power corrupts'.  I suspect that it fits well for the mayor.  He might have done well and just signed up for the cussing situation on year one.  Maybe somewhere in year two.....he could have done something on sun tanning in public.  Maybe the third year....something else.

I hate to suggest this.  But the truth is that political figures don't need to accomplish a bunch of things to say they've become successful.  Folks kinda appreciate one or two really good measures, and that's typically enough to make folks happy.

I'd close this but I'm kinda curious now about visiting this town.  The photo I attached?  Yeah, I found it on a travel log and taken in the town.  Yeah, if you ask me.....they might have a problem with scantily-clad women.....but I can't say this for sure, unless I personally visited and had a chance to confirm it myself.  You understand my ethics here....of course.
at Wednesday, October 27, 2010 No comments: