I blogged on the 60 Minutes episode I saw on Sunday....on Newton, Iowa.  For some reason today, I had this fascination...to go back over and read up on Newton.

It was a sad and depressing tale that the 60 Minutes crew laid out, and I truly felt sorry for folks up there.  This is a town that actually has some history.

After a while, I realized that there's only three things of real value to really know about Newton.....at least from an outsider's point of view. 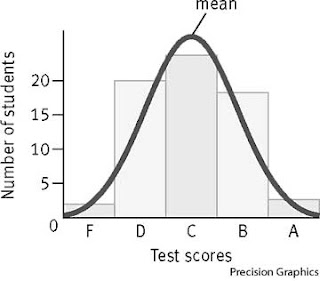 First, this guy who helped in the development of the Bell Curve....which we are all so knowledgeable about today?  Charles Murray?  He grew up in Newton.  I'm guessing he learned a thing or two about the Bell Curve before he ever left and went off to college and then later got famous over his application knowledge of the Bell Curve.

Most of us who grasp the model....do agree....but it's more of a statistical thing which can't be proven beyond numbers.

In 1938....with the Maytag factory in full operation during the depression....the management guys decided that they couldn't compete at the prices that things were selling....so they wanted everyone to take a ten percent cut in pay.  A massive strike occurred in Newton, Iowa.

The curious thing is that the state governor sent the National Guard over to Newton....with their tanks, and machine guns.  They were set up at the gate and ensured peace.  Course, you'd sit there and ponder how nasty or troublesome were these guys from Newton?  Things eventually got worked out and everyone took the ten percent paycut.

What I should mention here...is that Maytag packed up and left around three years ago, and things in this town have soured ever since.

Finally, an interesting note.  One of the greatest boxers of US history....Rocky Marciano....was in a Cessna in the summer of 1969...which was trying to land at the Newton airport.  Rocky had been retired for almost a decade, and died in a cornfield outside of town.

Newton is one of these curious towns of 15,000 souls (2000 Census).  Before Maytag ever came, they were barely 3,500 folks in town.  I suspect...in another decade....that they will proceed carefully toward the 3,500-level and come closer to that than the 15k number.  It's the sad end of a town which probably deserved better.
at Monday, November 01, 2010 No comments:

Today was an interesting day for METRO news (my subway and bus system).

First, on Saturday, down in the DC area at a major subway station....the escalator, which has a typical average escalator speed (like you'd expect in Atlanta, Rome, or London)....suddenly took off at three times the normal average speed.

Naturally, there were some folks who hadn't ever observed this kind of turbo-speed, and got near the top apparently....then got tossed off.  Those folks needed some medical attention and I reckon they've seen the hand of God at work in this moment of unexpected movement.

The METRO folks shut down the escalator and at a loss to explain how this could happen.  We sat around the office and we all thought there was one speed to all escalators....either up, or down.  Naturally, this brought out a discussion if speed "X" was ok, or if we'd prefer "X + 1" as our normal escalator speed.  I listened to the audience and voiced at the end that I was more of a mind to get quicker somewhere, and if 4X or 5X speed was available on escalators....I'd take that.  Course, I'd need some practice to jump at the last second.

The second episode was an amazing bus update.

The METRO bus folks had a meeting with METRO management.  The bus folks admitted that this job freeze ordered down upon them back in December of 2008, and continued onto May 2009 (that's fifteen months ago).....had really hurt them.  The boys then admitted that they were way behind, and had a hundred vacant bus driver jobs which really needed to be filled.

The management folks were kinda shocked, and then asked the CFO (the chief finance officer), if the "freeze" was supposed to affect bus drivers....and the CFO said "nope"....meaning the HR folks were never supposed to freeze or hinder their hiring practices for drivers.

You can imagine some silence in the room at that point.  The CFO indicated that she couldn't readily explain why the agency stopped hiring brus drivers.

The general manager then stood up to the board and indicated that this problem could readily be fixed by hiring a outside company to help HR...at a cost of $750k.  They'd already gotten a bid quote.

Naturally, I thought about this.  It was such a nice round number...$750k.  It's hard to find any company which would give you such a round number like that.  Typically, it'd be $698k or $755k, but this was nicely rounded....so you can smell a problem here.

The board then asked what the heck this contracted company would do that the HR guys couldn't do.  Then the HR guys said they didn't have enough folks to review the 1,000 resumes for the one hundred jobs that they had to fill.  So the $750k was to hire some folks to advise you on reading 1,000 resumes and give you the best 200 to possibly hire.

I sat and thought about this, and mostly laughed.  Someone has a cousin or relative....who is going to take the $750k and probably toss $150k back at a couple of idiots in the HR and management staff.

The board isn't readily buying this deal.  I could probably read sixty of the resumes for steak dinner and a case of Pabst....and recommend twelve of them...if they wanted.  They didn't have to pay the $750k if they don't want to.  I'm guessing the board will think about this a while and eventually offer them $250k to just do half and everyone will agree that it's better not talk about this in public again.

As for the 100 bus driver vacancies?  Well....by the time you mention a drug test required....about three hundred of the 1,000 resumes will be pulled...just my humble opinion.
at Monday, November 01, 2010 No comments:

Email ThisBlogThis!Share to TwitterShare to FacebookShare to Pinterest
Labels: metro 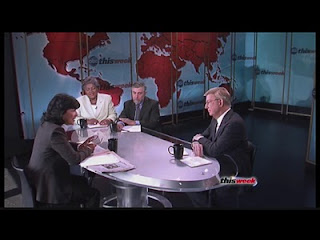 Maybe it's just me....but on ABC’s Christiane Amanpour's Sunday chat show....have you kind of noticed that George Will is sitting there and looking like a hunter in a hunting lodge, and he's got six deer in the room with him and just wanting to rapid fire on all six (in the room)?

The camera guy took certain angles about a month ago and I started to note how aggravated that George looked.  It's almost like he's Micky Mangle and having to play with high school kids.
at Monday, November 01, 2010 No comments: