It's just something to ponder upon as you travel by air this week.  The fine decided upon by TSA for folks who get upset by the x-ray treatment or the hands-on-your-butt examination....is $11,000.

Usually if you check fines in your local town....it's like $49.99 or $62.50 or some odd number like that.  Plus you also have to wonder why $11k was the sufficient amount and not $22k?  Who gets the money?  The TSA folks or the US government?  If you refuse to pay....do they come out and seize your car or do they keep you in the county jail for thirty days?

One or The Other 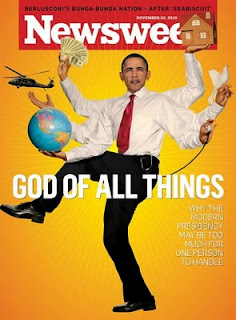 The Newsweek crew is known for doing as little homework as possible...to produce their journalism.  So this week....the cover came into question.  The symbol here is supposed to show the President trying to do all things at once.

The problem is...if you go and talk to a Hindu guy....the symbology of the arms and legs....equal Shiva...who in the Hindu world....is the destroyer of all things, including the Earth.

But to add to the legend of the Hindus.....Shiva is suppose to destroy the Earth....in order to recreate it in universal order.

So you are left with two suggestions in the image....that it was just poor understanding of the symbol or that the President is supposed to destroy civilization in order that a more orderly and civilized Earth comes about.