If Only The Bears Could Read 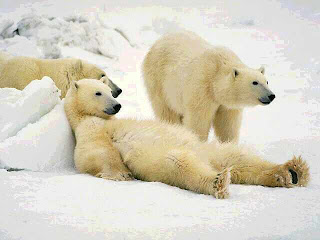 This week...an important event occurred in Alaska.  187,000 sq miles of land were sat aside as a protected area....for polar bears.

The chief rule of this protected area?  Well, of course you can't hunt there...but after that rule....you can't drill for oil there either.  Naturally....you'd be wondering how close this is to the ANWR oil area area of North Alaska....it'd be safe to assume it's fairly close and likely intended as a buffer to prevent extended drilling outside of that area.

For several million years, the polars have existed without a protected area.  In fact, statistics show the polar bear population increasing over the past three decades.  So the actual purpose of the polar bear "reserve" is kind of amusing to ponder over.  How does Randy the polar bear know when he's entered or exited the reserve?  Well....he doesn't.

On any given day....there might be a 1,000 polar bears in this 187k sq mile area.  Tomorrow?  There might be 300.  Next week...2,500.  So the polar bears come and go.  The nifty thing is that a polar bear can walk one mile over the border of the protected area....and he's not protected.  So the value of this protected region guaranteed by the US government....is questionable.

Now, if only the polar bears knew all of this.
at Thursday, November 25, 2010 No comments:

We give thanks on this day for a mighty fine year in Washington.  Yes, the Pentagon did have a bunch of leaks and structural issues but we never did have any sewage issues.

We are thankful that we didn't get on any of those METRO escalators that went into turbo and cracked a couple of folks in the head with concussions, or ride any of the buses that were driven by drunk METRO drivers, or were onboard any of those METRO trains that collided with anything.

We are thankful that our one fairly unplanned trip over to Anacostia, DC didn't result in any stabbings, shootings, or robberies.

We are thankful that it only snowed around 44 inches in the DC region (when it's supposed to be five inches a year normally).

We are thankful that the TSA folks over at Regan International were only half as bad as we had anticipated when traveling through the airport.

We are thankful that Papa Johns does make mighty fine pizza and does deliver.

We are thankful for health and welfare of all the weird characters we work around in the Pentagon.

We are thankful for amazing stocks and dividends, along with a bunch of failed banks, a bunch of idiot politicians telling us how they will fix everything, and an economy that rivals Bolivia, Romania, and Greece combined.

We are thankful for Auburn being number one in NCAA football, and this Cam Newton kid might one day be part of the Minnesota Viking's success.  We are also thankful that this might actually be Brett Favre's last season (hopefully).

We are thankful that Lost finally ended, even though it was a crappy last season and the last hour made no sense whatsoever.

We are thankful that Lady Gaga didn't fade out as quickly as we'd predicted and might actually last two years instead of one.

We are thankful that the Chevrolet Volt is going to be bought in big numbers by the US government, along with it's $2k charger which has to be installed at each station by a seasoned professional electrician.

We are thankful that the Hadron Collider didn't destroy the world (at least not yet).

We are thankful that aliens didn't land on Earth as folks had anticipated, and that Elvis didn't suddenly appear, and that no Bigfoot was captured.

We are thankful that Katie Couric is still getting a regular paycheck while waiting for some amazing job to appear out of nowhere to ensure her continued legacy in the news world, and that MSNBC is still surviving today without any real audience numbers, and that Newsweek was able to be bought for an entire dollar when sold this year.

We are thankful that Doctor House actually got Cuddy, that Dog the Bounty Hunter continues to get the bad guys off the street, and that Ax Men on the History Channel has real lumberjacks (not those fake types).

We are thankful that Ford thrives, and Chrysler is sinking (with it's Fiat buddy attached).

We are thankful that the President's team dreamed up this slurpee-car-in-the-ditch-Republicans-being-guilty routine and told it so often.  Slurpee got a billion-dollar advertising story and sold more Slurpees.

We are thankful that Nancy Pelosi gets some time off from a hectic speaker schedule and concentrate on just regular California business now.  And that Harry Reid gets six more years to concentrate on being Harry Reid.  We are also thankful that we didn't get an authentic witch from Delaware as a Senator who might threaten Harry with various spells.

We are thankful that the bird-flu virus never occurred and the billions wasted on the vaccine was better wasted on that rather than rapid-rail from Memphis to St Louis or from Vegas to Dallas.

We are finally thankful that things just kinda worked out in general, and that 2011 might be a damn fine year.  Well....maybe.
at Thursday, November 25, 2010 No comments:

The long term strategy....for decades....has been to remind South Korea that North Korea still exists.  So there will be some little love tap in the middle of the night, and some assault out on the DMZ, and then some short blast of artillery.  The game is simple...just remind them you still exist.

The truth is that North Korea really can't afford to go to war.  Their containment and happiness with things staying the same is critical.  The last thing on Earth that they really need is South Korea over-acting on a episode that North Korea did for the performance of the media and their leadership.  If South Korea came back and blasted North Korea....then the whole game would change.  This is something that North Korea strategy guys really don't want.

So I'm guessing things will be awful quiet around North Korea for the next ten days.  Then things will settle.  And six months from now....when everyone thinks the mess is over....then another little 'bump' to remind folks that the powerful North Korean government still exists.  And then we repeat this entire process again.  Yes, it's a bold strategy....act like the village idiot for ten minutes and cool it for six months...repeat....and just remind everyone that the village needs an idiot.
at Thursday, November 25, 2010 No comments: