If you are from southeastern Virginia...around the Norfolk area...you know the big story of the area is this closure of US Joint Forces Command.  You've got around 5,000 folks from the local area who are making a fair income off the Command, and this announcement by Mr Gates over their closure is upsetting lots of the locals.  It also has upset the political folks around Virginia, and they want something in return from the Pentagon for this closure.....to make things "right".

So today....in the Washington Post, AFRICOM was discussed.  For those who aren't into this military game....the US military has a major force in Germany who has the job of forming plans and US military strategy over Africa.  Originally....they wanted the command in Africa, but that concept just won't sell to any country in Africa.  So they quietly sit in Stuttgart and make the Germans happy with a number of US military personnel and contractors sitting there...with various tickets to Africa sold via the Frankfurt airport on a weekly basis.

The chance of Norfolk acquiring AFRICOM?  Before the break-up of Joint Forces Command?  It was ten percent.  I'd say now that it's closer to seventy-five percent.  In fact, it's a curious thing that one of these things happens....and could pave the way for the other to occur.  You'd almost think that this was scripted for the closure and for the acquisition of AFRICOM to move to Norfolk.  Yes, almost scripted.

What happens now?  The plan was to start shutting down Forces Command was supposed to be done and handed over to the Pentagon by the end of 2010.  The actual closure date isn't known, but I'd be guessing by October of 2011.  I'm guessing that a team is visiting AFRICOM in the next four weeks and devising the way of shifting it over to Virginia by the end of 2011....and thus saving the jobs there.

A shell game?  Yes.  I'm guessing from the day that they made the decision to keep AFRICOM at Stuttgart...it was a shell game in the making.  Some people win, and some people lose.
at Saturday, November 27, 2010 No comments:

If you have fifteen minutes....you might wander over to Fox News and read the Iranian Stuxnet article. It's a fascinating piece on how a number of folks sat in a room, and brought down the Iranian nuclear program with a simple plot.

To put this in a simplistic story.  A couple of guys likely sat down and dreamed up this strategy.  Everything about the Iranian program involves technology.  The curious thing is that it's all bought and nothing made internally.  Added to this....is the curious problem that the Iranians are like first-year college students in grasping the entire program.  And then, you toss on a bunch of Mullahs and political players who have no grasp whatsoever of technology.

As for the virus?  It's the most magnificent virus ever created....it has only one system that it wants to bring harm to.  It keeps passing itself around, until it finally finds the right target....and then starts to create reactions with the nuclear equipment....while all the time telling its manipulators that everything is fine, until the very last second.

First, there's the problem of eradicating the the virus.  Even when the guy finally stands up and swears that he's gotten rid of the virus on every computer in the nuclear complex....there's this one chance in a hundred that it has a fail-safe way of preserving itself via another disk somewhere in the complex and then re-introducing itself within a week.

Second, every single scientist within the Iranian program is under some threat.  They aren't working and they've got hundreds of security people asking stupid questions.  No one says nothing because they know nothing.....so that makes them twice as suspicious.  The longer they sit....the more anxity they have over this line of work, and maybe it's time to punch out and work for Taco Bell with less stress.

Third, every single piece of the hardware in the plant is now suspect.  Whatever results that the computer told it on operation....can't be relied upon.  So you've got to toss everything out the door and buy every single piece.

Fourth, since you know that someone has figured out your software package that runs the whole plant....you've got to dump that.

Fifth, with all these results....the safest route for a bunch of idiots running this program....is to dump the plant entirely, and bring in some Chinese company....with totally different software.

I'm kinda guessing that a couple of smart guys have this idea already and have already bought Chinese nuclear equipment and software....to develop Stuxnet II.  And in three years when they finally agree that the program is totally broke and bring in these Chinese guys.....it'll be a eighteen months later when they learn that the Chinese-equipment is just as corrupted. 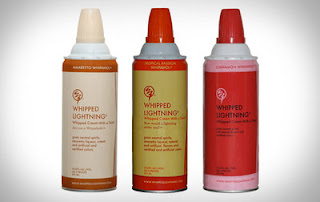 This week, after the caffein-in-a-beer drink was told to halt production....folks got nervous about the next drink-item coming under review....whipped cream with alcohol in it.

Whipped Lightning apparently has 18 percent alcohol, and you just top off a drink with it or add this to an item like cake or coffee.

So there's public outrage that you could create something like this.  I'm guessing it'll be forced out of production within a month.

Could you get drunk off a can of this?  I kinda thought about this, and would speculate that it may not have all the punch folks suggest.  I'd personally like to try a can before I pass judgement.

This does show how creative we've become.  At some point in the near future....I expect ketchup to be on the market with a alcohol added to it.  I doubt if it lasts long....before the fury hits the fan.
at Saturday, November 27, 2010 No comments: