Typically....about every forty-five days....someone from within the White House will drag out the topic of light rail or bullet trains.  It'll get bounced around the public for about six hours, and then fall flat.

The President mentioned light rail and faster trains in his State of the Union address.  He wanted folks to know that it would be a part of our future.  Typically, about half of whatever a President says (going all the way back to Washington himself).....never comes true.  I'm thinking that light rail is the same.

The problem with rapid rail or light rail....is that you plan a point like San Fransisco, and the destination....maybe Seattle....and then you ask how many people would use the system.  This triggers a business model.  For some odd reason, you always come back asking how you can sustain a profit or pay for the system.  The truth is that you can't outrun the airline providing service, and the cost typically would be almost as much as you'd pay Delta or SouthWest.

There are a couple of points around the US where this might work in a very limited fashion....like New York to Washington DC, Miami to Orlando, and maybe Vegas to Los Angles.  That's it though.  These folks with hopes of a Atlanta to Nashville run?  Forget it.  The folks with a Dallas to Houston run?  Forget it.

When the government finally does jump in and pay for one big run....like Chicago to New York, and discovers that it can never sustain any profit....everyone will sit down and shut up.  It'd be better to take these buckets of money and start fixing bridges and roads across America, rather than pumping them into a  non-sustainable railway.
at Thursday, January 27, 2011 No comments:

A Bold and Refreshingly Old Idea 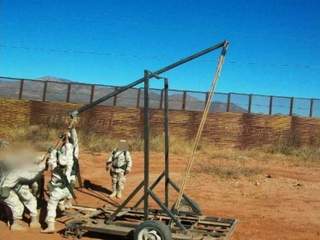 It is an odd story.  Between the US border patrol, US National Guard folks, and the Mexican border patrol....they came to find this catapult sitting just yards south of the US fence.  Apparently, drug smugglers would come up on the Mexican side and slang packets of marijuana over the fence to buddies of theirs.

It's mostly a shocker because no one has ever seen a drug operation operate in this manner.  Based on a dozen news items that I read on the story....no one is sure how long this has been in operation.

I'm guessing a couple of drug guys have been watching the history channel and finally began to realize that catapult idea was pretty nifty and just built it.  The last one?   I'm doubting that.  I'm thinking we just might see hundreds of these built over the next year or two.  And the bottom line?  Instead of advancing toward new and modern techniques....we actually have some folks going back two thousand years instead, for a technology that we kinda laughed over.
at Thursday, January 27, 2011 No comments:

It's a news item that is kinda hid but appears in several stories today....the level of new home sales for 2010....was the lowest in 47 years.

Adding to most commentary....the expectation by experts that a "recovery" might be years away.  We aren't talking about something good in 2011 or 2012.  Most banks are now talking about a 30-percent down deal on really expensive houses (over $300k).  The truth is that you just won't find folks in a position to take everything they have and put it down.  Folks want to keep savings for what they consider to be retirement.

My guess is that we will see a long period now where folks look at houses over forty years old (of lesser value), buy them, and refurbish them.  The guys with Home Depot will see a jump on self-improvement type jobs involving their wares.  I would suspect that even house-trailer sales will jump because you would easily be able to buy one of those with your money....rather than look for $70k in cash for your down-payment for a regular house.

So if you have a decent place now.....you might want to keep a positive view over it.....because it just might be your residence for another decade.
at Thursday, January 27, 2011 No comments:

On Tuesday night here in DC....there was a light indicator of some rain and snow mix.  Too warm to stick. By Wednesday morning....they were forecasting a bit of snow after 3PM and it would stick.  By 1PM at the Pentagon, they were telling folks to leave two hours early.  I didn't leave until almost my normal time to leave. And then, all hell broke loose.

It was the largest flakes I'd seen in years.  It was half sticking and half slushing.  There was probably an inch on the ground by that point.  It was snowing at a rate of an inch an hour.  The curious thing was the wind involved, with snowing blowing almost horizontal at times.

I exited the Pentagon to find around 150 folks waiting for my normal bus (it only holds 65, and that includes folks standing).  I decided this would be stupid waiting and went over to subway and went to the next suburb over (Pentagon City).  There I found my "second" bus, with forty people already in line.  Two minutes later, there were 100 people behind me.  The bus came and we proceeded.

We made it around half a mile before we hit the line.  This would normally be a seven-minute ride.  In the end...it took almost two hours to travel the three miles.  I actually could have gotten out and walked this in less than forty-five minutes...if I had simply worn my boots rather than leisure shoes.  You could tell the bus driver was aggravated after an hour in this mess.

The problems were simply revolving around the slush and the inability of folks with poor tires not being able to get any traction up small hills.  I sat and watched someone in a two-seater BMW who couldn't even pull out of a drive.

Adding to this mess, as I discovered as I got home and watched local news....there were lightning strikes going on as well.  This is not a traditional thing with most snowstorms and folks were a bit shocked at thunder going on while snow fell.

The curious thing...as I was doing this....the President had landed over at Andrews.  Typically....the helicopter would have landed and taken him for a five-minute ride over to the White House.  Because of the intensity of the storm....they grounded the helicopter.  I'm even surprised that Air Force One landed because most of the commercial flights were being rerouted by that point.

So they brought in the President's car and were to drive him over.  The trip would normally take twenty minutes.  By the time you added in the slush and the traffic.....it was an hour-long trip.

I would have to classify this afternoon as one of those dozen odd events of my life that you come unprepared for and simply have to sit through.
at Thursday, January 27, 2011 No comments: