The Reality After Waking Up

Somewhere in 2,000 pages of healthcare law, there is piece that covers the 1099 tax form.  This requires any business that buys $600 or more from a vendor to render the 1099 form.

Folks have woken up and realized the paperwork involved....and bluntly....started addressing their anger and hostility toward their congressmen (both Republican and Democrat).

What does the 1099 do?  Well....for several decades, the IRS has realized that America has two economies (the one folks report income about and the one that folks don't report income about).  Someone in the government got smart and figured that this 1099 form would suddenly release the floodgates and bring in the real numbers....and pump up the IRS revenue bucket.

Whats the magic amount that IRS thinks is hidden income?  350 billion.  Yes.  It is a fairly large size of money.  They did some type of analysis years ago, and they think there's around 350 billion that moves around the US in a hidden form.  My guess....if you counted illegal drug sales.....then this amount probably is very accurate.

The problem now?  Some folks now believe the best thing to do is to double up on cash purchases and forget about reporting that income entirely.  They would avoid the 1099 paperwork and just skip to a happy point where income wasn't reported....at a much higher rate.

In the last month.....some financial experts have come out and noted that they think less income reported will be the next result, and frankly.....this worries both the economic experts and politicians.  Let's say that by December of 2011....IRS says that revenue reporting is six percent less than last year.  It could accidentally trigger huge issues on Wall Street and trigger a non-existent economic problem....which would naturally worry the President and Congress at the same time.

My guess is that enough Democratic senators will now agree to this deletion and the 1099 threat will be removed by the end of March.  If they don't....then we go into a recession toward the end of 2011....over false data.....and shake our heads over why things are better but the number results just aren't there.  And Larry down at the town garage has a new speedboat, a new RV trailer, and a new mistress.....and he says that he's practically broke while smiling.
at Saturday, January 29, 2011 No comments: 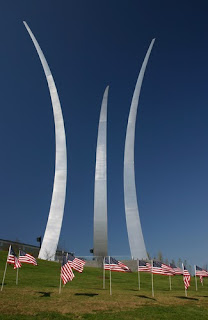 Here about two miles from my place (between me and the Pentagon), is the Air Force Memorial.  It rests on a hill overlooking the Pentagon.  To be honest, it's overly obvious and you can't miss it.  The Navy folks owned the real estate there and put a argument against locating the Memorial there but the Air Force won in the end.

It's a curious Memorial.  I doubt that they get more than a hundred folks there on weekdays in the winter.  In July and August on a weekend....they might get 400 folks to stop and visit.  It's mostly all buses that stop by the side of the road...dump folks off for twenty minutes....and then take off.

If you go to the Iwo Jima Memorial....you just walk or drive right up....no barriers, full parking, and rarely a guard (if there was...it'd be a National Park Service guy, who'd be mostly talking to folks anyway).

This week, in the midst of our big snow episode....as I came around the next morning....here was an entire crew clearing snow from this VIP parking lot.  Must have been at least four guys and they were doing a 4-star job.  I sat in the bus and watched this as we passed.   This is all costs borne by some foundation (not the government) in some fashion.  The snow removal.  The parking lot with no real function.  And the guard to protect the place.
at Saturday, January 29, 2011 No comments:

There's a nifty story which will never make it to the national press....which involves Iceland and constitutions.

Iceland has gone through a major mess over two years with a economic meltdown, political turmoil and public disgust with just about everything.  At some point last year, it was decided that one of the problems that they had was their constitution.  It simply didn't do enough.  So a decision was made to bring in a constitutional assembly, and rewrite the constitution.

We've talked about this option in the US.  We have the ability to do this, but there's a great fear that such a meeting would bring in so many special interest groups.....that the real goal of an American constitutional assembly would be overshadowed by a huge mess of accomplishments at the end.

The Icelandic were desperate enough to just overlook that.  Adding to this curious event in Iceland....they were going to vote for people on the constitutional assembly.  In a country of 319,000 people....this meant that a people could vote for neighbors, town drunks, or even the town slut.  Everybody had a chance.  By the end, there were roughly 500 candidates for the 25 positions on the constitutional assembly.

So they went forward and had this election to vote for their choices to head up this constitutional assembly.  This past week....after the election....the Supreme Court of Iceland got involved with the aftermath.  Basically, they weren't happy with this business at all.  You almost got the opinion that they really didn't want regular people messing with the law.

The end result was the Supreme Court voiding the entire result of the election.  Yep, cancelled.  There's debate over this voiding.  They tossed out the entire result.  First, there's this issue over the ballot slips being numbered and barcoded....which wasn't typical in Icelandic elections.  Folks were upset about this because it was possible for someone to track each ballot back to one individual....which meant secret voting was non-existent.

Then you had polling stations set up with short cardboard parititons....which allowed folks to peak over the board and watch you vote.  Curiously, they had a normal procedure which involved traditional polling booths, but these weren't used in a number of polling stations.  No one can explain why....and that's a curious thing.

Then there's this issue over folding.  If you voted....you were supposed to fold your ballot in half.  There hadn't been a rule like this before.  So the judges thought it was curious to suddenly make a fold-in-half rule.

Then came the ballot boxes.  These weren't the lockable type.  So you could get two guys transporting them to a central place for a count, and they could have rigged them up and tossed in another fifty votes.

Then the counting of the ballots had a curious issue....it was not to occur in a public setting and no candidate could watch the counting in person.

Some folks now believe it's such a mess....that an entire new election would be required (with the fixes) before anything can move forward.

Meanwhile, it's also obvious that a number of Icelandic people didn't vote.  The reason?  The driving force behind this entire constitutional assembly....is this idea of making every resource in Iceland....a resource of the state.  This means if you went fishing and caught a fish....if they had a tax on each fish, then you'd have to pay a tax for the government's fish.  The sheer idea that any government owns fish....is pretty silly, but folks started to think deeply about just how far this would go.

The water in the pond out back of your house in Iceland?  It'd be a state pond.  The water you flush down the toilet?  State water.  The rocks on the side of the road?  State rocks.

After a while, I started to ponder upon this.  Maybe the Supreme Court took an odd step here.  But if the end result came to be national ownership of everything of a natural source....it'd be a curious outcome that you probably wouldn't want.

Maybe the court did something in a strange way.....to prevent a massive amount of stupidity.  And maybe that's the only way to keep folks from making a bigger mess than what they already have.