The Truth About Teaching

There are two things I learned today about teachers and education.

First, out of Sacramento....at Rosemont High School....they made it a priority to offer up a Japanese language class.  In fact, it's an advanced Japanese class.  It's a curious thing....they can't find a teacher who can really teach it....so they found a long-term substitute, who doesn't know any Japanese at all.

Course, you'd sit there and ponder on this a while....a full-up class.  Kids intent on learning Japanese.  And no one in the room....even the teacher....speaks the language.  Yes, it only makes sense in California. 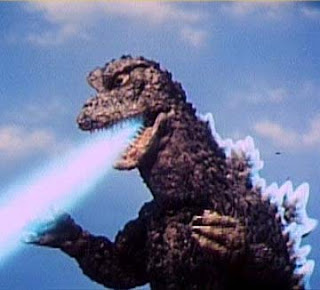 So this is how it works....they watch movies in Japanese and take notes.  This is the comment from a kid in the class who is taking Japanese III.   The sub has a background in Asian studies....so they can cover culture and history, after they finish up the Japanese movies.

I thought about this for a while, and then it occurred to me that if you were to select any decent movies to learn a language....then Godzilla would be the best choice.  Course, you'd need subtitles.  After each Godzilla movie....then you'd need to discuss everything you saw and how Godzilla was good and bad at the same time....eventually saving Japan a hundred times and never asking for much in return.

The problem here is that some kids might take exception to Godzilla....and their parents might complain that he's not caring enough or compassionate enough to offer the bad monsters a chance.

Then I came to the second story which is a bit comical.  Out of Wisconsin....someone finally woke up and realized that only 32 percent of 8th grade kids in the state...can read proficiently.  The rest of them?  Well....it's less than proficient.

So you sit there and start pondering about this.  Over sixty percent of the kids in the eighth grade in Wisconsin....can't read what's really expected of them.

The curious thing is that they spend over $10.3k a year on each kid.  So you'd expect results for money like this.  That's almost enough to buy half of a brand-new pick-up.

Yes, there's some problems with the American public sector school system....but it's best not to bring this up because....then what?  Fixing it?  You'd just have to toss more money at the problem.  So you are best not to admit anything and hope that Johnny can read 3rd grade level English by the time he graduates, and maybe he takes advance Japanese languages....to watch all the Godzilla movies....which helps him later in life at the city roads department.
at Tuesday, February 22, 2011 No comments:

There's an interesting science report out today....affecting folks from Bama. It's from the Center for Disease Control and Prevention. Apparently, Bama is fairly bad off....having one of the highest concentrations of couch potatoes in America. I spent a while reviewing the data....and then I got around to pondering. 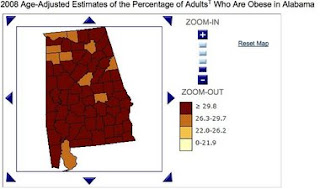 It's interesting report....because they went down into the county level and started to show where potato-ism is serious and where it isn't.

It's a curious thing....I grew up in Lauderdale county which if you gaze at the map....it's the county in the upper left-hand corner.  And basically....the data says that folks there....just aren't couch potatoes.  They were actually a lot better off than regular folks from the rest of the state.

Of course, this is a curious thing....why are things different in Lauderdale?  I looked at the map and then kinda noticed that most of the tan-colored areas.....are "dry"....which means they are in the middle of God's country.  Or at least the local deacons would stand up to say this.

Having lived around Lauderdale for the first eighteen years of my life....it's also obvious that folks tend to do things the hard way.  If you had a septic tank issue and had any backhoe equipment available....you'd send it away immediately and want to do everything manually (digging inch by inch with your cousin Karl). If you had hay to haul....you'd want to do mostly by hand....just to get that true feeling of hard labor.  If you had a choice of cutting down a tree with a chainsaw or ax....you'd flip a coin over the choice.

Then there's the fix-it-yourself issue in Lauderdale.  When you had the truck axle all broke....you'd avoid the dealer and the local garage guy....and order the part yourself.  You'd spend all of Saturday and Sunday doing the repair....just to proudly say that you avoided paying the garage any money.  The same is true with tractor repairs, dishwasher repairs, and lawnmower repairs.

The curious thing is that a couple of guys from the Center for Disease Control and Prevention probably didn't spend more than four hours in the county....collecting their data and then moving on.  So the folks in Lauderdale earned their rating...mostly by luck.
at Tuesday, February 22, 2011 No comments:

As most of you may remember from last week's blogging...I chatted for a brief time on the Birmingham 'dream-trip' to a community conference up in Anchorage, Alaska.  The present cost...if this were to happen was around $360k.  If you remember the details....it's totally funded by the city, and when it all came to light....a number of newspapers asked how a almost-bankrupt town could afford this.

Well....now an update.  Last night the Mayor of Birmingham stood up and suggested three steps to save on this trip....thus letting everyone still go.  The idea of lessening the 180-odd folks has yet to be grasped.

The ideas?  First, he suggested that delegates ought to stay two to a room.  Second, he wanted the trip to start a day later....thus cutting out one entire night at the hotel.  And finally, he wanted to find another charter flight or use commercial tickets that were cheaper (if this were still possible).

The problem I see here....is that you have to find folks who are willing to share a room and can hook up with another member.  This invites some guys to call up a gal on this group and ask her if the two of them could share a room for the sake of saving Birmingham money.  You can see where this would go.....weeks after the trip....a bunch of rumors about Joe and Martha, or Larry and Suzanne, or Monica and Marty.

The commercial tickets idea?  I'm guessing it's a bit too late and the other folks who want to attend this conference have taken up most tickets.  The private charter may be the only way besides Greyhound Bus of getting there in time and leaving on time.  Anchorage is a bit far....you know.

Toward the end of this city council meeting....the local media folks asked the mayor about the stupidity of of this expensive trip (boondoggle was actually used)....and the mayor wanted everyone to know that the neighborhood associations had this right....unknown to most folks.....to spend the money they've been allocated.  The mayor then admitted that he just didn't have the power to override their votes.  He didn't explain what mythical or imaginary votes that they had....which might have been interesting to know where these votes came from.

Again, if you are from Birmingham.....I can understand why you don't acknowledge this publicly much.  I do feel sorry for you folks.  However, if you are looking for a roommate for the hotel deal....I'd suggest to find someone who carries a significant miniature liquor collection with themselves....as this will be important in Anchorage.
at Tuesday, February 22, 2011 No comments:

I sat yesterday and listened to one of the absent Democratic state senators from Wisconsin.  He wanted everyone to know that he's at work each and everyday....via electronic means.....even though he's out of state and not in the capital statehouse in Madison.

I sat and had a fair laugh....then pondered over this reality....representing folks via electronic means.

If I were to take this serious, then I could envision people getting elected into a position and actually working out of a condo in Hawaii, or a hotel in New Orleans....while representing their state.  You'd cam into a session....hit a button to speak....and then cut loose with really negative comments  on your opposition, while sipping a Pabst and watching a episode of Judge Judy in the background of the hotel room.  Something doesn't make me feel good about that kind of representation.

Wisconsin is a representative democracy....meaning that people representing voters run the state's affairs.  This isn't a place where everything is put a ballot and voted by the residents of the state.  Most folks view representative democracy as meaning real, live and participating efforts....within the boundary of a statehouse.  So it's hard to visualize this as being representative.  Toss in the fact that folks are sitting a state away....and it just gets more difficult.

Toss in the fact that you might step out of your hotel room, and Randy (your 12-year-old son) might step in and suddenly start representing folks at the legislature....without anyone figuring this out.

How would you pay taxes?  If you are sitting up at a hotel a state away for two months.....representing folks....shouldn't you be getting paid, and that new state ought to be getting a portion of your check for their taxes?

This Wisconsin state senator doing the interview to explain this....wanted everyone to know that he had the latest technology at work.  Does that include virus type software?  No chance that your communications are being intercepted by some Chinese government guy named Hung?  No chance that a kid in Iceland is reading everything you are typing to your voters in the state as you type it?

I'm just not buying into this mobile representation thing.  A real statehouse is like a Greek opera in progress.  There are people falling over themselves.  Stupidity is tossed out on a minute-by-minute basis.  Negotiation is taking place in the hallways as folks sip coffee and toss down a cinnamon roll.  Anger is obvious....but smiling takes place to reassure folks.  You can't convey or discuss things via electronic means and achieve the same results.

I'm pretty sure that Ben Franklin and Thomas Jefferson would be rolling on the ground right now.... laughing...if they were around.  I would imagine that this is a circumstance that they probably wouldn't condone.  But this is the reality of 2011....folks sitting in a Best Western a state away, hooked to the internet, representing their voters, and likely sitting there in their underwear with a Packers T-shirt on.
at Tuesday, February 22, 2011 No comments: