The Trouble with bin Laden Today

So you sit and start to ponder on this.  You'd have to expect thirty senators calling up the CIA and now asking for a review of this bin Laden frisky lusty video stuff?  They will jump into SUVs....drive over to Langley, and then the CIA will escort them to a private room....with a big screen TV, a remote control, and a tissue box on the table.  The senator will get thirty minutes and then come out sweating....and asking if he come back next week to view it again.  The CIA guys will snicker a bit and say sure.

Weeks will pass as the senators discuss all of this and ask if copies of the lusty stuff can be distributed to their offices.

Eventually....some guy will come out and swear that he has four hours of bin Laden lusty video that he stole from the CIA, and sell it for $40 a DVD.  There will be copy #1, #2, etc.

So the question comes now....was this bin Laden's own personal video collection....or did his Captains who protected him have it for their amusement?  That....you will never know.

Personally....I suspect it really hurts the image a bit for the Mullahs now to talk about the "holy one"....and then their recruit reads about this lusty video collection.  And if it ever comes out....that it all mostly Mexican midget gals or American ladyboys from Texas.....man, that would really hurt recruitment.

Finally, the funny thing is that we have this huge effort in the government to prevent any lusty video stuff from getting onto government computers.  You can actually get jailtime....so here is a CIA analyst sitting there....having to watch hour after hour of this stuff to document it....on a government CPU, and wondering if some security idiot is going to track all this down and accuse the CIA guy of crimes.

The Way to Make a Million 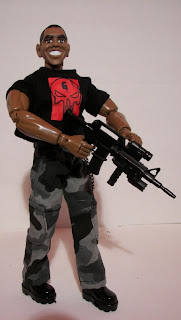 Word got out this week....some kinda GI Obama Seal doll is now on sale.  I've read differing amounts on the cost....mostly around $30 to get it to your mailbox.

I'm guessing it's mostly Republicans buying it to fit into a stocking of a cousin or nephew who is leaning Democratic but unhappy.

The thing you have to appreciate here....is the entrepreneur attitude of this guy with the idea.  He is a true capitalist.  He probably bought 50,000 of these Obama dolls and having them sit there for months on the shelf.  Made from some company from China....waiting for the right moment.  He probably had the dolls made for $8 each.....and will clear tens of thousands on a brief moment of American effort.