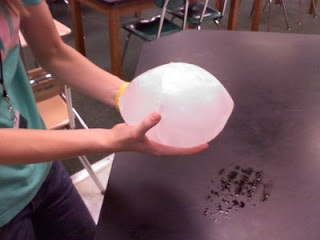 There's an interesting picture today of a chunk of hail that fell in Oklahoma a couple of days ago.  If you look at the size....it's about the size of a melon.  Weight?  They didn't say....but I'd guess at least ten pounds.

Naturally, being from Bama, I sat and pondered over the possibility that you'd be standing outside your house and thinking that a couple of small pieces of hail wouldn't matter much....and you get whacked in the head with this chunk.

It'd likely knock you unconscious and your trailer gal....Wanda....would likely call the ambulance.  You'd be coming around five hours later at the local hospital and blabbering about demons and the smell of hay for some reason.  They'd use a picture to show you this big huge knot on your head.  Hopefully, your gal Wanda kept this chunk as evidence....otherwise, you'd be thinking she whacked you with the baseball bat.
at Sunday, May 29, 2011 No comments:

If you follow the news....there is an item of significance sitting there about Iran this weekend.  Apparently....the masters of control....the Mullahs....are now taking various steps toward cutting off the world's internet from Iran.....so that they'd just get Iranian internet, pure and clean of course.

The idea is that they would sell this to the public with the concept of it being a cost-saving episode for regular folks....and of course, this would be fine for Muslim moral values.

I sat there a while pondering this.  You'd basically cut off all internet traffic going into the country, thus fixing things?  All this would take is some kid with a $200 modem....calling up some neighboring country, and then hooking his phone up to be a funnel to bring real worldly internet to these poor folks.

You can imagine some techno geek sitting in front of a mullah and saying sure.....we can cut off the world traffic....and just grinning because the mullahs don't even have a grasp of technology.

So millions will be spent on this business.  Mullahs will chat in the evenings about how they will finally cut off Iranians from Southpark, the Atlanta Braves, and YouTube.  People will sit for hours and hours.....thinking that they have "the power", and that it's a simple task.  But in the end....they will have given the techno geeks hundreds of millions to create a private internet, and then found that they were made fools in the process.
at Sunday, May 29, 2011 No comments: