The Scenario with Johnny Junior

This is a scenario to kinda explain the end result of this blog.
There's this kid....Johnny Junior....who has a computer and is hooked up to the internet.  Johnny Junior is fairly bored and ends up with a couple of chat-buddies who explain how to hook up into a university server in Mexico City.  Not that it really matters about permissions or such....Johnny Junior has simply acquired a log-on and password.
For a day or two, Johnny Junior plays around....inflates some grades at this Mexican university, and then he finds out this method to go from this place to a Brazilian hotel server....where he books rooms for some Phoenix couple....the Sines.
Johnny Junior bores himself after a day or two with the hotel, and moves onto this Bombay university server which has lots of science data over weather data....which he changes various temperatures and weather patterns from the 1988-1990 period.  This will later be used by some scientists to prove global warming occurred in India.
Johnny Junior then moves onto a Thai suitcase factory server....where he arranges for a forty-percent decrease in production overnight, and triggers a new panic with management over numbers which don't make sense.
Then Johnny Junior discovers this neat Chinese factory server, which he can use and then connect to a Chinese military server.....all via a Swiss beer company server, and back through a Delta Airlines maintenance server to his house.
Johnny Junior then decides to conduct cyber warfare against the US government....the SEC....over a three-hour period.
Over the next twenty-four hours....the US goes nuts, because this tracks all the way back to some server within the Chinese military....and it has to be an evil intent involved.
So we come to 31 May 2011.  The US military is now debating the idea of calling cyber warfare....real warfare....and possibly punishing in some fashion.  This might actually involve military might being brought against the Chinese in some fashion.  This is not part of the scenario....it is an actual topic that the US military is now discussing.
So you stand there and start to worry that some idiots in the US military.....might actually react to something....and only weeks later discover it was some kid....Johnny Junior....sitting in a basement room of a house in Topeka, Kansas.....who almost caused them to start some worldly conflict.
Just something to ponder.....as we talk war strategy and such....in this modern world.
at Tuesday, May 31, 2011 No comments:

We had a couple of odd events reported today.

First, in DC....the Mayor came out and wanted everyone to know that we needed two more levels of executive pay (the first at $225k a year and the second at $279k a year).  A number of folks on his staff were really excited about this new significant increase in pay.  Course, the fact that the DC government is nearly bankruptcy every month....didn't occur to them.  One of the city council folks stood up and finally noted that these two newly suggested pay levels....would actually pay more than cabinet secretaries make working for the President, and it would appear that everyone kinda quieted down a bit.  My belief is that this idea was a 7-minute concept....that lived and disappeared within this brief period.

OxFarm came out and suggested that food prices will actually double in twenty years and this is a terrible thing.  I pondered upon this....and if it was only double....man, that'd be a relief.  Man, I'm betting on a triple-growth situation in twenty years.

Eddie Long has fixed his issue.  For those of you who aren't familiar with Eddie....he's a hot minister of sorts over 25k folks in Atlanta.  The king of mega-churches in the region.  Eddie got in trouble last year when a gentleman or two came up and said that Eddie was having relations with them.  This kinda ended up in court....and today....quietly....the two groups ended their conflict.  Eddie basically paid off the guys....or his ministry did.....take your pick.  The church elders haven't said much of anything, and I'm guessing they'd like for Eddie to continue on....so their condo arrangements are secure.

The story finally got out today that Libya had $1.3 billion with Goldman Sachs.....in a currency investment deal....and lost 95 percent of it around fifteen months ago.  Libya got pretty upset about the deal....called Goldman Sachs to come and explain things.  So two guys fly over.  Funny thing.  It took about an hour for the two guys to hit the emergency button and some quick reaction force swooped them up and got them out of danger.  Goldman Sachs isn't saying much about this report in the Wall Street Journal.  So it brings us to ask how we got into this current Libya mess now....and if some Goldman Sachs guys are behind the White House tough talk.  The odds?  Well....it just might be better than fifty-fifty.

Finally, after the earthquake in Haiti.....there were some great numbers about folks dead from the event.  Well....it's finally come out that the numbers were fairly inflated.  The original numbers?  Over 300k people. The new numbers?  Between 46k and 85k dead.  Why the difference?  It helped produce way more aid than what you'd normally plan for.  As for punishment?  Nothing.  You can fabricate just about anything you want these days....and there's no punishment for a significant lie.
at Tuesday, May 31, 2011 No comments: 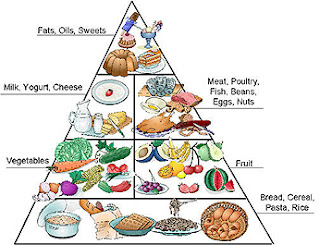 Way back....twenty years ago....a bunch of smart government guys got up and decided that they needed to tell us what we needed to eat.  Naturally, it had to be in a special shape....so we would remember this.  So, they chose the Food Pyramid.

Years have passed, and the Obama administration has decided that it now has smarter folks than what we had twenty years ago.....and they want to design a whole new scheme for what people ought to eat.

The new symbol....reportedly, will be a plate-shaped item.....and will have half the plate containing fruits and vegetables.

Cheese won't be mentioned....but according to one report.....there will be a spot for low-fat milk or a yogurt cup.

Does this mean anything?  No, for most of us....we never listened to the government in the first place.  Kids?  Well....some teachers will drag this out and quote the government in some fashion.....telling kids that pizza is evil and that bacon and sausage ought to be skipped entirely.

My honest belief is that around 2030.....we will get another Presidential administration....which will evaluate things, and probably give us a whole new view of the proper food groups.  And by 2050.....another Presidential administration....which will give us another entire view of the proper food groups.  If you sense things continually changing....yeah....that would be the right thing to perceive.

When and if you ever need the government telling you what to eat.....you might want to ask if there's a type of toilet paper that you ought to be using as well.  At that point....you will simply grin and start laughing.

The revised pyramid is part of the administration's crusade against obesity, led by first lady Michelle Obama.
at Tuesday, May 31, 2011 No comments:

A Day at the Park 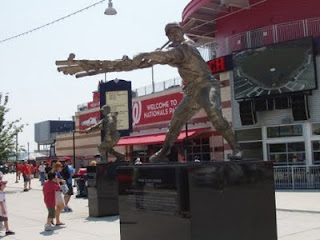 I spent the day over at the Nationals Park....watching a game between them and the Phillies.  Naturally, the Phillies won.

It was the first game that I had attended since 1994 (Royals).  It's an interesting experience.  The Metro dumps you off within 500 feet of the stadium.....so you don't have to park there ($35).  You can walk right up....no crime or weird folks to fight your way through.

It's mostly a new park (the Nationals came from Montreal, if you don't know baseball history)....although there's almost nothing to connect to the old Expos team.  At the front of the stadium are three statues....Frank Howard (the old Washington Senator #3 team), Josh Gibson (from the city's old black team of the 1920s and 1930s), and Walter Johnson from Washington Senator #1 team).  Yeah, no statues from the Expo era. Course, you might note this era one, two, and three of the Washington Senators.  Yeah, the teams never won much of anything and they never made any real money because people simply didn't attend.  They all ended up leaving.  I'm not saying its an indicator of things, but it wouldn't surprise me in ten years when the team finally admits it can't make a profit in DC......and leaves.  The different between the old teams and this one?  Lots of private areas for VIPs to sit and drink booze with congressmen and senators....and they make the stadium lots of money.

As for the park?  I ended up paying around $40 for a ticket on the mid-level.  To be honest....it was smart because the sun was out and at least I had a bit of cover.

The food and drinks?  I paid $14.25 for a chilli dog, fries and medium Coke.  Later, I paid $8 for a Bud Lite.  Toward the end of the game....when I got pretty dehydrated....I finally bought some alcohol slushy drink....for $12.  Frankly, it's a fair amount of money for just one guy to spend on two hours of baseball.

The highlight of the day?  I stood and watched some couple buy their five-year old kid one of those 18-inch imitation baseball bats.  The kid proceeded to whack the guy (probably the dad, I can assume) on the knee with this little bat and must have hurt like heck for several minutes.

The sad thing is that guy could have brought the wife and two kids out....in their car....and probably spent over $350 for an afternoon baseball game.  That's a fair amount of money....for two hours of entertainment.  I can't say it's a wise investment.....but it's the state of baseball in America today.
at Tuesday, May 31, 2011 1 comment: