A Word on Amsterdam 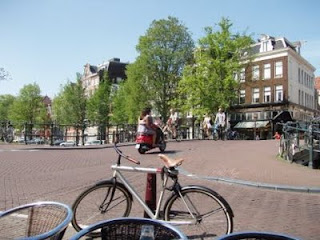 I spent four days of my trip up in the Amsterdam region.  The highlight was one afternoon....near one of the canals...sitting at a cafe with chilled water in my hand and a shade over me.

I sat and watched for almost an hour as scooters, bikes, and cars went up and down the intersection.  It was kinda like NASCAR....because you kept expecting folks to hit, and they didn't.  It did come close five or six times.  I saw the national Dutch finger salute put up several times.

Scooters have become this major issue on the streets of Amsterdam.  When I made my first trip back in 1984, I don't remember seeing any scooters at all on the streets.  Today....at this one-hour of traffic....I probably saw over three hundred cross over this canal bridge.  The vast majority of riders use no helmet....which I kinda found interesting.  Most folks wear flip-flops, which violates most motorcycle rules that we all know.

This NASCAR-like episode is probably one of the top five reasons I pick Amsterdam as a place to visit.  Between poor driving habits and potential accidents....and the beer, you've got the best seat in the house to watch for something to happen (even if it doesn't).
at Monday, July 04, 2011 No comments:

Donations or Loot, Take Your Pick

It is the kind of story that won't make much press in the US news.  Temple in the midst of India.  Temple has been there for hundreds of years.  Temple was in the midst of a trading route which dated back a thousand years.  Government decides that the "secret vaults" under the temple needs to be inventoried and put to the public knowledge.  Temple is now thought to contain over $20 billion in gold, silver and jewels....and there's still one more vault door to open.

It's a curious thing.  No one much within this community or religious sect had any interest in acknowledging the amount of wealth within the temple.  The government for some odd reason.....got involved and ordered the doors to be opened.  They haven't said anything past that point.....but the media has gotten involved and thinks the money ought to be used for all of India....to spruce things up, feed the poor, lay down highways, build bridges, and make folks real happy.  It's curious how media attention always focuses on other folks money, and how it could be used for something they perceive.

How'd all the money come to be?  It is a tradition with most Indian religious groups that you give something of wealth....to expect the Indian Gods to be in your favor.  You walk up....plunk down $300, rub some monkey's noise, and then for the next month or two....things work out better than you'd expect.  This attitude has been going on forever in India and still continues today.

What eventually becomes of the "loot"?  I think the temple guardians will keep their word and forbid the spending of the money, period.  I would also speculate that lots of temples are going to be forced open over the next year or two, and that eventually....over $200 billion is found in these temples around India.  The government will eventually decide that they ought to have the money....by hook or crook.

The curious thing here?  You can't find a single temple or church in America where folks kept that much honesty and left the money in trusted hands.  It all tends to get spent as quickly as it was handed over to the church.
at Monday, July 04, 2011 No comments:

US Airways: Four Out of Four

It was an interesting travel arrangement.  I flew out of DC via US Airways, and the first leg was approximately 90 minutes late taking off.  The second leg from Philly to Frankfurt?  In that case, the plane was broke and we sat there for two hours waiting on repairs.  Returning?  The flight was delayed about 110 minutes because of another broke plane in Philly, so we left Frankfurt late....so late that they ended up giving me the last flight from Philly to DC tonight.....and it was an hour late taking off.

The cherry on this cake?  The dimwit gal in Philly at the last leg....walked over to our counter and announced that the flight had been canceled.  Naturally, this triggered huge upset feelings.  We were all told to walk 300 feet and reschedule.  Well....the customer desk checked and then said that the flight canceled was the Cincinnati flight next to our area....not our flight.  The idiot had gone up to the wrong counter and never realized what flight she was talking about.

The odds of four legs of a trip all being late?  Four out of four?  I thought about this.  In my entire life....I've seen a late leg and there....but never four legs on the same trip.  US Airways?  I'd consider them the Greyhound bus operation of airlines.  The seats are tiny....the food was crap.....and their maintenance team is lousy.  I won't be riding them again.
at Monday, July 04, 2011 No comments: