A couple of years ago....I went off to Rome.  It was one of those weekend trips and just one full day of walking around the city.  For a guy from Alabama....it's one of those things that you need to accomplish before you pass on.

The highlight of this 12-hour walk around Rome....was the Colosseum.  For you folks who've seen the movies and the pictures....the plain truth is that it's really not that big of a structure.  You might be able to put 40k folks in the place on a good day, but I seriously doubt it'd fit more than that.     You can't get past the front door without paying an entry fee, and the waiting time is a minimum of an hour. 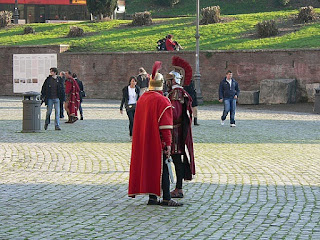 After I finished up my observation of the Colosseum....out on the backside of it is this area where tourists kind of mingle.  Here were a couple of guys in old fashioned gladiator clothing, with authentic-looking swords.  The curious thing was that you could not stand next to them for a picture unless you paid roughly $14.  I stood there laughing when this was explained to me.

Up until that point of the day....I'd been mostly amazed at how cheap a day in Rome could be.

Today, news came out of Rome that the local cops had decided this gladiator business was a rip-off.  So the local cops dressed up like gladiators and walked out to the area.  There....they got pounced by the dozen or so long-term gladiators.  A fight ensued.  Then some real cops in real cop clothing showed up to defend their buddies.

In the end.....twenty of these long-term gladiators were arrested....representing seven different families.  Various charges are going to be settle upon.  Beating on cops won't be a simple charge to beat in Rome.

I'm guessing you will walk around this weekend....and not find a single gladiator around the building.  But don't worry......after a month or two.....they will drift back.  You can't keep a corrupt modern-age fake gladiator down for long.
at Friday, August 12, 2011 No comments:

Over the last couple of days....I've been observing the video and commentary over the riots.

To start with....the beginning was a cop confrontation with a drug dealer.  There's one iron clad rule in the UK....you as a citizen must not walk around with weapons on you.  This drug dealer had a pistol and it was demonstrated somewhere in the confrontation, and the UK cops pull weapons on him.  Things went downhill fast, and the drug dealer is dead.

After that......we end with mostly think-tank analysis telling things that mostly don't fit well.  First, we are told that this is strictly a riot situation over the poor dead drug dealer.  That story lasted about one day.....because most folks aren't supportive of any drug dealer in the first place.  So, then we were all told that these riots were mostly about all the government funding cuts for the working poor of England.  Then we all saw the videos of folks robbing stores and it's mostly all young people (under the age of 25).  If working poor were suffering like the think-tank guys say....then there would be 50-year old guys out there (there weren't).

So then some guy from the Economist (a noted and worthy magazine)....came to discover that amongst all of the great robbery opportunities....the one store that the rioters simply would not touch....was book stores.   There was a comment that a store employee even dared the rioters to come forth and rob them....just to see if they might learn something.  The rioters just weren't going to accept that offer.

Amusingly now....with video shot all throughout the riots....there's this police effort to review images and visit houses.  They are arresting people and the threat of weeks or months in jail is a real possibility for at least a thousand folks.

One story this morning concerns some young gal studying Italian and English at a local university there.  The cops stopped her car and found lots of stolen electronic gear.  She's been detained and will face charges.  The university has said they are simply watching the episode and won't say much about what will happen.  Basically....if she is convicted....they have the right to dump her from enrollment.  The odds of another public university in England picking her up?  Zero.  So at 19 years old, and probably very intelligent....her entire life will fall apart in the next month if the court convicts her of having stolen items in her possession.  She will become.....in essence....a permanent bar hostess at best.  A sad end to a dim-witted moment.

As for the think-tank guys.....they might want to put a bit more effort into their journalism.
at Friday, August 12, 2011 No comments:

There is this little story out there...mostly in business or economic areas....which the national news probably won't carry.  Walgreens is discussing the idea of offering health insurance.  There's not a lot of description to this....mostly because Walgreens is simply talking right now....nothing else.

So settle back and imagine this picture.  Walgreens offers up six different plans to fit various folks.  They start hiring these guys from various third-world countries who have doctor degrees.  They hire up physician's assistants.  They hire up some fairly smart nurses.

You go and buy package "A"....for a single guy....$699 a year for out-patient care only.  You call up the local Walgreens about a problem...show up at 7AM as you drive to work.  You pay $12 as your deductible, and he writes out this great prescription for a Walgreen's discount drug that only costs you $9 for a full ten days of drugs.  If they only have a nurse on duty....no problem....a VTC is set up and the nurse checks everything and talks to Doctor Hun from China who sends a prescription over the fax to the local Walgreens for your ailment.

You go and buy package "B" for a family....$999 a year for out-patient care only.  Your deductible is $10.99 total.  Same deal for the prescriptions being discount and cheap.

You want the full-up in-patient and out-patient package?  $499 a month for a single guy.  You have to use one particular hospital in the local area.....but everything gets covered and all your drugs are via Walgreens.

I suspect at the heart of this matter....Walgreens suspects that the President's health care program is to be tossed out by the Supreme Court.  They will waltz into the mess with this five-star program that fits the little guy better than any program in America.  Discounted drugs, cheap policies, a doctor in every Walgreens and an established name.  Within weeks after this....Wal-Mart buys up Walgreens and builds this into a five-star medical cheapo program that would even make Ronald Reagan weep.
at Friday, August 12, 2011 No comments: