There is anticipation in the air this morning.  We here in the DC area are now in a tropical storm warning situation.  Living in Virginia....it's hard to imagine any kind of warning containing the word "tropical".  Some of the local guys might be thinking tropical drinks....tropical women in lusty hula skirts.....or a slight tropical breeze.  But Irene is a bit more than that.

So like most....I've been out shopping....water, a six-pack, bread, bacon and cookies.  It's enough to sustain a guy for three days....maybe four.  Most of the area where I am....have underground cables...so electricity will continue on.  I'm way up on elevation, so it could surge forty feet and I'm safe.  The Metro?  Well....they might actually shut things down by Saturday afternoon.

The kindly folks of DC....did come up and cancel the Martin Luther King Memorial grand opening.  Well over 250k folks were anticipated.  I'm guessing at least 100k of them had hotel reservations....which they may or may not get off the hook.  The bus rentals?  Well.....probably over 500 buses had a plan to drive folks from half the US....into DC for Saturday.  They don't have an alternate day yet, but word is that it might be the first weekend of October.

The New York area?  Well, this is the most interesting aspect of the whole mess.  The mayor is hinting that over 100k folks will be forced to leave from the bay area.  There could be 300k folks by the time that Saturday morning arrives.....who get notice to pack and go.  Come Monday?  They might be on a wait-and-see pattern for the next five days.

So the biggest event of the year for folks in DC....just days after the earthquake.
at Friday, August 26, 2011 No comments:

Our noted journalists have picked up on a pretty fair situation in the upcoming Republican primary....the battle between creationism and evolution.  You'd think after the Scopes-Monkey trial....we'd had enough and it just wouldn't be much else to say.  But apparently, we've got some Republican candidates for President are creationism-believers, and some who are evolution-believers.  I've kinda noticed that the journalists have avoided labeling the President on this topic.....I'm guessing he kinda believes in anything you want him to believe in.

You can imagine Karl Rove standing there...mostly in disbelief....that out of 100 possible political topics that would come up to confront him....this creationism versus evolution topic would somehow not be on the list.  In all the time that he ever sat and discussed various topics with George Bush....I doubt the two ever engaged on this.

The sad thing is that the day will eventually come when some space ship arrives from the planet Zorg.  Harv gets off the craft and explains that his folks did some hybrid-experiments back about 100k years ago and developed man as he is today.....taking their DNA and Caveman Joe's DNA....thus combining both.  Both creationism and evolution will kinda be forgotten at that point.

As for how you should read through your favorite Republican candidate?  Instead of looking at their tan, or their words about macro-economics (something you just can't grasp), or latching onto their own Obama-Care medical program, or looking at their college grade point average.....you might ought to just flip a coin.  Considering how we've made it through eight years of GW and almost three years of Obama.....coin-flipping might be just as good on picking some guy.

And Harv from the planet Zorg?  Once he explains the whole hybrid thing.....we'll all have a laugh.....sip some beer together....and wonder how we were stupid to believe in evolution or creationism in the first place.  Then Harv will say he's come to America to get registered to vote....for Ron Paul.  And then our uneasy natural feeling will return....wondering if there's not some agenda here.  Maybe Ron got planted here by the Zorg folks, and we got another brand new problem.  Paulism.

I sat and tried to watch MSNBC yesterday evening....but they led off on how the evil Republicans were going to use the approaching hurricane as a threat against society.  I suspect that if anyone ever found any of Santa's mythical reindeer....then MSNBC would lead off on how the Republicans would exploit Comet, Donner and Vixen.  It'd be nice to turn on a news channel and actually get news.

It was a curious meeting....Attorney General Eric Holder and a dozen 9-11 families.  The topic was potential hacking of loved one's cellphones.  So after they meet....the result?  Eric kinda admitted there was no proof of News Corp (the evil Rupert Murdoch company) having hacked into their phones.  The Attorney General did hint to the group that three sections of US code could have been violated....but he couldn't sustain any comment with proof....just hints.  I sat and pondered over this....probably over 100k hacks of voice-mail or e-mail yesterday alone occurred, and how no one much in the Attorney General's office will move an inch over any of them.   Those are fresh and you'd think easier to trace out.  Toss in a couple hundred thousand stolen identity thefts in the US....which the Attorney General does nothing about, and you just kinda laugh.

The Census guys did some odd numbers game and came out yesterday with this valuable information....if you live in the Northeast part of the US....it's a higher chance you will stay married longer.  I sat there wondering what idiot would care about such numbers and if they really meant anything.  They wanted you to know that marriage rates are at a all-time low.....but South and West folks are marrying at fairly healthy rate but divorcing quicker too.  Then came this comment from Andrew Cherlin (professor of sociology at Johns Hopkins University)...."The reason is that young adults in the South and West tend to have less education and marry earlier, both of which lead to a higher risk of divorce."  Yep, if only we poor rednecks were properly educated and stayed single till thirty.....then things would work out and we'd all marry hot intelligent older semi-lusty gals in tube tops, sit around and discuss Walden's Pond, drink only Cherry Coke, and grasp our gal Wanda was a perfect match.  Yeah, in a Matrix world....that just might be true.  Sadly, in Bama....we are condemned to the eternal 50-50 chance. 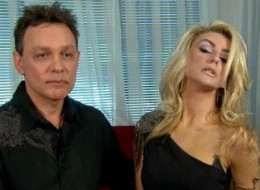 Word now is that Courtney Stodden (age 16) and Doug Hutchinson (age 51) are now working on a reality TV show.  Doug, you may remember did some time on "Lost" and starred in the Green Mile.  Basically, it's a thirty-minute show on how some guy handles a immature teenage wife at age fifty, avoiding heart attacks, and entertains folks watching.  I sat and pondered over this.  Once guys start to watching this....I think 10k older guys (in their fifties) will be on the prowl to find themselves a 16-year old gal to hook up, and we'll have a rash of marriages going on.  Eventually, Doctor Phil will pronounce a national problem.  And then some forty-year old gal in New York City will marry a sixteen-year old kid....developing her own reality series.  Can't we just watch reruns of Bewitched instead?

Finally, back on Monday....some Dutch guy and his German girlfriend came out to Death Valley....drove off the main road....had their car break down....and tried to walk out.  Seven hours later.....their bodies were found.  It was around 105 at the peak of the day.  I suspect they weren't carrying any water in the car as they drove out through Death Valley.  It's a sad end to be in such a predicament.  I lived in Arizona for several years, and typically carried at least a small bottle of water around with me in in the vehicle.  The truth is that you can sustain yourself for a day....if you stay in the shade and not exert yourself.    The minute you start walking in the middle of the day....with no water on you.....you've got maybe three or four hours of life left.
at Friday, August 26, 2011 No comments: