Down in Florida...the state legislature passed this law....which basically says that if you want state welfare money....you have to provide a urine sample, if asked.   Yeah, a plain drug test, mandated by the state government.  Well....today, it got to the federal judge level and he suspended it (at least temporarily).  Most experts figure it will be halted somewhere in the process, because you just can't start this ball to rolling on mandated drug testing.  Ask yourself these questions.

What if some idiots decided that county and state judges should also provide a urine sample once or twice a year?

What if some idiots decided that county and city commissioners also needed to provide a drug sample once or twice a year?

What if some idiots decided that mayors and the governor of the state also needed to provide a drug sample once or twice a year?

What if some idiots decided that all police (city, county, and state-level) also needed to provide a drug sample once or twice a year?

What if some idiots decided that firemen from across the state (even volunteer firemen) also needed to provide a urine sample once or twice a year?

What if some idiots decided that school teachers across the state needed to provide a drug sample once or twice a year?

You can imagine this sudden rush by various special interest groups that would suddenly get worried and demand an immediate stop to this madness (yeah, reefer madness might be appropriate).   The truth is that probably thirty percent of the folks in any state are likely on some extreme prescription drug episode (more than the legal amount), or on some steroids, or on some type of recreational drug (take your pick from fifty different types).

We could even go and require county guys who mow the grass on the side of the road.....to have urine tests....and they'd likely be very vocal that this wasn't fair.

So it's best if we just forget this drug-testing frenzy...it'll just get tossed out the back of the bus as we finally hit the legal circuit. 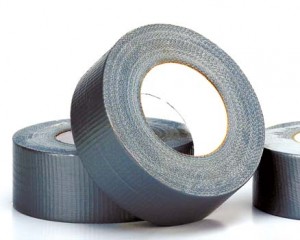 If you've ever been to Europe.....and flown around on discount airlines....then you've flown with Ryanair (the Irish guys).  They generally offer these $40 seats from some airport way out in the middle of nowhere....to some location in Italy or Spain or England.....which is also way out in the middle of nowhere.  You know the waiting lounge because it looks like some bus stop in Topeka, Kansas.....all plastic chairs and some decorations on the wall from 1970.

This week.....Ryanair was caught by the passengers on one flight....from England to Latvia.....fixing a cockpit window, with duct tape.  It was apparently standard practice and no one from the crew acted defensive when they got caught.

I sat and pondered over this.  The truth is that most every guy in America has a roll of duct tape in his work shop, his desk drawer, his truck, and on the tractor.  We won't hestitate to pull out duct tape and use it for just about any repair.  If a guy had a knife injury to this leg....we'd likely pull out the duct tape and even wrap up the wound with it.  There's no limit to one's imagination when it comes to using duct tape.

So I sat over this idea of a plane window having issues.  Yes, I would have accepted the duct tape.  Frankly, that probably should bother folks....that I have that level of acceptance of a jerry-rigged answer or solution.  Here's the other thing that should bother you....there's probably well over one million Americans who also have that level of acceptance.  That ought to worry a whole bunch of you folks. And it says something about our society, and Ryanair.....we aren't terribly fearful of risks.
at Tuesday, October 25, 2011 No comments:

The Return of the Saga: Gold Rush 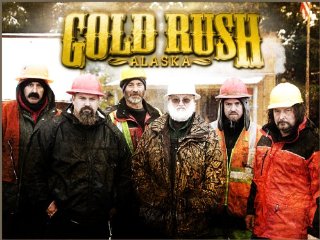 We are just days away from “Gold Rush” returning on the Discovery Channel (28 Oct).

There's only two or three reality shows on TV that I'd rate as four-star.  Gold Rush is one of those shows.  Sadly, the other side of this story is that it's probably the most fake reality show of them all.

None of the stories for the characters really ring true.  Most are half-true, with a fair amount of fabrication. Why would I watch it?  I think it's the theme of the story that interests me....a bunch of guys running off to Alaska in search of some fantasy.  Toss in 3-hour evenings, bears waltzing into camp, beans over a campfire, and nothing ever working right....and you've got a fairly dramatic but fake show.

I wish I could be a script writer for the show.  I'd have some Brittney Spears gal show up and claim she was pregnant with the boss's kid.  I'd toss in some mystery guy who shows up from New York City and claiming he had a vision over where the gold is located.  I'd probably even introduce some midget wrestler from Florida who comes up and asks for a job with the crew.  There's tons of potential. 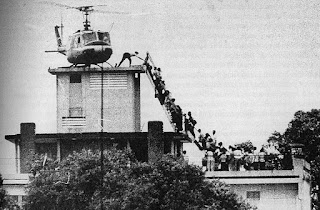 Since the President's announcement of the Iraq War pull-out....this photo has gotten dragged out to be some visual reference as to the end of the Vietnam War and how things ended there.

I always had a fascination with this picture, but not for the obvious reasons.  For me....I was amazed that the building structure on the roof was able to sustain the helicopter.  This was Vietnamese construction and based on conversations that I had with various folks who spent time in Nam....you had version one (the French-mandated heavy concreate) and version two (the cheap local construction).  I always thought it was a miracle in itself that the roof structure didn't collapse.

The other curious thing about this shot....is that no among the guys on the roof came to realize that the chopper might hold eight folks max.

As Iraq comes to an end....there will be this one defining shot where you see some General or some Private stepping onto a chopper, and you have this image in your mind of "the end".  Some reporter is there in Iraq today....and he's trying to imagine the right moment, the right angle, the right shot, and the right message in the picture.
at Tuesday, October 25, 2011 No comments:

Yesterday, we finally got Rick Perry's tax solution laid out.....the twenty-percent flat tax.  I'd call it the "20-20" plan, where he wants the corporate tax and personal tax both to be set at 20 percent.  No sales tax episode, compared to Cain's 9-9-9 deal.  You'd basically fill out a postcard and send it in.....no tax forms or four hours with the fancy-pants tax consultant.  Mitt won't be going this direction....he'd rather keep the current system, with some modifications.  For some reason....folks might overlook Perry's shortcomings and agree to this flat tax idea.....and that might be enough to win thirty-odd states in the primary season.  The question is.....could he get more than half of America to vote for him because of the 20-20 deal?  I suspect folks might be interested in a flat tax, but they probably don't want Bush era 2.0 to be tossed at them.

There's this story in the Washington Post....the Obama White House is discussing this idea of applying the anthrax shots to kids.....to kind of test it and answering some lingering questions.  Even with all the bad guys mostly gone in the world.....there is still this fear of anthrax being developed as a weapon.  Insiders of the science community keep tossing this back into debate.  My personal suspicion is that they must know of some nut....maybe even from the US science side of the house....who has made a threat or two.  It's kind of like the idea that a sixteen year old kid can today build a nuclear bomb in the garage.  Maybe the same kid could build a lab and somehow develop anthrax.  Of course, you wouldn't want to admit in public that kids are that smart or that a garage lab might be this capable. It's just kinda odd that bad guys keep dying off left and right, yet we still make this vaccine a priority.

The news guys apparently discovered the brother of singer Madonna is some homeless guy who lives under a bridge up in Michigan.  I sat and read over the story.  The curious thing is that thirty thousand guys in America are living under bridges.  Most of them don't have anything special about them.....but this one guy is a brother to Madonna.  I kind of pondered over this.  From my view of homeless guys in DC....most have some kind of mental or emotional issue, and the majority would turn down an optimistic offer of real help.   The majority just want a barracks-like setting where there's a bed somewhere, three hot meals, and they get to just walk around all day.  I can't speak to this guy in Michigan.....he might be eager to get a real job and live a real life.

A number of folks are upset over the sudden demise of Col Gaddafi (just shooting him without a legal proceeding was insulting, or at least they hint that).  Then they've come to realize that he might have been sodomized in the final minutes before death (which laws tend to all prevent, if they had only been enforced).  The thing is....when you live in a unsafe neighborhood and all the bad folks have tossed the rules for decades....you just don't think about such pleasant things as decency or legalities.  For those who want to emphasize how terribly upset they are....maybe they should have lived for a year or two in Libya and experienced up close and personal.

The word is that Lindsay Lohan will pose for Playboy.  I pondered over this for ten seconds.  Out of a hundred guys between 21 and 40 today.....I doubt that you could find more than three that have picked up a Playboy magazine.  Playboy says that around ten million Americans read the magazine regularly.  I suspect it's mostly inflated numbers and it might be less than three million.  Would Lohan make things special?  No.  All you'd see is some doped up freaky Hollywood washed-up actress who is spending what little money she has left.  Frankly, they'd best offer up some four-star interview with Putin, and some fantastic advice on stereo equipment...to interest me in a one-time purchase.

Finally, there's a report going around the internet that the South Park guys were being targeted for investigation by the Scientology guys back five years ago when they did a cartoon covering the religion.  As the story goes....they dug into phone records, airline tickets, and even bank records.  Then they even tried to get some young punk "insider" intern guy to be hired by Trey and Matt.  It would appear that as much as they wasted time and money on this effort....nothing much ever came out of it.  The comical thing is that if Trey or Matt had ever realized the ongoing effort....they would have done an entire episode over Scientology again, and made them look a bit foolish.
at Tuesday, October 25, 2011 No comments: