A Question, An Answer, and Another Question

Google folks came out last week with this odd picture from China. 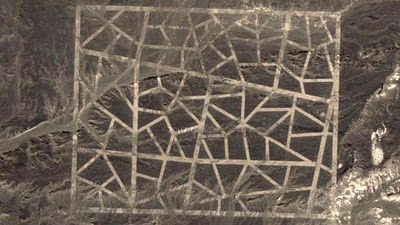 For about a week....folks were puzzled by this....and then finally came to agree....it was designed so that Chinese engineers could calibrate their own spy satellites.  It's a logical explanation and fits pretty well.

I sat there for a few minutes reading through the commentary and thought it laid out in a pretty smart fashion.  No issues here.  This ought to close the book on this curious question. 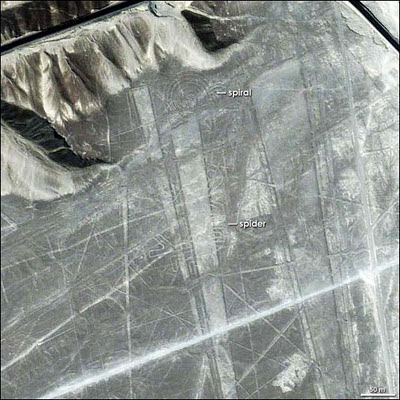 The sad thing here....is that I kept thinking about this.  And there is this other problem.....if this logic works for the China picture, what about the lines down in Peru?

They work in the same fashion.  An odd design.  You wouldn't really notice them unless you were up around twenty thousand feet or higher (or in space).

So the odds that they were built to calibrate ancient Peruvian spy satellites?  It's best not ask, but it leaves another question.  At least in my mind.

The sad thing is that the History Channel will end up with a two-hour special on this possibility and attribute it to some guy from Bama who writes a blog.
at Friday, November 18, 2011 No comments:

An update of sorts....I reported that AK-47 shooting toward the White House a couple of days ago.  Cops finally caught the guy.  From what has been said from the guy....he thinks the President is the anti-Christ, and that he (the shooter) is Jesus.  Almost every single federal attorney will be sitting there and hoping they aren't the one stuck with prosecuting this case.  Some mental exam will be required, and it could be an entire year before this ever comes up in court.  Meanwhile.....the other four-hundred and thirty-six folks who think they are Jesus....will be upset and likely conveying to folks that this guy is the fake one....but they are the real one.

The budget guys for Detroit came out and admitted yesterday that the city will run out of cash in December....just a matter of weeks.  The mayor is kind of stuck.  He could lay off 2k employees, and scratch some services in town, and just try to slide by for twelve months while they reshape their operations.  The problem is that the unions will take this to court.  Judges will be involved.  From the three news sources I read.....the whole town is counting on the state government to save them in some fashion.  Frankly....ninety percent of Michigan would probably prefer that Detroit burn to the ground, and will not offer much assistance other than police and fire department funding.  I would wish the city some luck, but frankly...it'd help if 100k residents just packed up and left.  It's a town that ought to be half the size that it currently is, and ought to have a federal administrator run it for five years.

Finally, the head tax guy for the GE corporation admitted that they finished up the 57k page tax return for the company.  They owe ZERO dollars for taxes.  How?  First, they spent alot on tax credit schemes that Congress arranged.  Second, a good bit of this money was earned overseas, and stayed overseas.  Third, reinvestment into wind energy and solar energy earned a bunch of credits.  Most folks are shocked, and a bit angry over this.  Fourteen billion in earnings, and not a penny in taxes.  Who made this possible?  Your friendly Senator or Congressman.....who has no training in writing tax code, but certainly took what they gave him, and inserted it into some bill.  The Occupy crowd ought to comment on this.....and slam congress for writing all these rules.  But they don't really grasp the situation.
at Friday, November 18, 2011 No comments:

METRO (our subway folks) came up in the local news today.  One of the unions that provide METRO employees has finally got all upset....about the sanitary condition of buses operated over on the east part of town.  What they hint.....is that the bus depot isn't as aggressive as the other depots around the region (Arlington, western DC, Maryland, etc)....on cleaning up the buses.

The media asked a bunch of questions....and the union guys finally came to admit that folks urinate on the METRO buses over on the eastern side of the town all the time.  So the necessity of extra cleaning is required.

Now, I'm one of the very folks in Arlington.....who has riden the METRO system over into Anacostia, DC.  The minute I got on the bus.....you could smell it....4-star urine, and the yellow stains were pretty visible.  I rode for eight minutes, and really wanted to get off pretty bad.  Most buses are cleaned down and hosed every night.....but the folks are back the next day.....urinating as though there's no issue.

It's a behavior issue.  You've got forty-odd guys who like ride the bus daily......who really ought to be put into a quarantined place and never allowed into the public.  Across DC....I would imagine that a thousand folks (sorry, but there are lots of homeless folks who are now problems) need an environment that limits them....like a forty-acre park with a fence around it, and one-hundred square foot cabins where they could live out their lives in peaceful existence without bothering the rest of mankind.  It's a sad way to go.....screwing up things for innocent folks and really having not a care in the world about the mess you create each day.

As for the METRO drivers.....they are right on this issue, and not one single DC politician will stand up to agree with them.  It's kinda like having ten thousand rattle snakes let loose in DC, and no one wants to deal with the problem because they'd look bad for being anti-snake.
at Friday, November 18, 2011 No comments:

Made in The Bottle: Jack Daniels

You can imagine the shock.....you have the only company in town that brings jobs to the area, and tourism.  Some guy goes to the city council, and wants them to add a special fee onto your product.....a tax for all sincere purposes.  Your company?  Jack Daniels, of Lynchburg, Tennessee.  The fee?  Ten dollars a barrel for each barrel of whiskey produced.

The curious thing is that Michigan's state house speaker, Jase Bolger, stood up and basically offered up an invitation for Jack Daniels to move to Michigan.  The chief feature?  Lots of fresh spring water.

So the emphasis of this deal is one guy who put the tax up to the city council and knows that Jack Daniels is the only company in town.....employs well over 250 folks in some fashion.....with lots of locals handling tourism and folks just passing through who want the tour.  There's no other real business in this neck of the woods.

If I were Jack Daniels management.....I stand back and this practical view of the situation.  The original Jack selected the local area because of the springs.  There's nothing else anchoring them down....except an investment of probably three million in real estate and production buildings.  The whiskey could be made just about anywhere.  Lynchburg is on the label.....but you could be tricky about this and pick some location with a practical name......and no one would care about the move.  The cost of the tax?  I'm guessing that the company could pass this bill onto customers and the city might raise a half a million.....maybe more.  Whiskey, for you folks....is not suffering during this depression.....mostly because lots of foreign folks are now buying the stuff. 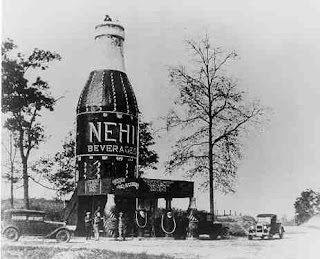 I pondered over this.....and eventually thought.....why can't Bama offer up a town?  Then it hit me.....there's a town down south in Bama.....called "The Bottle".  This is no joke.  It's a mile or two away from Auburn, and there'd be thousands of dedicated Bama folks prepared to help Jack Daniels out.  The catch phrase?  "Jack Daniels, distilled by The Bottle".

To be kinda honest, it is basically the intersection of U.S. Highway 280 and Alabama Highway 147, and I doubt that there's a mayor or town council to deal with.....which makes for an interesting situation.  Jack Daniels and company could buy all the acreage.....put in three homes, and ask the county council to give them a city certificate.  The CEO could serve as mayor, and they'd have enough real estate to prevent any idiots from ever coming up with a stupid fee/tax on each barrel ever again.

In fact, folks from Bama would be willing to take up their hay and cotton wagons.....to run up to Lynchburg, and help Jack and company move to The Bottle.  It'd be the neighborly thing and we'd likely cross over the border of Bama.....with the cotton wagon loaded down with twenty barrels of whiskey, and start weeping as we drove like a bat out of hell to south Bama.  Never in a thousand years.....would we have guessed that Jack Daniels could be enticed to come to Bama....and the Auburn folks will attest to the fact that there won't be no dry issues like there were in Lynchburg.

Somewhere out there....some Jack employee will eventually read my blog....talk to the boss.....and pull out the map.  Someone will ask questions, and eventually, a miracle might happen (kinda like bringing Cam to Auburn last year).

And for the guy who felt a tax on Jack Daniels was necessary.  You might want to think about the implications of one act of stupidity.
at Friday, November 18, 2011 No comments: